Stagecoaches of the Wild West

Every time I see a stagecoach in an old movie, I yearn to own a time machine! Wouldn't that be fun? Oh, I wouldn't really want to live back in the days when stagecoaches were the "long-haul taxi cabs" of the West - but I would love to take a ride in one!

It would be a "rollicking ride", because they had to cover a lot of rough terrain, and the wheels were certainly not covered with rubber tires as we are accustomed to, today! Samuel Clemens, a.k.a. Mark Twain called stagecoaches "cradles on wheels"!

The marvelous 19th Century Abbott & Downing Stagecoach shown above, is actually for sale, from Cowboy Cabin in Montana. There, a lovely couple, Ron and Eila Turner sell a few very unusual collectible Western treasures. They were kind enough to let me use a photo of this stagecoach, to introduce you to some Stagecoaches of the Wild West. Beautiful, isn't it?

Stagecoaches in U.S. History - From days gone by...

I wonder if we fully appreciate the role stagecoaches played in the history of America. As beautiful as some of them are, settlers in the 19th century did not view them as we do. To us, they are a romantic, quaint, bygone mode of transportation. To them - they were a means of transportation, and often - survival.

Stagecoaches were built for utility and endurance; they had to carry passengers, mail, gold, silver, baggage, and arms. Companies that built them made them high enough to ford rivers, tough enough to traverse rocky terrain, climb narrow mountainous roads, and to withstand the blistering heat of summer and the freezing cold of winter. Some stagecoaches were constructed so sturdily, that many of them survive intact - today!

The years between roughly the 1750's and the 1920s are generally viewed as the "life of the stagecoach". They were in their "heydays" in the 1800's, being the standard "vehicles of choice" for transporting mail and passengers safely across long distances.

Indian attacks, dangerous wild animals, runaway horses, and armed robbery were a common fear among the passengers, but they weren't supposed to talk about it. It was almost "taboo". There is an excellent article on Wikipedia that even lists some of the rules for "etiquette while riding in the stagecoach". It is worth the reading!

Oh, by the way - the name "stagecoach" refers to it being the mode of travel between one stop, or station, and another; a "stage" of the journey. So, it was a coach that took you between your "stage" of departure, and your "stage" of arrival; hence, a stagecoach!

A Stagecoach of your own! - Franklin Mint Wells Fargo Stagecoach Reproduction 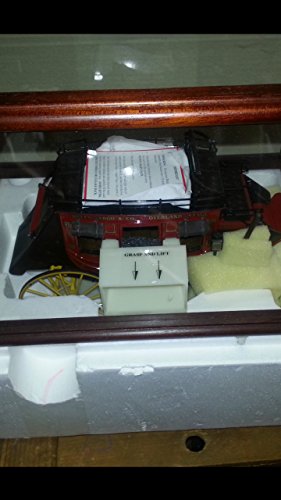 This stagecoach is a collectible from the Franklin Mint, offered on Amazon. A real treasure for "stagecoach lovers", it is a painstakingly done scaled-down model of one of Wells Fargo's famous stagecoaches that was in use in the 19th century. You will be delighted with the workmanship and detail. A must, if you are a serious stagecoach fan! Throughout the year, Wells Fargo puts one of its authentically reproduced, "Wells Fargo approved" stagecoaches on tour, in various locations across the United States. It is quite a site to see, all shiny and elaborately decorated, complete with stagecoach driver and horses.

Sometimes, the stagecoaches are merely on display, other times they become part of a parade, and on occasion, they are available for rides. If you take a ride on one of their stagecoaches, at least you'll be safe. The days of the stagecoach robberies are thankfully - over!

A Stagecoach Set For Youngsters

Boys and girls today still thrill to hear the tales of the Wild West, and love to play cowboys and Indians. Stagecoach toys are a perfect way to teach your little ones a bit about American History, in a manner they will never forget. What child wouldn't wish to play with their very own stagecoach?

This Big Country Western Playset comes complete with a stagecoach, horses, a windmill, several cowboy figures, a corral, a covered wagon, a general store and much more!

In our present age, so many children are relegated to electronic devices for amusement. These are toys, that automatically provide parents with a fun way to tell their children how mail used to be delivered, how dirty it used to be to travel, and how dangerous travel could be. We have added, scattered throughout the article, a few stagecoach toys we found, that would make great gifts for any child, from Amazon.

Indian Attacks - Not the least of the passengers' worries...

Other Attacks That Stagecoach Riders Feared

History reveals that stagecoaches were attacked by several different Native American tribes, in the Wild West. Some of the tribes accused of the attacks, were the Apaches, Sioux, Arapahos, Cheyennes, Pawnees, and Kiowas, but there were others. When ambushed by Indians, one of the greatest fears of the stagecoach passengers was being scalped, before they were killed. That alone, kept many travelers at home.

Equally as feared as Indian attacks, were the armed bandits who preyed upon the stagecoaches on their travels. Some of the most famous of them were:

there were others, many who had to meet their reward at the hands of their Maker!

Although stagecoaches were subject to danger from marauding Indians, and robbers - a little bit of research will show that they were just one of the many things that terrified some of the passengers. Over the years, stagecoaches journeys were often delayed by breakdowns, just as we deal with dead batteries, flat tires, and mechanical malfunctions that happen to our automobiles, today. That wasted valuable time, and often left the passengers stranded until either help came along, or more usually, the stagecoach was repaired.

In addition, there were no "frequent rest stops" along the way, and passengers often had to fend for themselves until the journey was resumed. Sometimes, there were "engineered breakdowns", either from obstacles put along the route, or corrupt stagecoach drivers and occasionally - passengers.

He should have been known as the reluctant rider!

Most people think of Black Bart, the pirate - when they hear that name, but actually several "Black Barts" have decorated the annals of history. Our Black Bart was a notorious, gentlemanly, debonair stagecoach robber, who wreaked havoc on stagecoaches from 1875 to 1883. The Wells Fargo stagecoaches drivers along the Siskiyou Trail that runs between California and Oregon, were always on the lookout for him.

Born in England, as Charles Boles, he came to America with his nine siblings in 1831, when he was two years old. His family settled in New York, but he headed west to California during the Gold Rush Days. He served honorably in the Union Army during the Civil War, and later married and settled with his family in Illinois. Restless after a few years, he headed West again, where he eventually took to a life of crime, supposedly spurred by a story he read in a newspaper about a villain who robbed stagecoaches, named Black Bart. That's all it took - and a legend was born.

One interesting bit of trivia, from Wikipedia, is that our polite robber committed all of his crimes on foot. Horses terrified him! Another, is that one of the Wells Fargo detectives that was actively involved in attempts to bring Black Bart to justice, looked so much like him that people said he could pass for his twin!

Well over 20 stagecoach holdups were attributed to his hand, but he was only prosecuted by the Wells Fargo company, who persued him relentlessly - for the last one.

If you love to read about some of the stagecoach robbers from the Wild West, you will enjoy this book.

The capers of Black Bart are here, Shorty Harris, and Jack Allen, among others. The author has done a marvelous job researching stagecoach robberies, and bringing them alive to the reader. Don't miss it!

How well do you know your Stagecoach Robbers?

We are all familiar with some of the Wild West outlaws, those daring, fiendish men who preyed on travelers and stagecoaches drivers. Evidently most of them thought that robbing a stagecoach was "easy pickin's".

How familiar are you, though? From the three options below, which ones NEVER robbed a stagecoach?

The correct answer, is at the bottom of the page....

Which one is innocent - of stagecoach robbery, that is...

Where Can I Take a Stagecoach Ride?

There are a few places where you can still take a stagecoach ride today! One of them, is at the annual Chuck Wagon Gathering and Children's Cowboy Festival. It is held in Oklahoma City, at the National Cowboy and Western Heritage Museum. For more information, check out their information, here: Travelok: Mamas, Don't Let Your Babies Grow Up to Be Cowboys

If you live near Knott's Berry Farm, you could also take a stagecoach ride there. For information, check out: Butterfield Stagecoach Rides

Prepare yourself for some great reading in this detailed book about some of the stagecoach robbers and robberies. Have you heard of Pearl Hart, the "petticoat bandit"? How about William Brazleton, who put shoes on his horses backwards, to confuse the authorities? These two are just a couple of the stagecoach robbers who ruled the Old West. In the book, you will meet many more!

NOW, for MY stagecoaches...

All right --- they are not mine. That was merely wishful thinking, because I wish they were. The top one, is the Irish Royal State Coach, and the bottom one is the English Royal State Coach. I have a mirror in my jewelry store that is very ornate, and gilded, and huge, literally - but it cannot "hold a candle" to the opulence displayed here. Not from the Wild West, obviously - but thought they were worth a look, and they certainly have the right shape to be a "stagecoach"! I guess I misread the titles. I must have thought that they said "Irish Royal Stagecoach" and "English Royal Stage Coach". Have to check my eyesight...

This is quite an unusual item for stagecoach lovers - a ceramic tile mural of a stagecoach rounding the bend on a dusty road back in the times of the Old West.

The mural could be used as a kitchen backsplash, or the tiles cemented onto a piece of plywood, and trimmed with wood to make an unusual serving hot plate.

Of all the stagecoach items we have encountered, this tile mural has to be the most interesting!

Love to read trivia about stagecoaches? - Here are some links for your reading pleasure...

You know, I just love stagecoaches, and the more I read, the more I appreciate them. Below are some links that are just plain "good reading" - all related to the "Stagecoach Era". I hope you enjoy them as much as I have!

The Answer to the Poll is...

Billy the Kid - he was innocent - but only, of stagecoach robbery.

Have you ever taken a stagecoach ride? Do you like the way they look? Would you like to own one? Did you like our article here? Please tell us what you think...