This is part 1 of a 4 part hands-on unit study on Weather. Conduct experiments and demonstrations on how the sun, soil, and water affect the seasons and weather, dramatize the Earth's revolutions around the sun, and more! My lessons are geared toward 2nd-3rd grade level children and their siblings. These are lessons I created to do with a weekly homeschool co-op. We meet each week for 2 1/2 hours and have 14 children between the ages of 1-13. Use these fun lessons with your classroom, family, after school program, camp, or co-op!

1. Stretch. Pray. Discuss Genesis 1:14. Ask children, "How does God cause the seasons and weather to change?"

2. On a white board or on a large sheet of paper create a lab board to record what we learn. Write: "Experiment 1: Soil vs. Water" and "Experiment 2: Up vs. Down."

YOU WILL NEED: whiteboard and marker or large sheet of paper and marker

YOU WILL NEED: 1 thermometer, 4 identical disposable cups, & 2 cups of soil

5. Read a book on what causes the seasons: Sunshine Makes the Seasons.

YOU WILL NEED: book: Sunshine Makes the Seasons

Sunshine Makes the Seasons (Let's-Read-and-Find-Out Science 2)
This is a great factual book with fun illustrations. My children also really enjoyed "Spring, Fall and In Between" by Solveig Russell (which mentions that God controls the seasons) and "A Book of Seasons" by Alice Provensen which has delightful illustrations.
Buy Now

6. Divide the children into groups of 3-4. They will rotate between Stations 1-3.

YOU WILL NEED: a lamp and a globe

YOU WILL NEED: a flashlight, a globe, a piece of paper, & 2 markers of different colors

c) Station 3: Revolving Earth: Seasons occur when the titled Earth revolves around the sun causing the direct rays of the sun to fall in different regions. Using a globe, have the children identify the Northern & Southern Hemispheres, the North & South Poles, and the Axis. Mention how the Northern and Southern Hemispheres are in opposite seasonal patterns. Place a lamp (without a shade) on a small table or chair. The lamp represents the sun. Let each child take a turn carrying the globe in a revolutionary course around the "sun" by following the below 2 steps. Have everyone mention in which season the Earth is during each revolutionary course.

-Stand with your body facing the sun and hold the globe so the North Pole is tilted toward your body. (The Northern Hemisphere is tilted away from the sun = winter)

-Keep your body facing the same direction and walk in a revolutionary course around the sun until your back is toward the sun. (The Northern Hemisphere is tilted toward the sun = summer).

YOU WILL NEED: a lamp and a globe

7. Bring everyone together again. Ask the children, "What causes the seasons?"

8. (If you are not limited by time) Read The Magic School Bus Kicks Up a Storm: A Book About Weather.

YOU WILL NEED: The Magic School Bus Kicks Up a Storm: A Book About Weather. 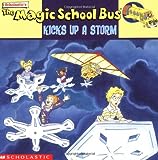 The Magic School Bus Kicks Up A Storm: A Book About Weather
This is a cute, simple story that emphasizes how water, moving air, and heat from the sun create weather conditions.
Buy Now

9. Warm air rises. Check the thermometers (from Experiment 2: Warm Air Rises) on the ground and very high in the room. Note that the one that was placed higher may be 1 or 2 degrees higher in temperature. Ask the children why they think this happened (because heat rises). Have a child record the temperature on the lab board/paper.

10. Have the children use the thermometers to check the temperatures of the cups of water and soil outside. Have one of the children record the temperatures on the lab board/paper. Note that the water is cooler than the soil. Ask, "Why?" (Dark colors absorb more heat.) Ask, "Which surfaces on the earth are dark? (soil, forests) Which are light and shiny? (water, snow, ice)

11. Check the temperatures of the water and soil in the refrigerator. Have one of the children record the temperatures on the lab board/paper. Ask, "What does this show us about water and soil/land and its effect on weather?" (Water cools slowly and land/soil cools quickly. Water heats up very little in the sunlight and cools off very little in the dark. Land heats up a great deal in the sunlight and cools off quickly in the dark.)

YOU WILL NEED: blue bed sheet or towels and a lamp

13. Look at paintings showing different seasons. (I used A Child's Book of Art: Great Pictures.) Ask children to name what the artist did or used to show what season it was. Ask the child to think of their favorite season. Using watercolors, markers, or colored pencils, have each child draw an outdoor scene showing his/her favorite season. Encourage them to use clues using weather, plants, animal behavior, and/or people's clothing. Paint/color while listening to Vivaldi's "Four Seasons."

A Child's Book of Art: Great Pictures - First Words
This has been one of my children's favorite books since they were toddlers. I love it so much I have given away many copies as gifts. This is the book I used to show the season in art. The author shows "Spring" by Monet for spring, "Wheatfield with Reaper" by Van Gogh for summer, "Autumn Leaves" by Millais for autumn, and "The Hunters in the Snow" by Bruegel the Elder for winter.
Buy Now

14. Review of Seasons Snack. Give each child a napkin, a vanilla wafer, a grape, and a toothpick. Have them stab through the grape to make Earth on its axis. Have them show you what causes seasons if the green grape represents the Earth and the vanilla wafer represents the sun. [The grape (Earth) should rotate around the vanilla wafer (sun) on its axis, sometimes with its Northern Hemisphere closer to the sun & sometimes with its Southern Hemisphere closer to the sun.] Give each child a few more vanilla wafers and grapes and let them eat them.

YOU WILL NEED: a box of vanilla wafer cookies, washed grapes (preferably green) already taken off the stem, 1 toothpick per child, & 1 napkin per child

15. Homework: While children eat their snack, pass out weather charts (a grid with 7 boxes and the word "temperature" written at the bottom of each box) to each child. Instruct them to record the weather (either by drawing it or writing it) and the temperature each day that week.

*Everyone needs to bring per child:

*Items to be assigned to individuals to bring for the entire class:
(Some items are repeated because you will need multiple ones of those items.)

Reason for the Seasons

Ready for the next lesson?

Make tornadoes and clouds in a bottle, create and use rain gauges, dramatize a storm front, design and eat clouds, race against prevailing winds, and more during this exciting 4 part unit study on weather and meteorology!

Looking for All of My Units and Lessons?

Over the years I have posted over 30 science and social-studies based unit studies, compromised of more than 140 lessons. For each lesson I have included activities (with photos), our favorite books and YouTube video clips, lapbook links, and other resources. I posted links to all of my unit studies and lessons at Fun, FREE Hands-on Unit Studies .

Would you like to teach this way every day?

I use Konos Curriculum as a springboard from which to plan my lessons. It's a wonderful curriculum and was created by moms with active boys!

If you're new to homeschooling or in need of some fresh guidance, I highly recommend Konos' HomeSchoolMentor.com program! Watch videos on-line of what to do each day and how to teach it in this great hands-on format!

Which is your favorite season and why? - Or just leave me a note. I love getting feedback from you!