Being a baby boomer myself, I have only heard the boomers being bashed by baby boomer haters. Saying that we are the most selfish generation. I can't accept that to be true, maybe there are some that are, but that doesn't and shouldn't apply to everyone.

Funny I am a baby boomer and I have not once seen myself as being selfish. Looking at my siblings who are also baby boomers and are older then I am. They have been the most caring and dedicated people that I know.

We seem to care about the well being of our children and grandchildren and most Baby Boomers would do anything to see them succeed.

Baby Boomers may be accused of being in a self indulgent era, being materialistic people, but that doesn't hold true for everyone. We work hard to provide for our families. I work with Baby Boomers and some are still working hard today.

The era of the Baby boomers changed the world, we ended a war, creating a new culture of values, and we won the right to vote. I realize that some values like free love and the drug scene was to me something that I would never adapt myself, but that was my choice.

We are the most productive group of people in the US. Sure we have had our mistakes but what generation is perfect? We are the ones that set the stage for the high tech era. Many of us have worked hard to create a good life for our children to carry on the legacy. We are free thinkers. The Baby Boomers - WE Rock!

I was the owner and the moderator of a group that consists of 5000 members, called the Baby Boomer Believers. It was a group that I decided to start a few years back to get other Baby Boomers involved in various Christian based topics.

There was a lot of sharing, topics and games to play, kind of like the forums that squidoo has. I was really committed to that group.

We even had a couple meet on the chat box that were put into the group and were kind of still new to us, because having a chat box was not an everyday thing like it is now. So it was a big deal back then.

This couple married and have been married until this day. They met in my group and they lived very far from one another. I created this group to bring us Baby Boomers together again, I never realized that it would bring two people together in Holy Matrimony, it was well worth the effort. To still see them happy today makes me overjoyed inside, that even in an online group two people can find each other.

There was a lot of interaction within this group. I had to come up with new ideas all the time to keep them interested and coming back. This is one of the things I would do. I selected five Baby Boomer members every month with the links to their pictures and personal sites, and posted it above the group interactions, having the group members ask anything, which each member agreed too. It would post on their own individual thread and it made them feel special and want to come back.

This is one of the ways that the Boomers stayed interacting. I then had a need of a helper who helped me moderate the group, it had to be a trusted Baby Boomer because this person would have to be in my most personal stuff since I am the one that created the group in the first place. We also went as far as giving gifts that would go to them personally, we made it a way that we didn't have to have their personal information out of respect for their privacy.

I loved my Baby Boomer group I miss some of the Boomers which I established friendships with over the years but somehow like most things in life, we lost touch. I still have a few on my facebook, and we have kept in touch that way. But these Baby Boomers were a riot, they entertained me more then I entertained them.

I met a lot of different Baby Boomers from all walks of life, I had a pastor send me a Bible which meant a lot to me. I came to learn of other Baby Boomers from afar through this group, and many were very respectable people in their field. People with feelings that didn't portray a selfish attitude whatsoever.

The Baby Boomers leave a legacy, we are the most dedicated people of this generation, we are true examples. At least the many that I have come across throughout the years tend to be.

The picture was made for the group by one of the Baby Boomers, these were just some of the active members, a great circle of fun people, 'The Baby Boomer Generations'. I bet you can't guess which one I am, joking.

The Generations Of The Baby Boomers

Here's Just a "Sneak-Peak" At What You'll Uncover With The "Ultimate Baby Boomers Guide":

* Having a proper diet

* Things you can do to Avoid Alzheimer's...

* Ways to manage your money

* Keeping sugar out of your diet

* How to improve the functioning of your heart...

* Staying strong so you can actually play with your grand kids...

* Discover what supplements to take to maximize positive effects...

* How to manage stress as a baby boomer...

* Plus much MUCH More! 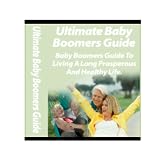 In this picture that is me when I first started getting involved on the computer. At this particular time I was a full time mother and housewife so being on the computer and interacting with others made my solitary life of being a stay at home mom and housewife more fulfilling.

This is me when I created the Baby Boomer group as you can see in the background were many of my VHS tapes which were a lot of exercise tapes, that I was into a lot and still try to be now, but I am not as consistent as I use to be. Because I am to busy typing on squidoo lol just kidding or am I :)

In one of my pop culture lenses I showed you the different types of music that we listened to in the 70's but I never spoke about one of the hottest guys there was in that time. At least to me he was hot ha ha and that was John Travolta do you remember him in Saturday Night Fever? oooo baby he was so fine lol. I always thought that they could of picked someone better for him in that movie but again that was me being partial I suppose or maybe jealous hmmmm? NOT... I never went to that extreme, over an actor.

I was married at the time when he was popular, I remember going to a theater with my sister in laws with John Travolta being the main actor. You should of seen these married women carry on, I was a little annoyed by it but then again if you knew them then you would understand. There were some guys sitting behind us complaining about what we saw in him. Could it be his eyes or his dimple in his chin or maybe the way he talked who knows we were young and our hormones were very active need I say more.

The time of the Baby Boomers there are so many actors that are Baby Boomers that were very gifted and talented people. In fact I see them more and more still putting their talents to work in the movie industry

We Baby Boomers refuse to let ourselves go we strive to stay active and we are always eager to make a difference.

These are just a few good movies that John Travolta played in. He is so talented and I am proud to call him a Baby Boomer :)

Saturday Night Fever (30th Anniversary Special Collector's Edition)
After this movie is when disco ruled the dance floors. He was hot and he had the moves to go along with his looks. This is one movie that I am absolutely sure that every Baby Boomer watched
Buy Now

Which movie was more famous that was played by John Travolta?

Grease
LOL I remember this movie to well. I usually don't care for musicals but this one was an exception. It is about a gangster looking kind of guy getting together with a wall flower so to speak but boy does that change in the end. They made a nice match in this movie. It shows how silly a teen can be or look within this time and how we can get our self into something but how in the end it works out for every one. They all graduate then the two go up in the sky with their car which was silly but to the viewer it only meant that life can get better.
Buy Now

Played by John Travolta was played in....

Broken Arrow (1996)
I have to admit these two really play well together it is a great movie to watch it does hold your attention with a lot of action..
Buy Now

What do you have to say about the baby boomer generation

A Generation of Sociopaths: How the Baby Boomers Betrayed America
Buy Now

Hey dude or dudette can you post a comment and let me know that you have been here :) - Farout thank you!