The Missouri River: Facts and History

The Missouri River history spans millions of years. The Missouri River is North America's longest river with a length of 2,540 miles. It is central United States' major waterway. The river was formed about twenty million years ago during the latter part of the Tertiary Period. The river flows into the Mississippi at the rate of approximately 76,300 cu. ft. per second. The Missouri River originates from southwestern Montana at Three Forks the confluence point of Madison, Gallatin and Jefferson rivers. Hell Roaring Creek, the Jefferson River's tributary, is the primary source and the Madison River forms the secondary source for the Missouri.

The credit of discovering the river goes to Louis Jolliet and Jacques Marquette, French explorers, as they crossed the mouth of the river in 1673. Later, during early 1700s, Sieur de La Verendrye along with his sons, Pierre Gaultier de Verennes, Villasur, the Mallet Brothers and others, Spanish and Frech explorers, penetrated the basin's lower part. However, a full account of the exploration was available only during 1804-06 following the expedition of Lewis and Clark.

The Missouri River as Transportation

Missouri and tributaries have been a source of transportation and sustenance for more than 12000 years to the major groups of Native Americans who populated the watershed. The natives led a nomadic life and depended on herds of buffalos that roamed the plains once. They populated the Missouri basin in between the Mississippi River and Eastern Montana. The major tribes that occupied the area near the headwaters in Montana include Shoshone, the Wind River and the Atsina. In the latter part of the seventeenth century, the Europeans came to the river basin. Finally, the United States acquired the basin in 1803 through Louisiana Purchase after it passed through the hands of the French and Spanish.

The Missouri was the main route for the United State's westward expansion. Some of the settlers who came to Missouri after the Louisiana Purchase remained there, but others continued to move westward. Fur trade grew in early 1800s and American Pioneers headed west in the 1830s. They moved in covered wagons at first and then by steam boats that were introduced into service in 1819. Settlers took over the watershed lands from the Native Americans and that led to some of the violent wars in the history of America. Railroads came into existence after the Civil War in the latter half of the nineteenth century.

In the twentieth century, the Missouri was developed for flood control, irrigation and hydroelectric power generation. It is one of the major agricultural regions in America. The western part is known for wheat cultivation, cattle and sheep. In the eastern area, corn and soybeans are cultivated. The eastern area is also famous for cattle and hogs. There are about 15 dams in the river's main stem. In the tributaries, hundreds of dams have been built. However, cutting of meanders to channelize the river for irrigation has reduced the Missouri river's length by about 200 miles to 2341 miles. Though the region is populated and has developed industrially as well as agriculturally, the water quality, wildlife and fish population in the ecosystem have been seriously impacted.

Support Struts Inside Section of Pipe Used to Divert the Flow of the Missouri River, Fort Peck Dam

Where is the Missouri River?

The river that encompasses an area of 529,350 sq. miles drains about 16% of North America. The Missouri River's headwater is at the Rocky Mountain's confluence of Madison, Gallatin and Jefferson Rivers and drains into the Mississippi at St. Louis in Missouri. The river basin is home to as many as 10 million people belonging to about 28 native tribes of America, ten states and also a small portion of Canada. The ten North American states are Iowa, Minnesota, Kansas, Missouri, Nebraska, Montana, North Dakota, Wyoming, South Dakota and Colorado. Some of the cities through which the river flows are Great Falls, Bismarck, Pierre, Sioux City, Omaha, Kansas City and St. Louis.

The Missouri River is a shallow and slow moving river, except in the Rockies, and varies greatly in its flow. Water level is low in winter when the surface water mostly remains frozen. The river swells up during the period from March through June because of spring rains and melting of snow. A number of other rivers from the west to east drain into the Missouri forming its tributaries. They include the Musselshell, Marias, Milk, Little Missouri, Yellowstone, Cheyenne, James, Niobrara, Big Sioux, Kansas, Chariton, Platte and Osage.

The basin of Missouri has historically supported a wide range of animal and plant species. Currently, the zone consists of primarily cottonwoods, sycamores, willows and trees such as ash and maple. The heights of trees are more in areas away from the basin because of soil erosion that happens during floods. The Missouri river does not support most of the aquatic invertebrates due to sediment concentrations. However, the basin is home to about 150 species of fish and 300 species of birds. The habitat also supports mammals such as river otters, minks, raccoons, muskrats and beavers.

What the River Carries: Encounters with the Mississippi, Missouri, and Platte

What the River Carries: Encounters with the Mississippi, Missouri, and Platte
Buy Now

There are six major reservoirs in Missouri's main stem, covering 1,500 sq. miles. These open waters provide scope for recreation. The Lewis and Clark National Historic Trail covers 3,700 miles and retraces the expedition of Lewis and Clark. The trail extends from Wood River, Illinois, to Astoria, Oregon, east to west, and goes through 11 states of the US and about 100 historic sites. There are number of boating tour operators who conduct daily tours: one-hour daytime, 1.5 hours evening time and sunset cruises, etc.

For a long period it was believed that the Missouri belonged to the Northwest Passage, the Atlantic to Pacific Water route. However, the expedition of Lewis and Clark confirmed that the mythical pathway was just a legend.Eight miles to the north of Decatur in Nebraska there is a hill that overlooks the Missouri River on the Omaha Indian Reservation. On top of the hill, a mound of dirt that is 45 feet high can be seen. It is believed that the great Omaha Indian Chief Blackbird was buried there sitting on his favorite horse.Flood myths are widespread and according to a story from the Lakota Indians, Unktehi, a monstrous water snake filled the river from one end to the other. They believed that the snake could puff up its body and make the Missouri River overflow.

A River Runs Through It
Buy Now

If you haven't watched this wonderful show from The History Channel, take a look at how the Missouri has shaped several states, or has it? Great series, and this episode directly talks about the states along the Missouri.

The latest flooding of the Missouri was in 2011. It was due to record breaking snowfall in Rocky Mountains of Wyoming and Montana and spring rain fall in the eastern and central Montana. Six major dams along the river had to release water to avoid overflow. This caused flood threat to many towns and cities from Montana to Missouri. 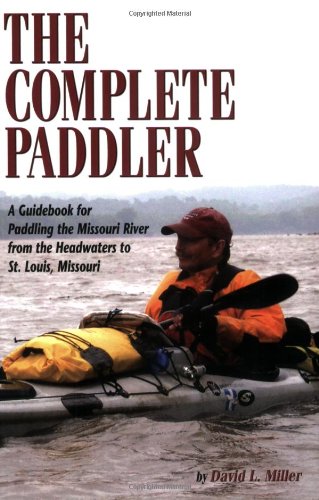 The Complete Paddler: A Guidebook for Paddling the Missouri River from the Headwaters to St. Louis, Missouri
Buy Now

Summer Visits to the Missouri

Summer time is a great time to visit the Missouri. You can rough it or stay nearby in a hotel. There are loads of activities along the river for any type of traveler.

Have you ever traveled along the Missouri River?