How to Make a Three Square Unfolding Book

How to Make an "Exploding" Minibook

This is a tiny book that opens up BIG. In fact, it's so big that some people call it an explosion book or a squash book!

Okay, I'm not going to lie. This minibook is a bit difficult to make because it involves some origami folds. BUT it's really cool! You take three squares of the same size, any size will do, and end up with a book that when closed is only one fourth of the size of one of the squares. That's a tiny book with lots of room for writing.

Fill the three square unfolding book with pictures or text; it's totally up to you. Use this minibook in a lapbook, or let it stand alone as a one day project. Make some blank books and hand them to your child on a long car trip. He will love the action of the pages!

You need three squares of the same size. And each one is to be folded in the same way. This fold is called the preliminary base in origami. So, let's tackle that base first.

You fold your square in half and then in half again from the other direction.

Open the square. Then turn your paper over so that the previous folds are now mountain folds. Then fold the square diagonally one time.

This is what your paper now looks like -- a horizontal fold, a vertical fold, and one diagonal fold.So the folds now divide your paper into two small squares and four triangles.

Next comes the tricky part. You are doing to place the two squares on top of each other and tuck the triangles into the center between them. I've drawn red stars on the corners that need to meet.

So, to check your base, when you open the corner, this is what you see--two pointy tips.

And under that, another square.

Help with the Base

Not quite there yet? Watch this video. It's painfully slow, but forward to your trouble spot and it's sure to help you see the process.

Putting the Bases Together

After you've created three of the bases, you're ready to affix them together to make the entire minibook.

Although I usually use cardstock for all of our minibooks, I find that 80-100 g paper is great for this project (that is, thinner than cardstock). Because of all the folds, cardstock is too bulky.

Unfold the squares and notice the diagonal fold. Of course, the folds are the same for each square, but depending on how you hold the paper, the fold can be sticking up -- a mountain fold-- or the fold can be poking down -- a valley fold.

This is how you line them up. Place one square with the (diagonal) valley fold up in the center of your work area.

Then put the other two squares, mountain fold up on top of the first square, overlapping as shown in the photo below.

Glue the overlapping squares, matching them very precisely for the best opening and closing action.

Grasp the far most upper corner and bring it down, folding the squares just as the individual bases were folded before.

You're done! Now go fill it up with fun pictures and writing.

For a tutorial video about how to make this book, visit Science Notebooking, a blog written by an elementary public school teacher who uses minibooks in her students' science notebooks. 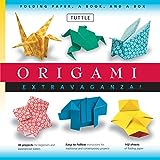 Have you ever made a flag book?

An exploding book about how sound travels.

Use ribbon to tie the book closed.

The book can open up, down, or even sideways. Try different orientations.

Use four squares instead of three for an even thicker book.