Victor Cousin (1792-1867), French philosopher and author, who constructed a philosophy that he called "eclecticism" and was a major influence on French education. He was born in Paris on November 28, 1792, and was a student at the ficole Normale of the University of Paris, where he later taught. His vast erudition as a philosopher, coupled with his oratorical gifts, made him one of the most renowned lecturers at the university. He introduced to France the work of the German idealists, especially Hegel and Schelling, both of whom he had met.

Under the liberal July Monarchy, Cousin drafted the education bill of 1833, which centralized the primary school system, and he served as director of the ficole Normale and in 1840 as minister of public instruction. He also became a member of the Academic Francaise (1830) and a peer. After the Revolution of 1848 he was forced to renounce both politics and teaching and devoted himself to studies in 17th century French history. He died in Cannes on Jan. 13, 1867. 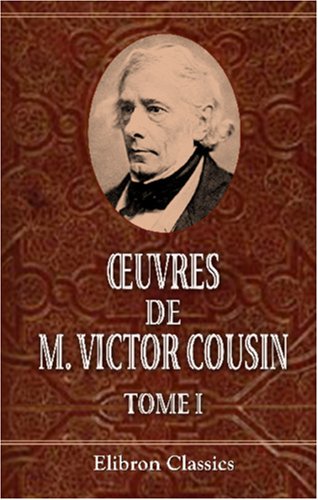 For his philosophy of "eclecticism", Cousin borrowed what he considered the best elements from a variety of thinkers, including the mystical Plotinus, the rationalist Descartes, the sensationalists Locke and Condillac, the psychologist Maine de Biran, the common-sense Scottish school, and the idealists Plato, Kant, Hegel, and Schelling. The result is an assemblage of heterogeneous and incompatible ideas, which resists classification and lacks rigor but abounds in variety and enthusiasm.

Cousin reduced all philosophies to four kinds- sensationalism, idealism, skepticism, and mysticism, which he believed succeed one another eternally as aspects of one Truth. He attempted unsuccessfully to unify his system by basing it on a psychological analysis of consciousness into sensation, will, and reason, all created by God. The doctrines that are in some measure Cousin's own include (1) the ability of the reasoning conscience directly to perceive the Absolute and (2) the inseparability of religion and philosophy. He wrote Cours de I'histoire de la philosophic (1829) and Du vrai, du beau, et du bien (1836).