My interest in this subject stems from my genealogy research, specifically in relation to my great-great grandfather (George Burgess) who spent his youth in America and kept his own scrapbook which gives an insight into his political views.

In this article I’ve included a number of 19th century newspaper stories from the scrapbook of George Burgess (1829-1905) which gives a brief glimpse of British and America politics and political history during the Victorian period. The newspaper publications included here are:

I’ve also included a section at the end on the American civil war because not only did my great-great grandfather live in the more southern States in America for a number of years just prior to the civil war but also the husband of his closest friend (The Middleton family from Washington, whom he stayed in close contact with after returning to England) served as a Captain in the Union Army during that civil war.

My great-great-grandfather, George Burgess (1829-1905) during his youth spent over 12 years in America from the age of 15 until his last trip back to England in 1857 when he bought back with him his collection of early American newspaper cuttings which became the start of his most enlightening scrapbook.

For Further Reading I’ve included the link (near the end of this article) to his scrapbook of over 500 Victorian era newspaper articles.

The Victorian era was the height of the British Empire; not something British people are proud of these days, but its history.

My great-great aunt’s grandfather-in-law (Thomas Arthur VC) volunteered to fight in the Crimean War (1853-1856), and was one of the first people to be awarded the VC (Victoria Cross) for his bravery. The Victoria Cross is the highest award in Britain for gallantry in the face of the enemy; the metal from one of the Russian canons captured in the Crimean War being used to make the medals.

After the Crimean War Thomas Arthur (born in Abbotsham, Devon, England) c1835 continued his military duty in India, taking his family with him; and while out there had several more children. The strangest thing (which I’ve never been able to fathom) is that while in India both he and his wife changed their names. Arthur Thomas became Arthur McThomas, and his wife changed her first name to Britannia.

Below are sample Victorian era newspaper publications (from my great-great grandfather’s scrapbook) that give a glimpse at what was being printed at the time in America and Britain about politics and political history.

The Politics of Gender in Victorian Britain: Masculinity, Political Culture and the Struggle for Women's Rights
If you’re keen to learn more about the political culture of the time and how it was influencing and being influenced by society and individuals then this book in Hardcover and Kindle Edition highlights the struggle for women’s rights in Victorian Britain.
Buy Now

As Featured in British and American 19th Century Newspapers

The cost of Royalty in Britain featured greatly in both British and American newspapers during the Victorian Era.

Below are just a couple of extracts of parts of two articles, one published in an American newspaper and the other a British newspaper. These, rather lengthy and therefore informative, articles can be read in full on my Nathanville genealogy website.

Quoting From the American Newspaper:-

The statute which granted $2,000,000 per annum to the Queen, with $50,000 per annum additional "for home secret service," provided for the particular application of the money as follows:-

Franklin and the Barber

If you have difficulty in reading it here a full transcript is available for free viewing on my Nathanville genealogy website.

Use this link further reading of over 500 Victorian Newspaper articles available to read free online. Impact on Modern Politics and Society

The biggest major event in 19th century America is almost certainly the civil war over slavery splitting north and south; and undoubtedly this and its outcome has shaped America politically and socially; making it what it is today.

My one connection with this historic political event is the Middleton family from Washington, the husband serving in the Union Army during the civil war. My great-great grandfather (George Burgess) met the Middleton family prior to the civil war when he was in America finishing his apprenticeship in stone cutting (stonemasonry). He initially went to Baltimore, Maryland (a Slave State) in America to continue his apprenticeship, finishing it in Philadelphia, a Free State bordering Maryland. I’m not exactly sure where or when he met the Middleton family but he returned home to England in 1857 and thereafter kept in close contact with them, often writing to the wife, Maggie Middleton, and exchanging photos.

The photo below is Richard Middleton Captain in Union Army (American civil war) 50th Regiment of New York Eng, this photo was sent to my great great grandfather by his dear friend in America, Mrs C M Middleton, the wife of Richard.

Map of Baltimore, Maryland and Philadelphia 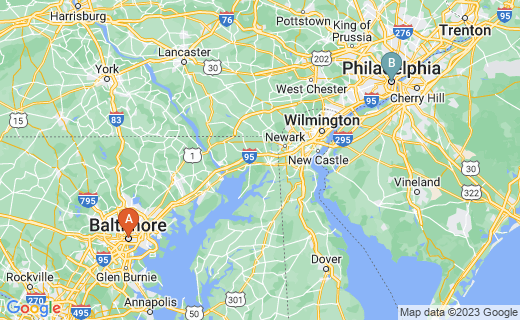 Baltimore, Maryland, where George Burgess came from England to continue his apprenticeship in stone cutting

Philadelphia, where George Burgess finished his apprenticeship in stone cutting

You may have noticed the common use of colloquial language in some early 19th century American newspapers, do you think this use of colloquialism enhances the reading experience or hinders it.

Does colloquialism in newspaper stories enhances the reading experience or hinders it?