The Age of Enlightenment and Humour

Whether you are religious or not you have to admire the Victorians for their energies devoted to re-evaluating their beliefs. In previous generations the church was the centre of the community and it was taken for granted that children would be christened or baptised and that couples would have a church wedding.

With the dawning of the Victorian era people began to question their religious beliefs as much as they questioned everything else. It's not to say everyone ceased to be religious, although some did, but rather people began to base their faith on reasoning rather than just blind faith.

It should be stressed that this didn't suddenly happen in the 19th century, many dissenting Christian groups sprang up in England in the late 1640s following the English Civil War; it's just that as with everything else the process was accelerated in the Victorian era. 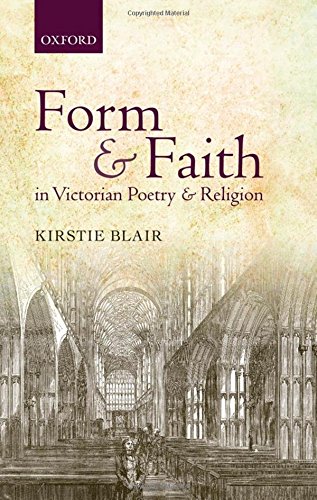 Form and Faith in Victorian Poetry and Religion
Hardcover book that examines Victorian poetry in relation to Victorian religion, particularly in relation to the bitter debates of the times over the differing use of forms of worship, and the significant contributions these poems may have made to those debates.
Buy Now

This article gives a light-hearted snapshot of religious views and values as often portrayed in British and American newspapers in the 19th century; frequently by republishing humorous religious story’s previously published in other newspaper as fillers, a common technique at that time for filling spare space on the page.

The source of these (often humorous) religious articles showcased in this article is from the Victorian scrapbook of George Burgess, born in 1829. George Burgess was religious, but he also had a good sense of humour, and it is thanks to him compiling a scrapbook of over 500 newspaper articles reflecting his views, humour and taste, that I have been able to get a good insight into Victorian values and pass some of this material on in this article.

So below, as well as snippets of 19th century religious themed newspaper articles I’ve also included a brief section on George Burgess and his religious leaning; along with a link to my genealogy website where I’ve transcribed his religious written thoughts in full.

My great-great-grandfather, George Burgess (1829-1905) was religious; he thought about his beliefs deeply before writing his religious thoughts down in several volumes. In his writings he stressed that the bible could not be taken literally, he also went on to explain in great detail why he believed the messiah could not have been a virgin birth and why he couldn't have risen from the dead three days after his death.

George Burgess was a form of spiritualist by faith, believing in the spirit in everything; not just the human spirit but a spirit that went through everything (organic and inorganic) and connected everything e.g. the spirit in the seed that makes the seed grow and blossom into a tree. It sounds a bit like Buddhism to me, or even a little akin to the energy force in quantum! But nevertheless his profession of Phrenology is based on the scriptures; although I'm not quite sure what the connection is? His religious writings along with the Victorian era newspapers referred to in this article are all freely available for viewing on Nathanville, link to website below.

Religion in Nineteenth Century America (Religion in American Life)
From the perspective of the various religious sects in 19th century America, this hardcover book traces their foundation and development from the 1780s which in the aftermath of the American Revolution gave rise to the separation of church and state and the freedom for people to follow any religion.
Buy Now

Published in British and American Newspapers

The third Victorian newspaper article is just humorous and no doubt was also used as 'filler' e.g. to fill the space on the page.

Further information on these and other Victorian era newspaper articles can be found on my Nathanville genealogy website.

Paul Denton and the Famous Barbeque

Paul Denton, A Methodist preacher in Texas, once advertised a barbecue, with better liquor than usually furnished. When the people were assembled, a fellow in the crowd cried out, "Mr Paul Denton, your reverence has lied. You promised us not only good barbecue, but better liquor. Where is the liquor?" "There!" answered the missionary, in the tones of thunder, and pointed his finger at the matchless double spring, gushing upon two strong columns, with a sound like a shout of joy from the bosom of the earth. "There!" he repeated, "there is the liquor which God, the Eternal, brews for all His children!

Paul Denton was a fictionalized account based on the life of John B Denton, a pioneer preacher who went to Texas in 1837, became a lawyer and in 1841 engaged in fighting Indians; but unfortunately for him he was the only Texan killed in the battle.

The story of Paul Denton and the Barbeque was used in newspapers all around the world as filler from the 1850s to the 1880s.

This story (A Singular Sermon), first published in 1750 was republished in a British newspaper in the 1890s (as a filler story) with the following introduction:-

The following singular sermon, which has recently been reprinted in a tract at Diss, in Norfolk, is said to be authentic. This title is "A Sermon occasioned by the Death of Mr. Proctor, Minister of Gissing, by the Rev, Mr. Moore, of Burston, in Norfolk." It is surmised to have been preached about one hundred and forty years ago, in the parish church of Burston, a small village near Diss. Most of the names mentioned in this curious - but considering the times and manners of the locality, rather characteristic - discourse, are now standing in the register books of the said parish, thus so far supporting the reality of the sermon. In 1750 it was printed in the British Magazine for November, and a manuscript copy of it was found in an old wall, pulled down at Wisbeach, in 1823. We thus introduce it, and we give the discourse entire, which we are able to do without trespassing much on our own space, as it has, at least, the merit of brevity: -

British Humour and No Doubt Another 'Filler' Story Nothing to do With Religion

You've seen from these Victorian era newspaper articles that the Victorians, although they may have taken religion serious were lighthearted about it and had plenty of room in there publications to add a good stock of 'filler' stories to their pages.

Do you find these newspaper fillers enlightening or just a waste of space?

Your Views - Have Any Views?