Birds sitting on power lines are one of the mundane everyday scenes often taken for granted, yet one that brings endless fascination. When I see rows of birds on power lines, I often stare in wonderment. Why do birds like to perch on power lines? Why don't birds get shocked? Or do they? Why do they sit spaced evenly in a row? Why do they face the same direction?

Power lines are common and convenient rest stops for birds in cities and towns where there are very few trees. High-tension wires make great lookout perches for passerine birds or the common perching birds, like sparrows, starlings, crows, grackles, to name a few. The feet of perching birds or songbirds are adapted to grabbing onto branches and power lines. Not all birds have this special adaptation.

Birds are social animals and like to interact with each other as they roost on power lines. Being up high gives the birds a good vantage point to see the surroundings and be on the lookout for predators and food sources.

This looks like a sold-out concert. When most of the seats are taken, birds will try to accommodate each other in a shorter power line.

Who called this high-voltage meeting?

Birds can be seen at dusk or sunrise perched on overhead power lines. Every time a bird lands on the wire, the entire row of birds on the same wire would move over for the newcomer. Birds are instinctively such considerate and accommodating little creatures.

This high-voltage convention appears to be an enormous flock of birds in the midst of migration, taking a short rest on power lines before heading on to their destination.These are nocturnal migrants because they are birds that migrate at night.

BIRDS ON A WIRE
Buy Now

(hirundo Rustica) Perched on a Wire

The feet of birds are adapted for perching

The average bird foot has four independent flexible toes and typically the first big toe (the hallux) is turned backward, while the other three toes fanned forward. This condition is called anisodactyl. Most song birds and perching birds, like sparrows, thrushes, wrens, warblers and others are anisodactyl. When perching birds sit, a tendon on the backside of the ankle automatically flexes locking their toes around the branch. With feet locked, sleeping birds don't fall. As the bird stands up and straightens its legs, the tendon releases its lock. This adaptation also enable birds to perch on power lines

More about the bird's feet

These bird formations on intersecting powerlines almost seemed staged and choreographed. Who would ever think that these little creatures would roost at every angle. Being bird-brained is not necessarily a bad thing. Birds are smarter than most people think.

A show of bird power - Birds at every angle on pylons

Birds rest along the cross arms of an electrical transmission tower, colloquially termed an electricity pylon in the United Kingdom and parts of Europe. This is a slanted look at birds at different angles. It is no wonder birds are an endless source of fascination of photographers and birdwatchers.

Why do birds sit evenly spaced on power lines?

Why do they face the same direction?

Birds that sit on power lines almost always face the direction of oncoming wind. Birds have an easier time taking off and landing facing the wind.

This row of starlings on a power line appear to be gossiping about the day's events.

Pigeons are medium-sized birds compared to smaller birds like wrens or ketrels and will instinctively leave more space between themselves.

Three's company. These three birds are leaving zero space between themselves to keep warm on the power line. It must have been a momentary stopover to where they were headed in the winter.

Why don't birds get shocked sitting on power lines?

Simple illustration of the nature of electricity - When does electrical shock occur?

Why perching birds do not get electrocuted - And others birds do

Do you ever take notice of large flocks of birds on power lines?

Large birds are at risk for electrocution

Due to wide wingspan and collisions

Thousands of raptors (birds of prey) are killed every year due to power lines, particularly in the western U.S. In wide-open plains and deserts, power poles are often the only high perches available for hunters like Bald and Golden eagles and Great Horned owls, who survey the landscape for prey and take off into rising wind currents. Electrocution occurs when their wings brush against a two live wires when settling on top of a grounded pole.

The California condor is the largest flying bird in North America with a wingspan of 9 feet which soar in deserts and open-wide areas of the Western United States. Its population has dwindled due to loss of habitat, poaching, slow rate of reproduction and collisions with power poles. This is a one-year old condor that fell victim to electrocution.

Dove gets electrocuted on powerwire 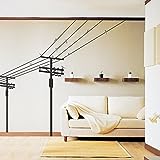 So easy to move, remove, reposition. Change the mood of your room, office, kids' rooms in a flash.

Enjoying Bird Behavior Through the Seasons

Why Birds Do That:

I would love to hear from you before you fly off