Why You Suck at Math

Do you REALLY suck at math?

Or do you just hate the way math is taught in schools?

Most people who think they are bad at math have simply been damaged by the school system.

Schools teach math as a "subject" that they use to club you into submission with, using tests.

Mathematics, on the other hand, is an elegant world full of romance and art, patterns and insights, which is driven by a combination of imagination and utility.

Does that sound like what you learned about in school? I'll bet not!

Some thoughts about why schools suck at teaching math

Today I read a blurb that said there are studies that show that grades in math start dropping in middle school.

I think that is a case of bullshit statistics. ("Never trust any statistics that you haven't falsified yourself."- Old German saying)

The grades may drop, but that is only because the methods of grading are different.

It is really hard to grade in elementary schools. They are under intense pressure to "get kids through the door" in order to suck up to the "No Child Left Behind" act. It's easy for a teacher or administrator to close their eyes and hope for the best, when all a child is expected to do is maybe be able to add and do simple multiplication to pass a test.

You see how easy it is for teachers to fool themselves? And can you blame them with all the pressure they are under? (Well, yeah, you can, actually.)

I have had lots of teachers tell me how good their students are at math, only to have them not be able to tell me what 7 times 8 is. Or even what 7 plus is 8. It's pathetic.

In middle school, though, when teachers try to teach these kids algebra, or even long division, the teachers freak out at how little the pupils had learned in the younger grades. The grades drop, only because they'd been so inflated before.

Teacher: "Johnny, what is the ratio of the sides of a right triangle to the hypotenuse?"

Johnny: "How the (expletive deleted) should I know, man?"

See how it's a little harder to give Johnny a break on this one?

I think this kind of phenomenon explains more about the "drop" in grades in middle school than actual math ability.

Finally, the truth can be told! And by whom better than an cool actress and mathematician, Danica McKellar?

Actress Danica McKellar is probably best known for playing the part of Winnie, "the girlfriend" on "The Wonder Years" in the eighties. It was a brilliant show, and now she has written what promises to be a brilliant book. With the subtitle, "How to Survive Middle-School Math Without Losing Your Mind or Breaking a Nail," Ms. McKellar offers help and advice that most girls need. Most boys need it as well, but she is targeting her group well, because, well ... duh.

Math shouldn't have to be a gender issue, but unfortunately society has generally.

For much more info, check out my lens at Math Doesn't Suck

There is also an interesting post on the God Plays Dice blog. 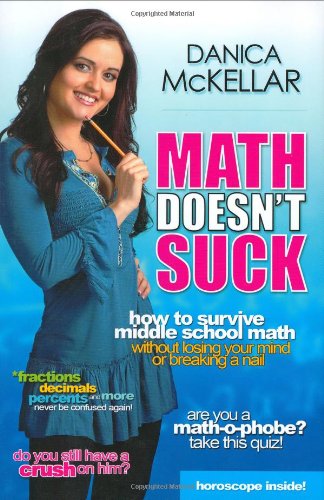 Math Doesn't Suck: How to Survive Middle-School Math Without Losing Your Mind or Breaking a Nail
Buy Now

Great YouTube vid about the No Child Left Unstressed Act (NCLB) - This Law was made by morons. How can anyone trust morons to make education policy?

Did you suck at math at one time, and them improved? Tell us how you did it. Do you have any helpful hints for others? Let us know!

Do you have any problems that you just can't seem to get over concerning your feelings about math? Let us help you!

(Unfortunately, I mistakenly deleted the previous guestbook. My apologies to all who commented. Please try again .)

Got a story? - Tell us about your experiences with math, good or bad.