10 Albums You Need To Hear #5: The Price of Progression by The Toll

When The Toll released The Price of Progression in 1988, I was still a relative newcomer to being a serious music fan and it caught me a little off guard. The only thing I heard at that time that seemed even remotely similar was a band called The Unforgiven (who we will get to a little later in this series). From the first notes, it was clear The Toll were a great band, but the real thrill came when the vocalist, Brad Circone, really began to work his magic.

The first song was "Jazz Clone Clown" and it was more or less a straight ahead rocker -- not too hard or heavy but certainly not typical pop music. It was just rock music, nothing more or less. I started thinking I had found another Bad Company, another Foghat, or another Unforgiven. It was that similarity to The Unforgiven that really piqued my interest as they were one of the most uniquely interesting bands I was familiar with at the time.

But the next song, "Jonathan Toledo", really showed that The Toll had a uniqueness all their own. The song was going along as expected after the rockin' tempo of "Jazz Clone Clown" but was an even better tune. Then all of a sudden Brad Circone goes into this story about a visit to the Reservation and his interactions with the Native Americans there. It was at once powerful, thought provoking and completely different from anything I had ever heard. from that moment forward, I was hooked.

The next three songs were all excellent tunes. "Smoke Another Cigarette" was moody and atmospheric without sacrificing any chops. "Soldier's Room" was a bit more pop oriented but still a good, solid rocker. And "Word of Honor" was another standout track with a catchy chorus and thought provoking lyrics. But I started missing that something special that "Jonathan Toledo" had offered. And then I heard "Anna-41-Box".

"Anna-41-Box" tells the story of an abused woman named Anna, the degradation she endures, and the revenge she plans for the man who holds her captive. Without a doubt it is the most compelling track on the album. The first time you hear it, it gives you that feeling that you get when you see a truly great suspense film. You cannot help but feel your nerves tense when Anna screams to herself, "He knows that I'm awake! He knows that I'm awake!" It is truly a gut wrenching song.

This is followed up by the much less stressful "Tamara Told Me", another song with pop leanings that still has a meaty rock feel. It is really kind of a breather because the song following it, "Living in the Valley of Pain", is another narrative fueled burner that takes on organized religion, the Catholic Church in particular. I guess it would be hard to deny the song can seem a bit preachy (or perhaps the better term would be "anti-preachy"), but there is no denying its power.

Just when you think nothing can top what you have heard already, you are treated to the ephemeral "Stand In Winter", featuring the legendary Mick Ronson on guitar. How a man who had played with the likes of David Bowie, Ian Hunter and Bob Dylan ended up on the debut album of a band from Ohio, I haven't a clue. I have heard rumors he was in the studio, heard the band and offered his services because he liked what he heard, but I have no idea if that is true. Whatever the reason, it made a great song even greater. 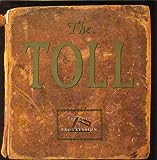 The Price of Progression
Buy Now

Geffen really dropped the ball with The Toll. Anyone who has heard the album will tell you that while "Jonathan Toledo" made a great video and is an incredible song, "Stand in Winter" should have been the lead off single. The Mick Ronson connection would have given the disc jockeys an added reason to play it and a talking point that would get some attention. Why they chose "Jonathan Toledo" remains a mystery.

This was a band that had landed the largest recording contract ever for Ohio band worth over $3 1/2 million. They were being dubbed "the next U2" and had incredible momentum having already played in more than twenty states. Their debut album was a powerhouse filled with what should have been instant classics as well as catchy hook-laden rockers that would have played well on MTV and rock radio.

There was plenty of praise to go around when the band hit the scene. For example, while reviewing the band's live performance in the March 7, 1989 edition, the Los Angeles Times said they were "clearly an arena rock band waiting to happen". Everyone, it seemed, was fully aware of the band;s potential, including Geffen Records. You just have to wonder, how could the hottest label in the world at the time manage to so fully screw it up?

When it came to an innovative, charismatic, and admittedly a slightly enraged frontman, the only band that could match or possibly top The Toll was Warrior Soul whose singer Kory Clarke made every show part performance art, part political activist gathering and part rock show. Those turned off by the political aspect of Warrior Soul's show may have found Brad Circone and The Toll more to their liking while some others may have wished to see more of the fiery bombast Kory Clarke was always ready to offer.

But that is not to say The Toll was totally without a political side or that Brad Circone was a picture of calm on stage. In April 1989, Rolling Stone described him as "a man who would have made Jim Morrison seem like a stable, unassuming frontman". They didn't necessarily mean that completely as a compliment, but it says something about the impression Brad would make. It was not unheard of for Brad to dive into the crowd from a balcony orstorm across the stage and just fall into the crowd.

But rather than simply ranting against the government, The Toll tended to more often create social commentary through Brad's lyrical narratives-- the treatment of Native Americans ("Jonathan Toledo"), the horrors of war ("A Soldier's Room"), spousal abuse ("Anna-41-Box")... In fact, the band began referring to their art form as "narrative rock". The fans as well as many of the critics ate it up. But Geffen had no idea how to market this band that seemed so determined to avoid the mainstream.

Each night on stage, the boys in the band would just follow along as Brad improvised tales of wonder and brought life to the characters in those stories. One night Anna might seek and find her revenge while the next night she might simply escape and leave the terror behind. No one knew, quite possibly not even Brad, exactly how the action would play out each night. That was part of what made a Toll show so exciting.

Offstage, however, Geffen was floundering, unsure of how to proceed with the band. When some changes in personnel were made in upper level management, the band lost what little support they had from at the label. Eventually, the band fell victim to Geffen's lack of commitment (yet another thing they have in common with Warrior Soul) and after releasing one great -though-far-from-briliant follow up album called Sticks and Stones and Broken Bones, the band disbanded.

Make no mistake though -- the real problem with the second record was the label's insistence the narrative aspects be toned down to make the band more mainstream in an attempt to get some hit singles. It still included some great songs like the spooky ghost story "Standing on the Ledge", the cry to arms "Hear Your Brother Calling" as well as the socially political commentary "American Mess" and should be added to the collection of any fan of rock music.

Brad Circone went on to establish a successful marketing career, eventually founding his own company. Bassist Greg Bartram became a noteworthy photographer in the Columbus, Ohio area. Rick Silk is now an attorney with the Ohio law firm Freund, Freeze & Arnold. And Brett Mayo is Director of Energy Management & Sustainability for the Office of Student Life at Ohio State University.

I believe the band has done at least one or two reunion shows, but unfortunately for the fans, it is doubtful the band will ever reform for any sort of long term project. A tour is almost certainly out of the question and a new album is probably unlikely. But hey, you never know... stranger things have happened!