I love a good Christmas carol just as much as the next person. It wouldn't be Christmas without songs like "Silent Night" and "We Three Kings." But now that I've got kids, I've also discovered the joy of listening to funny Christmas songs. Of course I was familiar with "Grandma Got Run Over by a Reindeer," but I never knew just how much funny Christmas music was out there until my kids started introducing me to new, silly songs. Here's my list of the 10 best funny Christmas songs for kids. 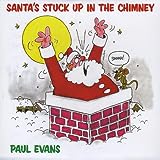 Santa's Stuck Up in the Chimney
Buy Now

The Best Funny Songs for Christmas

1. Santa's Stuck Up in the Chimney - This song by Paul Evans is my daughter's new favorite funny Christmas song. Poor Santa Claus goes on a diet, but when Mrs. Claus starts baking Christmas goodies, Old St. Nick starts packing on the pounds and gets stuck in a chimney. Everyone has to work together to "Push! Tug! Pull! Shove!" to get him free.

2. I Want a Hippopotamus for Christmas - This is the classic song recorded in 1953 by 10-year-old Gayla Peevey. The song shot up the charts and inspired a local promoter to start a campaign to give the little girl a real hippopotamus. Her hippo, a baby named Matilda, was donated to the Oklahoma City zoo and lived for nearly 50 years.

3. I Farted On Santa's Lap (Now Christmas is Gonna Stink for Me) - If you go to Amazon looking for this song, don't worry about the explicit lyrics warning on the version of this song recorded by the Little Stinkers. Unless you object to the word "fart," don't like the phrase "cut the cheese" or don't want to hear that "even old Saint Nick rips one now and then," you don't need to worry about this version of the song. What you need to watch out for is another version of the song recorded by Usher. THAT version has explicit lyrics. (Exactly WHY he needed to ruin a perfectly funny song for kids with explicit lyrics is beyond me....)

4. Reindeer Poop! - Here's another Christmas song featuring bathroom humor. If your kids enjoy making "reindeer poop" (Christmas candy with a silly poem) during the holidays, they'll love this song by Marmalade Sky about a man who travels to the North Pole and discovers that reindeer poop is a tasty treat.

5. Grandma Got Run Over by a Reindeer - No list of funny Christmas songs for kids (and adults!) would be complete without this one. Written by Randy Brooks, "Grandma Got Run Over by a Reindeer" was originally performed in 1979 by Elmo and Patsy and has since become a classic. There's also an animated special based on the song. The song kind of leads listeners to believe that Grandma met her demise under the reindeer's hooves, but the animated special has a happy ending that kids will enjoy.

6. The Chipmunk Song (Christmas Don't Be Late) - This is another oldie but goodie, Originally written and recorded in 1958 by Ross Bagdasarian, The Chipmunk Song won three Grammy Awars for Best Comedy Performance, Best Children's Recording, and Best Engineered Record (non-classical). When the 2007 Alvin and the Chipmunks movie was released, this song became a hit again. A remixed version that appeared on the movie soundtrack peaked at #66 on the Billboard charts.

7. Little Saint Nick - Kids will enjoy this song about "real famous cat all dressed up in red," but adults might get a kick out hearing a familiar tune with new lyrics. The Beach Boys recorded this song to the tune of their own 1963 hit, Little Deuce Coupe.

8. Jingle Cats Medley - The Jingle Cats Medley is just one of the many songs "sung" by cats on the "Meowy Christmas" album by the Jingle Cats. The Jingle Cats started quite by accident in 1991, when a kitten named "Cheesepuff" sneaked into a Hollywood studio recording booth and started meowing along with the song "Jingle Bells." The studio engineer decided to record the cat and adjust the music timing to "make the first cat singing in recorded history," according to Wikipedia. The cats 1993 album Meowy Christmas sold 100,000 copies in the first four weeks.

9. Didn't I Get This Last Year? - Kids who are always getting unwanted gifts from aunts, uncles and other family members will get a kick out of this song by Bob Rivers. The song, which appears on the "Twisted Christmas" CD includes poor little Tim lamenting, "Some socks, some socks and some tiny BVDs, But I can't get them up past my knees, Could you return them please, Aunt Louise?"

10. All I Want for Christmas is My Two Front Teeth - Here's another oldie that kids will still love, especially if they're missing a front tooth at the holidays. The story behind this song is also fun. A music teacher name Donald Yetter Gardner wrote it in 1948 after noticing that almost all of his second grade students were missing a front tooth. The song was picked up and published in 1948 after a music company employee heard Gardner sing it at a music teachers conference

What Are Your Favorite Funny Christmas Songs for Kids?