The Story of Noel Winters

New Brunswick, Canada. Part of The Maritimes, where many believe that nothing remotely dangerous could ever happen.

However, there is more to us than just Fiddle heads and Anne of Green Gables.

Some of Canada's most gruesome murders took place right here in The Maritimes, and as disturbing as these things were to us, they never seemed to make it out of Atlantic Canada.

Months later, a father and son who lived locally had come to visit Noel, and naturally, the three men got drinking together.

The drunker Noel got, the more his mind weighed on what was out in his backyard. He started to become paranoid that the men knew what he had done and were planning to turn him in.

Eventually, Noel snapped and ended up brutally murdering both men in the house.

After the two men were dead, Noel recruited both his girlfriend and friend to help him get rid of the bodies. They used a chainsaw to dismember the bodies and put the parts into garbage bags, all the while eating pizza like nothing ever happened.

Once all the pieces were in the bags, Noel and his friend transported the body parts in Noel's car to the local dump.

After Noel's arrest, the car ended up in the junk yard.

Despite what he'd later become, people described Noel as a polite and well-mannered kid, while others viewed him much differently. Noel was constantly in trouble.

By the time he entered Junior High he'd get into many violent fights. At one point, Noel and a friend stopped two bullies from picking on some kids. However, Noel gave the bullies such a brutal and violent beating and he enjoyed the feeling it gave him.

From that moment on, Noel developed this sense of macho tough guy attitude a quality that remained with him until the end.

The older Noel got, the more he'd drink alcohol and the more of his dark side would show. While drinking, Noel was known for random violent rages and out bursts. He'd trash anything around him while in these wild moods, and people who knew him, learned very quickly he was not someone to mess with.

This and the fact he enjoyed beating on people, lead Noel into a career circulating around Drugs. Where Noel made connections with the bikers gangs Oden's Wrath, and Hells Angels as well as a drug cartel located in Montreal.

You just didn't mess with Noel.

Matthew MacCaull did a convincing portrayal of the character of Noel. He showed both mannerisms and temperaments that Noel himself would have shown. I was amazed seeing him take on the role. One that must have been a challenging role to play.

A few days later, group kids stumbled across a couple of garbage bags containing dismembered body parts, at the local dump. Once they discovered what was in the bags they contacted authorities and the investigation began.

Even though it was only 1983, it didn't take the police long to trace the evidence back to Noel Winters.

Noel Winters eventually died by hanging in prison. Some believe it was a suicide, others believe prisoners hung him for what he'd done.

Writer & Director, Jason Bourque lived in Kingston Penisula, NB when he was a young boy. His next door neighbor was Noel Winters.

The event inspired the story of Black Fly.

As the story has it, Noel killed a friend, his friend's girlfriend and their dog.

That's when Noel's friend, killed the other friend for raping the girl.

Noel did not know the connection, until the friend bregged about what he'd done to Noel.

Noel snapped and killed him, killed his girlfriend for being in the wrong place, he even klled their dog.

Then he buried them in his back yard.

Bodies in the Backyard:

Published in 1993, ten years after the murders, Brian O'Niell tells the tale of Noel Winters. It is in this book filled with pictures, and gruesome details, surrounding the murders. 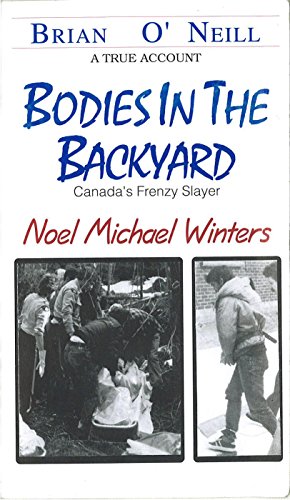 Bodies In The Backyard: Canada's Frenzy Slayer
A novel written by Brian O'Neill, that tells the in depth and gruesome story of Noel Michael Winters, the murders he committed and the investigation that followed. With eye witness accounts, and rare and gruesome photos, whether you live in Saint John or not, this book will give you nightmares. Back when I read this book, it gave ne chills and nightmare for weeks. Some of the images inside the book, are in color and disturbing. Even still, the book is a great read, filled with history and facts. You won't be disappointed with this book. Unfortunately their wasn't many copies made and it is extremely hrd to find these days.
Buy Now