what’s with this “ancient” group, LedZeppelin? Okay, stiff neck, this “band” began performing at the Millennium Dome in Dec. 2007. Zeppelin were an English rock band. The band was formed in 1968 and dissolved in 1980. Members were Robert Plant (vocals), Jimmy Page (lead guitar), John Paul Jones (bass), and John Bonham (drums).

48 years. About this long for me to pay-off my first new car. Or was that 48 months? I get confused when my mind is on the likes of “real” Rock Bands like Led Zeppelin, the “Masters and Those Credited” for forming Heavy Metal, oh how we remember this hazy years. Iron Maiden, Molly Hatchet, Slayer, Black Sabbath, and Metallica. Okay. I have given these guys and gals more credit that they deserve.

Fact is I am a died-in-the-wool, card-carrying Zeppelin Addict. From their trademark album that began their patented song, “Whole Lotta Love,” the long version, has helped more young folks to get drunk and dance their floors into sawdust than any song I know. As for me, I did not do any dancing, but since we are telling the the truth, I know what drunk means. I also know how to sit down between my then-massive stereo speakers, drop the needle and with that first riff, “Da-da-da-da-da,” even the most-ignorant people who were not old enough to fit into regular Rock Heads, they would smile and yell, “Whole Lotta Love.” Not me. I screamed-out the title alright, but I did not see the need in standing up. Still love Zeppelin II. 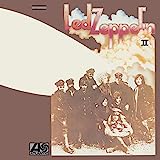 Led Zeppelin II (Remastered Original CD)
In 1969, on a cold, foggy Saturday afternoon, I entered my young man life by buying the Led Zeppelin II album. I still own it today 2019. No one will buy it because it will go to my grandson when I pass away. In short.This LP is one, if not, THE BEST by Led Zeppelin.
Buy Now

Ladies and gentlemen, ready with your buzzers? On Led Zeppelin's first album, imaginatively entitled "Led Zeppelin II", was released in 1969. The sleeve of the album featured a picture of which airship?

Any piker knows that it is The Hindenburg that blew up and burned in Trenton, N.J., in 1937, in still some amount of controversy.

Sure, That is the Buddy Rich.

One more? What do I hear, audience? Okay. One more.

Robert Plant had one wife and the mother of his children. Who was she?

Easy one, Wink! Her name is Maureen Wilson.

Okay, I am being a good host. One last Zeppelin question and we can call it a night.

What month and year did, in my seasoned-opinion, Led Zeppelin break-up?

Sadly, it was Dec. 4, 1980. Some music moguls still say that L.Z.’s break-up started more waves in other places than the Beatles. Approximately two months after the tragic death of drummer John Bonham, after a day of heavy drinking, retired for bed an died by asphyxiation from his own vomit. Bonham’s death was ruled accidental.

Music insiders said afterwards, that even when Zeppelin was on tour, Bonham was steal away from the band, groupies, and fans, and check into an off-the-beat-motel-room and drink like there was no tomorrow—and before his death, the other Zeppelin band members grew concerned about Bonham and his over-indulgence of alcohol.

I Sadly Remember The Very Moment

that my folks allowed me some space, and getting to buy Zeppelin’s first LP in 1969, the brown and white cover with the Hindenburg on the front, and when I first touched the jacket, my heart beat faster than I would have reacted if Starr (Last name withheld for personal reasons) had given-in and allowed me to take her to dinner. Honest. That’s all. Call me a liar if you like, but I remember in 1969, and ninth-grade, Zeppelin and the change from “kid” to “young man” all in one Saturday afternoon on a cold, foggy afternoon.

No one noticed. Not parents. And even not “Tramp,” my black and tan hound puppy. But during all of this silent glancing,”I” noticed. From the first few notes of “Whole Lotta Love,” I was hooked, not on dope, but the musical structuring, disciplines, and off-rhymes that made Zeppelin a hit.

To tell you just how much that I valued my cherished Led Zeppelin LP, as you know, teenagers everywhere, like to share whatever we lay our hands on, and I was no different. The first time I got on our phone, I was sharing about Zeppelin and their driving, hard rhythms so sharp that they could have bitten you if they were a mad dog.

But with mad dogs and getting bit notwithstanding, we teenagers of our rural hometown, Hamilton, Ala., loved to share our LP’s and remember those 45’s? Those only had two songs, one of the “A”-side, the one that radio stations played the most and the “B” side, the awkward cousin that talked out of his head most of the time. That described the “B” side.

I can confide in you that I still have in my ownership of the first LP from Zeppelin and if you knew me, you would soon see that my LP’s are neatly-stacked to where outsiders could ever find them—but my three grandkids. I have promised my grandson, Gabriel, that he should receive these records because even now, at age 14, he loves MY music. He listens to Classic Rock on my wife’s radio when he rides with her to work-out at the local gym. That one shining moment about him liking my music keeps me cheered along and wanting to live long and happy.

I Had to Have This One:

Led Zeppelin I (Deluxe CD Edition)
I was addicted, as it were. I was onto Led Zeppelin due to their raging, nasty, hard-rocking music which I, and most young rockers in the world loved. I still own this LP to with my L.Z. II. I have cherished this LP and the grooves in the record are still clean.
Buy Now

As For The Zeppelin I

that is one record that I never swapped or loaned it out to buddies of the same passion: Rock Music and the likes of Led Zeppelin, who I found out from some defunct magazine, Hit Parader, that was published mostly for teenagers, some hip writer, I forget his name, in his critique of Led Zeppelin the first LP, he said that Zeppelin’s music was the dirtiest, nastiest, and soothing music on earth. Most of my friends were confused at this writer’s take on Led Zeppelin’s music, but I, among all of my friends, understood what he said.

And with each time that I would get out my Led Zeppelin II, from my secret hiding place, I knew that I just had to have Zeppelin II (with “The Immigrant Song”), so I had to be patient. I even used that mental discipline: If You Can Think it, You Can Have it, so in a few months, I ran across this lovely girl, blond, single, and driving at 1960 Chevrolet. It was love at first sight. The girl with gold hoop earrings, so I knew that I just had to have a date with her.

Then on the next weekend, she and I had planned to meet in another town near Hamilton, Ala., my hometown, and we hit it off because she loved to laugh and talk about music. Heeeyy, ooooo! As the late Ed Macmahon would say to Johnny Carson, “The King of Late Night TV,” but when she started talking about an album she had . . .my heart stopped. Led Zeppelin I, she said that she loved it and that I should listen to it.

That was our first date. On our second date, she brought her copy of Zeppelin I and I could not wait to hear it. But I came armed and prepared. I had brought a few of my LP’s that I did not like, so when I showed them to her, she loved them. Then with the confidence of a riverboat gambler, I said I will give you these two albums for that one Zeppelin I album, how about it?

As if an angel had tapped her on the shoulder, she handed it to me and I never bothered telling her that I would keep it forever.