Welcome to our round up of the best Loki T-shirts and merchandise! There's a very poorly kept secret in the comic book world, and it's this: people love the villains.

It's easy to see why: they have more fun, they enjoy causing trouble (that the hero has to fix). There's something compelling about villains. And that has translated into a devoted fan following for Loki. Loki first appeared in 2011's

Thor and was the major villain in the biggest movie of 2012: The Avengers. Now he's set to reprise his role in Thor 2: The Dark World.Over these two movies the Loki phenomenon has grown into a large and faithful following that rivals the superheroes themselves. The fans call themselves "Loki's Army", and you will find fan sites all over the world.

Why do people love Loki?

After all, you're supposed to like the heroes and hate the villains, right? Well...villains are more fun. Loki is also a more complex character than the relatively straightforward Thor. Loki has more nuance, and tragedy in his heart. He learns that Odin is not his father, and must live under the shadow of everything Thor does. As a result, he has learned to scheme to get what he wants, and that's part of what makes him so fun. You never know what he's going to do next.

I really think that much of Loki's cult following has to do with the enthusiasm and skill that Tom Hiddleston brings to his performance as Loki. He really seems to love playing this character. We've included a vidoe below where you can see Hiddleston's passion for playing Loki come across in the interview.

We're featuring the best and most creative Loki merchandise that has come from this passionate fanbase. There are some great Loki T-shirts on Cafepress and Zazzle, as well as Loki iPhone Cases and Mugs. There's also Loki action figures (including a

If you find some cool Loki merchandise that you think should be featured on this page, let us know in the comments!

Marvel Men's I Am Loki Costume Hoodie, Black/Gold, Medium
This is a sweet hoodie that Superherostuff just released: a horned hoodie that looks awesome (and warm). It's 60% cotton and 40% polyester.
Buy Now

There are some very talented and creative graphic designers that work for Redbubble. One of the fastest growing art communities on the internet today, Redbubble has fully embraced Loki's popularity and so you will find a huge amount of T-shirts and cases inspired by everyone's favorite trickster. There are "Hello Kitty/Loki" mashups, Loki's Adventure Time, and many more creative mash-ups.

I want this action figure. I think a great idea would be pull pranks on your roommates by hiding their favourite thing: cellphone, Xbox game, etc....and leaving a Loki figure in its place. "You've been Loki'd"... 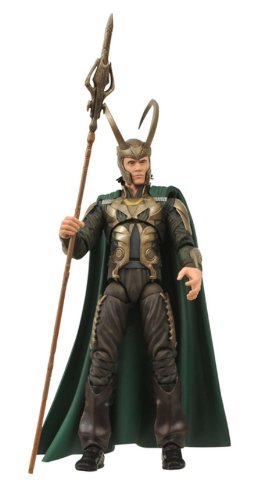 Diamond Select Toys Marvel Select: Loki (Movie Version) Action Figure
This action figure is from "The Avengers" film and larger than the average action figure (7 inches). It also comes with a mischievous Tom Hiddleston smirk on the box as well. You should hurry: this one's been selling out all over the place.
Buy Now 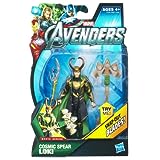 Hasbro Marvel Avengers Movie 4 Inch Action Figure Cosmic Spear Loki
This is a 4 inch version of Loki that is designed based on his costume on the Avengers. It also comes with a pretty awesome cosmic spear!
Buy Now

So you enjoyed Loki's character in the movies, but how is he in Comic Book form? The film version of Loki is obviously different from the comic books, although he is often the most interesting character in the Thor comics. I've highlighted three of my favourite series featuring Loki.

Thor & Loki: Blood Brothers
Loki finally bests Thor and is king of Asgard, but is the throne what he thought it would be? An excellent mini-series told from Loki's point of view.
Buy Now 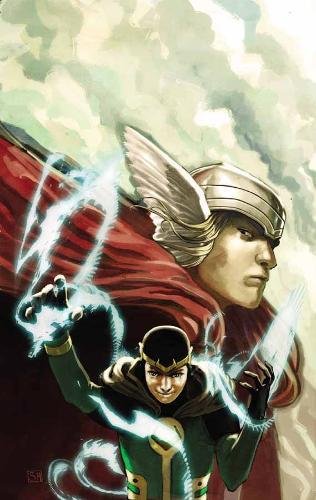 Journey Into Mystery: Fear Itself
Loki is a kid again, and trying to walk the righteous path isn't always easy when your former self was so bad. The Serpent and his Worthy have risen and are bent on destroying the earth. Loki holds the key to stopping them, but is he willing to pay the price?
Buy Now

Who Would You Rather Invite To Your Party? 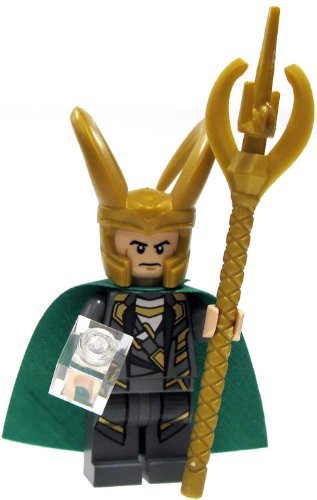 Lego Marvel Super Heroes Loki Minifigure
How adorable is this? This Lego mini figure even has a little tiny fabric cape! I think Loki works better as a Lego figurine. Look how menacing he is!! The Lego mini figurine also comes as a keychain so you can carry Loki with you everywhere you go. Why? To remind you that mischief rules!
Buy Now

In addition to iPhone 5 cases Redbubble also has cases for previous generations (iPhone 3GS,4,4S) as well as the iPod Touch and the iPad. The cases at Redbubble are top quality: they print on "Uncommon" brand cases, which if the name sounds familiar are one of the case brands that Apple sells in their store. They have also have a patented printing process called TATT that embeds the colors into the case itself (instead of on top) so you don't have to worry about fading over time.

I love Zazzle. Their shirts are so soft (they come from American Apparel). This shirt's nice green color would actually go with my blonde complexion.

Loki himself recently tweeted a picture of himself wearing this shirt from Mighty Fine, a T-shirt site that specializes in comic book shirts and other merchandise. He's just like the rest of us!

T-shirt site "We Love Fine" recently had a contest where artists could submit their designs for a Loki T-shirt. Loki himself, Tom Hiddleston, actually helped choose the winner (pictured). I could see Tom choosing this one. It approaches his philosophy for Loki: villains have more fun!

Here Tom Hiddleston talks about his take on Loki. You can tell that he takes pleasure in playing this kind of character: "He's one that brings the party"...

Feel Free to say Hi in the Comments!