The Best 80's Music and Songs Were Soundtracks

Movie soundtracks were golden in the 80's. The songs and music of the 80's put to movies marked a high point in the music industry. I will list a few of my favorites, and as fans of the decade want to add someone while we still have the performance on video, please tell me of your wish list for additions to this collection. Please remember that the theme of this webpage is the contribution of Rock and Roll performers to the soundtracks. In many cases the biggest hit was not by a rock star. That hit won't be included here.

Movie soundtracks often were made without the artist being associated with the hit song. Probably only a handful of people even knew that National Lampoon's Holiday Road was written and performed by Fleetwood Mac's Lindsey Buckingham.

The eighties were a fabulous time of creativity for comic movie makers. With the Saturday Night Live people making great movies, it was easy for creative minds to employ competent and successful actors. A good script wouldn't get lost, because the movies had star power. These movie hits had major star power and fantastic songs. I picked my favorite songs and the biggest stars of rock who sang them, though many did not know who actually performed the songs at the time:

Glen Frey of the Eagles: The Heat Is On

Bill Medley of the Righteous Brothers and Jennifer Warnes: I'v Had the Time of My Life

Phil Collins: Take a Look at Me Now 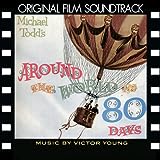 Around the World in 80 Days (Original Film Soundtrack)
Buy Now