Fear is rarely lost in translation and the horror genre holds a universal ability to prey upon both primal fears and psychological terror. Such universality is embodied in writer-director Lorenzo Bianchini's Italian horror film, "Across the River," which left me unhinged at its U.S. premiere at the Telluride Horror Show in 2013. Like many festival gems, it's been hard to find the film for consumption, but recently (as of November, 2016) it has been available on

The film's dialogue and action are sparse, to put it mildly, but the film's exercise in tonal and visual bleakness, densely layered atmospherics as well as methodical pacing creeps under your skin.

International (English) Trailer "Across the River"

Bianchini's scare tactics are a slow burn of the psychological order that leave you wandering in the unknown of a single character's doomed situation. It introduces a lone ethologist, Marco Contrada, played by a sadly undiscovered Marco Marchese, surveying and tracking wildlife in a Northern Italian wilderness near Slovenia. A seemingly routine tracking of wildlife cameras and markers begins to reveal some disturbingly unexplained happenings. His findings bring him quite literally, "Across the River," and he stumbles upon the fascinating, albeit creepy, ruins of a village.

Filming Location of Ruins in Topolò 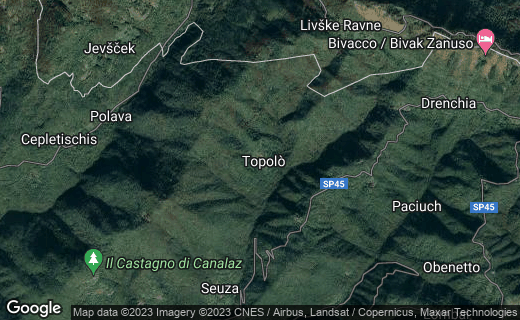 Ethology: Study of animal behavior in its natural habitat.

The man is virtually alone in the woods, and he seems to inhabit this existence comfortably. The only other characters we encounter are an elderly couple living in their rural home, presumably in the area, as they share hearing the same eerie, blood-curdling screeches that echo across the night. From these screeches, the footage the man obtains from his cameras around the forest, to findings of decimated animal carcasses, it's evident there is something not to be messed with.

In most horror films, the implausible happens and characters frustratingly continue on a path they should not, without justifiable reason. This is what makes, Across the River, so convincingly chilling in that Marco must continue pursuing the strangeness - it is his job as an ethologist.

Suspension in the Unknown

That's all you need to know, or should know going into Across the River, as it's not a matter of plot spoilers per say, so much as the film's scariest moments are in not knowing. The atmospherics are anxiety inducing, through its moonlit cinematography and otherworldly soundscape, as Marco lurks through the woods and in this tattered and cursed village ruin.

What may seem like the film's unbearably plodded pacing, is a methodical and intentional hypnotism. As Marco is slowly entranced by this ominous environment, we are pulled into a nerve wrecking labyrinth of shadows, cryptic debris, and ghastly surrealism.

German Trailer for "Across the River"

To embrace the film, watch it alone in the dark on a rainy night. It has drawn mentions of David Lynch, with a noted visual homage to Twin Peaks. (Birth Death Movies) The atmospherics have also garnered comparison in the methodical pacing to the likes of Roman Polanski and Alfred Hitchcock. (SpannersGerm669)

It is not a perfect story by any means, with unexplained holes and exposition that lacks finesse. Across the River is nothing like the Italian horror films of Dario Argento or Giallo films, but it will get inside your head all the same.