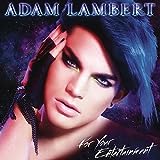 For Your Entertainment
Buy Now

Lambert Breaks Free and Prepares for CD - His Way

"Get ready for a sonic lobotomy!"

That was Adam Lambert’s reply to an entertainment reporter in September when asked about his upcoming CD, scheduled to debut on November 24th. Recently freed from the confines of American Idol, Adam has an unchained melody and he’s ready to sing it, Lambert-style. It’s unclear who is more pumped up about all of this; Lambert’s fervent fan base or the man himself. He's offered a few comments on the subject, most recently to his followers on Twitter “I know it sounds corny, but this album is a dream-come-true. I am lucky to be working with the BEST producers & writers in the world!”

And it’s true. Not often is a freshman recording artist awarded that prize. The not yet titled CD, that will contain a “little bit of everything” according to Lambert, is one of the most highly anticipated releases of the year. A procession of mega talent producers and writers circled outside the stage door as American Idol ended last May. They found nothing “second place” about Lambert, and were eager to facilitate his introduction to the masses. And the masses are already lining up for a listen. Just recently, Amazon announced a presale of the upcoming CD, and within hours, it grabbed the #1 spot on their top 100 music bestsellers list. Best Buy and Barnes and Noble soon followed with presale options of the CD, as well.

How’s that for anticipation?

His current loyal minions, who are experiencing interim withdrawal, can expect two song releases prior to November 24th- and they can't get here soon enough. The first, Time for Miracles, is a made-to-order classic rock ballad penned specifically for Lambert, and will be featured in the upcoming disaster movie 2012. The song and its songster have already been heralded by Brian May of Queen, who performed with Lambert on the American Idol Season Finale. May has been quoted as saying "I'm not easily moved to jelly by male vocalists ... but Adam's voice reaches out with sensitivity, depth, maturity, and awesome range and power which will make jaws drop all around the world. It’s an awesome performance."

This endorsement from a music legend who worked beside the late/great Freddie Mercury, has peaked the interest of those unfamiliar with Lambert. His present followers, however, are beginning to think it will take something just short of a miracle, to get it released. The reason for the delay is unknown, but it's causing his natives to get very restless.

The second release is reported (though not yet confirmed) to be a song co-written by American Idol judge Kara DioGuardi, called Strut, and will be featured on Lambert’s CD. The “Depeche Mode-meets-Queen” style anthem, is projected to live up to its name, and display the wide range of vocal talent that Lambert has rapidly become acclaimed for. His theatrically seductive performances on American Idol, and on the recent Idol tour, leave little doubt that Strut will score big with fans.

Scoring big should not be a problem for Lambert, either, And when he does, don’t be surprised…

For now, a patient drumbeat can be heard echoing through the halls of Lambert's Twitter and Facebook abode, and on his official website, as his loyal Glamberts wait to hear that voice again...

The voice that turns liquid to gold.

For updates on Adam Lambert