Adding a Pickup and Pre-Amp to an Acoustic Guitar

I built three acoustic guitars from scratch. The first was just to see if I could do it, the next two were built to see if I could overcome the mistakes I made on the first one. One of those sounded great , the other sounded a little muted. I thought adding an electronic pre-amp and pickup to turn it into and acoustic/electric guitar would help.

After shopping around online and reading some reviews I decided to order a low cost, about $36, preamp and pickup on Amazon. It was the Cherub G-Tone GT-5 which included an under the saddle piezo pickup, preamp with 3-band equalizer, reverb, delay and tuner.

To install this I needed to cut holes in my guitar, one for the pre-amp unit and one for the output jack/battery holder. It is powered with a 9V battery. I approached cutting the holes carefully and with some reluctance. . I made card board templates and slid in the components to test the fit. I first connected the device before cutting holes, to test if it even functioned. I decided to mount the pre-amp on the lower bout, visible to the guitar player, obviously. 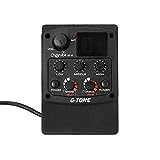 The pickup element is a cylindrical piezo that is designed to fit underneath the saddle. The inlet that the saddle sits in the bridge needs a small hole at one end so the element can snaked in from inside of the guitar body. The element is about 2mm thick so the bone saddle needed to be sanded to remover material from the bottom, otherwise the guitar action would be too high. The trench in the bridge can be made deeper if need. I did a little of that too. I used a small round file to make the bottom of the saddle somewhat concave to fit the shape of the piezo element.

The areas on the side of the guitar were first covered with masking tape. I traced the cut outs from the templates I used earlier onto the masking tape. I used my rotary tool again with a thin, flat abrasive disk to cut as much of the hole as possible. I finished carefully with a hacksaw blade. A small file and sandpaper were used to open the holes more where needed.

I connected the preamp with the wiring and the hold down clips inside the guitar body. The last steps were to fasten the pre-amp and output jack to the guitar body and re-string the guitar.

I found this set up to be quite sensitive with my Roland amplifier. The tuner works great but I am still playing with the reverb and delay settings to get the sound I want..