After watching Friday the 13th: The Final Chapter, I went to YouTube and watched Siskel and Ebert's video review on the movie. Boy, were they angry and offended by this movie (especially Ebert), but they weren't nearly as angry as some of the fans who commented on the video. Some of the fans were civil, while others were saying things like 'does Ebert really expect a fun little slasher film to be on par with 'The Godfather'?" (which is a stupid question, by the way), and "All the critics are like. "These movies suck and are immoral trash." And us friday fans are like who gives a sh*t lets watch some awesome slashing action."

If all you want is some "awesome slashing action," then yeah, this movie's for you. It's all slashing with little to no thought put into the characters, dialogue, and plot. That, actually, can accurately describe all the other movies in this franchise, which may just go to prove that Youtube user's point. The Friday the 13th movies basically exist to watch people get slashed, and really, why should anyone give a hoot about the people getting slashed, especially if the kills are 'awesome'?

It's because slasher movies are part of the horror genre. They're supposed to be scary, and when you have characters worth caring about (or who are at least somewhat interesting), you have the potential to create some scary scenarios. It isn't scary to simply watch some random person get cut up. There's more to scaring an audience than just that, and if you want proof of this, watch some of the earlier A Nightmare on Elm Street movies, or even the original Halloween.

Friday the 13th: The Final Chapter is all about the killing. There's not even a lot of build up to the kill scenes. It's just gore and more gore. How anxious is it to get to the killing? There's a scene early on involving a female hitch-hiker sitting on the side of the road and eating a banana. She hears a twig snap behind her, and then BAM! Jason shoves a spear in the woman's neck. What's odd is that she's neither a horndog nor an annoying character (the sign she carries with her is pretty funny) like most of Jason's victims. Maybe he had a problem with the way she worked that banana peel.

After an opening teaser set at the city morgue (where Jason dispatches a truly revolting character named Axel and a young nurse), we're back in the woods near Crystal Lake. There, we met a divorced woman who lives with her teenaged daughter Trish and young son Tommy (Corey Feldman). Mom likes going on morning jogs with her daughter, and Tommy likes to play computer games and make monster masks. End character development.

Next door to them is a summer home that a group of stereotypical teens rents out for the summer. Among them is Crispen Glover, who actually turns in a charming and amiable performance. I kind of liked his character, and some of the best scenes in the movie involve him and his attempts at interacting with women (the funniest scene shows him dancing to an 80s rock tune). The rest of the characters are not as annoying as the characters in the previous movie, but that's really all that can be said about them.

There's also a camper nearby, who knows that Jason is on the prowl and is looking to get even with him because Jason killed a young woman he knew named Sarah. Like most Friday the 13th characters, the man's an idiot. There's one scene where he and Trish are in the basement of a house. When Trish screams that Jason's here, they both run up the stairs before he stops and says, "Wait, I need to go get my knife!" Mind you, Trish has a frickin' machete in her hand, which is far more useful than that pinkie sized blade he's wanting to retrieve.

It gets better. Of course, Jason shows up when he goes to get the knife, and what does Trish do? She just stands by, watches as Jason butchers him, and starts crying. With the way she was acting, I was halfway expecting her to wipe her nose with the machete.

Director Joseph Zito manages at least one mildly suspenseful scene involving two characters swimming out to a raft in the middle of a lake (first it's a girl, then her boyfriend). It might have been scary if I had reason to care for the characters, but never mind. Apart from that one scene, his work here is pretty by-the-numbers. Everything from the cinematography to the musical score to the sets are shockingly bland. It's enough to make you miss director Steve Miner, who at least made part 2 into a good looking movie.

As for Jason, he seems pretty pissed off here. I guess that's to be expected when a psycho killer gets his butt kicked two movies in a row, but it also leads to a number of kill scenes that are really shockingly vicious. Maybe that's why fans of the franchise like this one the best; it's the goriest film in the franchise that I've seen (granted, I still haven't seen Jason Goes to Hell). I actually found many of the kills here to be off-putting. I'm not usually a squeamish viewer, but the violence in this movie kind of turned me off (one guy gets shot in his giggleberries with a spear gun, and that's not even the movie's most violent death).

I'm not even going to write about the acting and the dialogue. You know they're bad. You'd almost expect them to be. What I want to talk about is Trish and Tommy's dog. After spending much of the movie running out of the house, causing his owners to go out and chase it down, there comes a moment near the end where the dog senses Jason's presence inside the house, runs up the stairs, and commits doggie suicide by jumping out of a window. That should be a rule future horror characters should pay attention to if they want to survive their dilemma: if you're faithful companion freaks out and decides to kill him/herself, maybe it's time to get the heck out of the house. 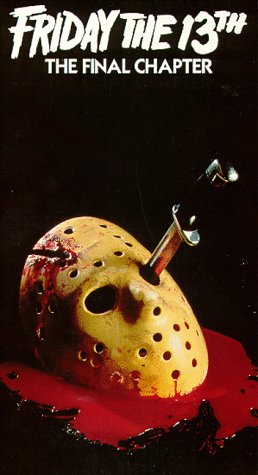