Brothers Eddie and Alex Van Halen first formed their band in 1974, originally performing as “Mammoth.”   They soon added Michael Anthony on bass, and eventually recruited David Lee Roth on vocals after borrowing his sound system for their shows.  Thanks to Eddie’s ground-breaking and inventive guitar and Roth’s over-the-top performances, they quickly became one of the most popular bands in the Los Angeles area.  They also attracted the attention of Kiss’ Gene Simmons, who financed a demo recording session for the band after seeing them perform at the Starwood Club.  Simmons’ own label turned down the band, but he persuaded Warner Bros. to take the gamble, and his instincts were soon proven correct.

The self-titled “Van Halen” album was released in 1978.  It quickly became a hit due largely to word of mouth, constant touring, and strong support from AOR radio.  Within 3 months, the album went gold, and it went platinum 5 months later.  It eventually sold over 6 million copies, and many of the songs of the album have become hard rock staples, including “Runnin’ With the Devil,” “Jamie’s Cryin’,” and “You Really Got Me.”

The classic “Runnin’ With the Devil” leads off the album and sets the tone.  Anthony’s bass beat is the perfect backdrop for Roth’s screaming vocals, and together they provide a fantastic counter-point for Van Halen’s guitar riffs.  Turn the volume up, because this song is the poster-child for loud rock music. 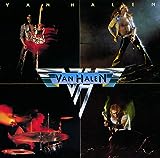 “You Really Got Me” is a cover, originally done by the Kinks in 1964.  Covers don't always succeed, but this version does the original justice while still adding something new, in this case, Eddie Van Halen’s incredible guitar solo.  Throw in Roth’s trademark yelps, and it’ll get you, all right.

It's possible that the most over-rated song on the album is “Jamie’s Cryin.’”  It’s got a great beat, but Anthony’s bass riff is probably the high point of the song.  Lyrically, it’s another generic “relationship gone wrong” song (although in this case, the ‘relationship’ is a one-night stand).   There’s no real guitar magic going on, but it’s flattering to Roth’s vocal style, which may be  why it has endured.  Or maybe enough of us have been there, done that, to want to sing along.

The most incredible cut on the album is “Eruption.”   An instrumental checking in at just over a minute and a half long, Eddie Van Halen’s performance is absolutely mesmerizing.  He blazes through it at a speed that is simply jaw-dropping; you can practically hear flames shooting from his fingertips as he pulls sounds from that guitar unlike anything that had been heard before.  Untold legions of teenage boys were inspired to try to imitate him, with little or no success.  More importantly, scores of bands that followed borrowed from his techniques and style, and brought a heavy, guitar-driven sound back into rock music in the early 80’s.

The most under-rated song on the album has to be “Ice Cream Man.”  Written and recorded by the legendary John Brim, it’s been covered by many artists over the years (including Tom Waits and Screamin’ Jay Hawkins), but Roth leads the pack.  The song could well have been written for him.  Roth has never had the technical expertise that Eddie Van Halen can boast, but his rough baritone and audacious attitude are perfect for the bluesy sound of this tune.