All About the Pop Music Girl Group Jkt48 From Bali Indonesia

What Is JKT48 and What is Their Motto or Performance Goal?

JKT48 is another one of those pop music groups that was created from the concept of the 48 group franchise. I know that when it comes to Indonesia, most of us wouldn’t think of pop music. JKT48 was formed in 2011 and it is the first “sister” music group formed outside Japan. Note that JKT48 is not a rival musical group to AKB48 unlike Nogizaka46. The group’s concept used to be based on the philosophy of “idols you can meet” until April 8, 2018 when the concept was changed to “idols that will come meet you.” Now that’s the kind of approach that will help to generate understanding, dialogue, and communication skills.

Special Note About This Article

Author’s note: because of the complexity of the Indonesian language and the names of these members I will attempt to make this article as readable as possible so I will not include every single detail about this group.

2 Major Reasons for the Creation of JKT48

The idea of the creation of JKT48 was because of producer Yasushi Akimoto who wanted to expand the AKB48 franchise into Indonesia because there was a growing interest for AKB48 in that country. The other major reason for the expansion of the AKB48 business model was because Indonesia’s growing economy was seen as a potential market for many Japanese companies (think money, money)! Akimoto then proceeded to establish a partnership with Dentsu Media Group Indonesia.

Why Was Indonesia Seen as a Great Market for idol Music?

In addition to this, Indonesia was seen as a great market for the idol business because of the county’s young population. In fact, as of 2012, about half of Indonesia’s population is under the age of 30.The people of Indonesia also loves Japanese manga series such as Slam Dunk and One Piece.

Yasushi Akimoto About Why He Chose Indonesia for Musical Creativity & Expansion

“People in Indonesia were interested in AKB48. That is why we decided to try it in Jakarta. Kids watched AKB on the internet and they want to do the same, but they don't know whether they have talent. Also it's difficult [for them] to go to Japan to audition."

Yasushi Akimoto was responding to a question about why he chose Indonesia as the first target of the AKB48 business model expansion. He made these comments on CNN’s Talk Asia Program.

It was on September 11, 2011 that the formation of JKT48 was announced during an AKB48 event in the venue called Makuhari Messe in Chiba. A large number of girls, 1,200 auditioned for the group but only 51 of them were chosen to go to the second round. Those in the final round were judged based on how they performed on the AKB48 song Heavy Rotation and a song of their choice. The first 28 girls of the first generation were chosen on November 2, 2011. They ranged in age from 12 to 21 years old. The group’s first theater performances were held at a temporary location from May 17-20 2012. However, the official JKT48 Theater did not open until September 8, 2012 as there was a set list of 16 songs that have been translated into Indonesian. The theater is small, having a seating capacity of 180 persons and standing room for just 30 people. In terms of the design, it is designed like the AKB48 Theater in Akihabara.

A Map of Jakarta Indonesia the Birthplace or Founding of JKT48 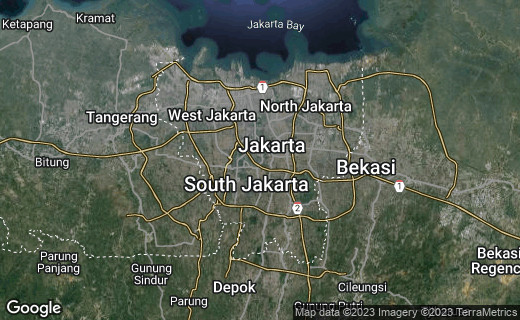 It was on August 13, 2012 that the management began accepting applications for auditions. 4,500 people applied and 200 of them were selected for interviews in the next month. That pool pf applicants was narrowed down to 67 and then to 31 where the final 31 were chosen at a final audition in November of that year in Japan. Then JKT48 gained two non-Indonesian members Haruka Nakagawa and Aki Takajo.

It would be in February 2014 that 63 members were announced as finalists for the 3rd generation of members. And then, there were a few members that transferred or had their concurrent memberships cancelled. Rina Chikano was transferred from AKB48 to JKT48 at the end of that month. Aki Takajo and Rena Nozawa had their concurrent memberships cancelled. On April 26, 2014, the group held its first ever general election with the 16 top ranked girls taking part in its 6th single Gingham Check. The group would also go on to release their own versions of the songs Kokoro no Placard and Kaze wa Fuiteiru. The group’s general elections have been held every year since 2014.

So as you can see, JKT48 has the same kind of style in terms of entertainment and performances. Their songs are versions of the AKB48 songs and they hold daily theatrical performances as well as fan events.