I am no expert on pumpkin carving. The total number of pumpkins I have ever carved has reached... two. But, I am extremely impressed with people who carve pumpkins and make them look great. I received an email from a friend with pictures of elaborate carvings, and I was quite fascinated. I hope you will be, too, once you see some of these.

IMPORTANT NOTE: These designs are not mine, nor do I make any claim that they are. In this hub, I am not trying to make anyone any money (including myself) or market for any businesses. For legality's sake, I have included all sources for these images. As for the designs from Pumpkin Gutters, I have obtained the creator's permission to use his images.

Now that that's out of the way, enjoy these amazing pumpkin carving designs from professional carvers!

Want to Try It Yourself? 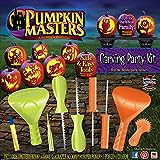 The photos above and directly below this text capsule are from PumpkinGutter.Com. These are all carved by a man named Scott Cummins. According to his FAQs, he does them all himself with various tools. He does this for fun, not for profit, and he does not take custom orders or sell his pumpkins.

I only wish that I was that talented with produce. In case you don't recognize the images, here is a list of what is being portrayed.

The following carvings are from ExtremePumpkins.com. Like Pumpkin Gutter, the creator, Tom Nardone, does this for fun, not for profit. His site is called "extreme" because, as he says, he was sick of Halloween just being cute and fun for kids. He creates pumpkins that are scary, gross, or just plain out-there. I've picked the tamest of the bunch to display here.

Here is the list of the pumpkin carvings that are below:

The pumpkins below are from miscellaneous sources. The first four are found on the Extreme Pumpkins website, but they were submitted by various pumpkin artists for contests. The fifth pumpkin was made by a designer named Karen Quinn. And the last was made by ME!

The pumpkins below portray the following: