Annoying People: What To Do About Them

Joanne Kristin has diplomas in Journalism and Arts and Science from Fanshawe College in Canada.

If I was to sit down and list all the different types of people I dislike, hell, I might never shut up. Let's face it, whether we see the best in all people or not, there is usually a select group of people that rub us all the wrong way. For me, this list extends far beyond what it should. Maybe it's because I'm not as tolerant, or I lack patience, or I've been hurt by too many people in the past, but whatever it is, I'm sure you've ran into the same type of people I've nominated on my list today, and will agree wholeheartedly on why these people shouldn't exist. Well, that's a little harsh, but I'm cranky today, so lets just go with it. Now, before I dig into this any further, I want you to know, I do have compassion, I do understand that everyone has a story, and a reason why they are the way they are, and I'm okay with that. But still. I'm sure you will be able to relate, and understand exactly what I'm talking about. I, myself, am moody sometimes, and if crossed by the wrong person at the wrong time, I too, would probably fall on their list of least favourite people as well. So, this is really just for fun and entertainment.

So today, I nominate the following people, as our least favourite types of people, and I highly recommend you not to be one of them.

These jerks are usually the steerer of the conversation. It's usually hard to get a word in, and if you manage to do so, your comment will only be followed by a smart retort, that will shoot down whatever point it is you're trying to get across. Before you are finished arguing your side of the story, they have already concluded that you are wrong, and therefore anything that comes out of your mouth is bologna. These people are often intelligent, but closed-minded, so it inhibits their ability to grow as a person. Nobody likes them, and they know this (of course), but they think it's because of their brilliant mind, rather than their condescending attitude. The best way to deal with these people is to nod and smile and remove yourself as quickly from the conversation as possible. There is no point in arguing with them, they will not listen, they already assume you're an idiot, and to them you have lost the war, before you even started the battle. They will not be swayed, and it is not worth your effort to bother trying.

The complainers. Whatever problem you have, their's is fifty times bigger. They cry over the littlest thing, and you cannot do anything but feel sorry for them. If you try anything else, you will only make the situation bigger. They will expel numerous other problems in order to try and gain your sympathy. You do not want this to happen. It's dreadful. Do not try to relate to these people. You cannot satisfying them, nor comfort them. They will only make you feel as though your problems are mediocre and you will leave the conversation feeling completely depressed. These people are the exact ones you veer away from at the grocery store, for fear you will have to hear about their great aunt's bowel obstruction. When you see these people, run.

These people are dull, to put it lightly. They will go out of their way to say hi, yet once they approach you, nothing they say will be the slightest bit interesting. You're almost always running late when you encounter them, and it's damn near impossible to get away from them. They usually are close talkers and will eat your personal space up, like a pizza on a Friday night. Their charm is usually dressed with bad breath and neverending stories about the weather. To end conversations with these people you must have an elaborate story of your own, so when you go out always have one on hand. Do not, I repeat, do not ask these people questions. You do not want to stretch the conversation out any more that it already is. If you see these people, look like you're in a hurry and DO NOT make eye contact.

This person is very good at despensing advice, despite the fact that they do not have the expertise to do so. Whether it be the single friend who likes to tell you how to make your relationship better, or that, and this is one of my favourites, jerk who tells you how to raise your children, but doesn't have any of their own. They always have something to say. They are certain that if they were in your shoes, they would do it better. These people are annoying, and always the last person you would want advice from. The great thing about these people is, once they actually get in a position similar to yours, you can watch them drown slowly in their own undying words of wisdom. They are not your friend. They think they are better than you. Never answer their phone calls, they will want to come over, because they actually prefer trying to fix your life, rather than sort out the mess of their own. They are a walking time bomb and the last place you want to be, is around them when it goes off. Be cautious around these people, they will belittle you passive-aggressively and there won't be a damn thing you can do about it.

And finally, the moment we have all been waiting for, envelope please.....and the award goes to...

These are my least favourite people. Their lives are perfect. Their spouses are the best. Children are angels. They have no debt, a beautiful, always-clean house, never a problem in the world and they make sure you know it. They post it all over Facebook. But it's lies. All lies. They hide behind smiles and speak through their teeth. They always seem cheerful and happy, but it's probably just a side effect of the medication they're on. They are annoying, condescending and as phony as a landline. They are such great liars that they often believe it, and the only ones who don't know they're fake is themselves. These people drive me insane. Their children are probably distant, their spouses cheat, and they probably have some kind of substance abuse problem. They will go out of their way to make sure that you think they are perfect and their main goal is to make you jealous of their life. The jokes on them though, because they're not fooling anyone. 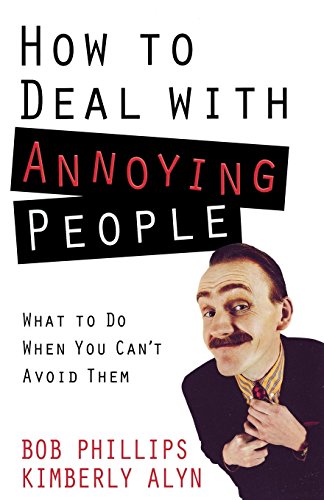 How to Deal with Annoying People: What to Do When You Can't Avoid Them
Buy Now

Don't Be One of These People...

Anyway, so there you have it. I'm sure there's more in there; the mouth-breather, the fitness junkie, the obessive compulsive perfectionist, the over-enthusiastic over-achiever, to name a few. But hey, I'm sure we've all played one of these roles at some point in our life. I think the trick is that too much of one thing is bad. I guess to even the score, I'll have to write a piece on my favourite types of people. For now, take humor in my random assessment directed by my 'moody' personality. *winks forever*

How Do you Avoid Annoying People??

What do you do when you're confronted with an annoying person??