Regionally and locally, we will hear about popular groups that started out as garage bands and entries into local Battle of the Bands contests.

Some bands or vocal groups are named after foods and some honor condiments.

Since the voice is considered an instrument in the vocal music genre, then I will include singers that may not play other instruments themselves.

Sweet Honey In the Rock

Sweet Honey In the Rock

This is a famous acapella gospel and folk group made up of legendary African American girl singers. Their web site is located at Sweet Honey In the Rock. These women performed at the White House on the Sunday before the 2009 Inauguration of President Barack Obama.

This wonderful ensemble was founded in 1973 at the DC Black Repertory Company by Bernice Reagon, who was teaching vocal workshops. She stayed with them 31 years until 2004. What an experience!

The group was named for Psalm 81:16 of the Bible. It describes a promised land so rich that honey flows when one cracks open the rocks. Elsewhere in the Bible, it states that if people will nto praise the Lord, then the rocks will cry out and do so. How powerful is that? --

38Crying, Blessed (celebrated with praises) is the King Who comes in the name of the Lord! Peace in heaven [freedom there from all the distresses that are experienced as the result of sin] and glory (majesty and splendor) in the highest [heaven]!

39And some of the Pharisees from the throng said to Jesus, Teacher, reprove Your disciples!

40He replied, "I tell you that if these keep silent, the very stones will cry out (in praises)."

Twenty different women have sung with this group, about liberty, motherhood, domestic violence, love, and racism; and many of them have contributed to writing the group's songs. In the first decade of the 21st Century, six women comprise the group and one of them performs America Sign Language for the non-hearing audience as well. Having seen this ASL performing, I feel that I can hear the music and words better when watching ASL than when I listen to the performance. But, putting them together makes an overwhelming impact.

We Who Believe in Freedom

The Condiments Of Sound

Spice Girls founded their group in 1994 in London, England and made headlines and the top of the pop music charts with their hit single Wannabe in 1996. Which one of the Spice Girls do you like best? -

Remember the skits on Saturday Night Live for Spice Girl Tryouts? They were hilarious. Visit the girls' site at THE SPICE GIRLS.

The writers are no longer as good on that show, in my opinion. Take, for instance, the last time Christopher was on the show in 2010- 2011. He used to do the entertaining and slapstick "The Continental" each time he appeared. The last time, he had little to do at all.

Salt-N-Pepa, though, is a Grammy Award winner of a group that specializes in Old School Hip Hop. They are a trio from the Queens Burroughs of NYC that got together back in 1985. They include Cheryl James aka Wray ("Salt"), Sandra Denton ("Pepa"), and DJ, Deidra "Dee Dee" Roper (Spinderella)

Paradise by the Dashboard Light

Meat Loaf Then and Now

My favorite of all the “food groups”, so to speak. Marvin/Michael Lee Aday is Meat Loaf, sometimes with Neverland Express. He is likely best known for his Bat Out of Hell trilogy of albums.

I first saw Meat Loaf in the opening video that accompanies many presentations of Rocky Horror Picture Show (where he played Eddie). The Rocky Horrorfilm was spooky, quirky, and innovative at once and when I saw Tim Curry later as Rum Tug Tugger in a clip from the Broadway Musical Cats, all I could see was Dr. Frankenfurter from Rocky Horror.

I liked the opening number from Rocky Horror - Paradise By the DashboardLight, because it was like an opera. It told the story of teenagers rushing into what they presumed was "love" but when they married, wished the relationship was over. Ironic ("I'm prayin' for the end of time...").

Meat Loaf was also in the film Fight Club, with Ed Norton and Brad Pitt, which I appreciated for its psychological world of disassociation.

Particularly well known in the UK, even better than in the US, he performs astounding amounts of charity work.

Meat Loaf was born in Texas and was 16 at time that President John F. Kennedy was assassinated. He and friends or relatives drove to the airport the day the President arrived to see him. later, they reportedly drove toward the Dallas parade route, heard about the shooting on the car radio, and drive to the hospital to glimpse Mrs. Kennedy and the Texas Governor, who had also been shot. Individuals such as Mr. Aday have such gripping stories to tell, because they lived at historic moment; and, I feel that these people are living history books that should be honored.

After an illness that cancelled several concert dates at the end of 2008, Meat Loaf began to record again in 2009. Welcome back, Mr. Aday! 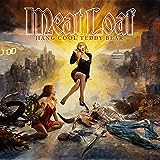 This includes one of my favorites: "Elvis in Vegas" and "Love Is Not Real/Next Time Stab Me In the Back."

Food Groups for Everyone

Which is your favorite band among food names?

Electric Prunes - I Had Too Much to Dream last Night

Other groups named after foods include

Blue Tater - a well known regional group in the Midwest USA in the 1970s.

The Cranberries - read about them at Irish Songs and Singers to Remember.

Black Eyed Peas- Probably best known now for the members Fergie and will.i.am with their solo careers, the American Hip Hop group still features of apl.de.ap, Taboo, Fergie & will.i.am. Fergie was fantastic in her performance on New Year's Eve 12/31/2007, singing a broad range of popular hits and wearing a classy and classic glittery dress. will.i.am became one of the first people to communicate via hologram during the campaign and election of President Barack Obama.

Some other interesting groups:

You will likely recognize "Popcorn."