Belly Dance: How to Choose and Play Zills

Finger cymbals - also called "zills" - may seem like an easy addition to your belly dance wardrobe. After all, they're just two small circles of metal with a piece of elastic attached. You'd think that using them would be easy and choosing them even easier. You're about to be surprised!

If you're a beginner and not sure whether you'll stick with belly dancing, it doesn't make much sense to buy expensive zills, does it?

Yes and no. Generally, the cheaper the zill, the nastier the sound. Really cheap zills will clang rather than ring! Considering that even the most expensive zills are under $50 - and you can always sell them to another student if you give up - it hardly seems worth economizing, when a few more dollars will give you an instrument that's a pleasure to play.

However, it's your choice, If you decide to go for a cheaper pair, there is only one thing to look out for. A proper finger cymbal has two slits in the centre to thread the elastic through. Don't buy a set which has only a single hole for the elastic instead of two slits: they are probably made for tourists.

The two big names in zills are Saroyan and Turquoise. Both manufacturers produce a range of zills in a surprising variety of tones. They are more expensive - but once you've played a set of proper zills, you'll think it's worth it.

If you usually play in a troupe, it's a good idea to ask the troupe leader if she has a preference before you buy - you don't want your zills to look or sound out of place in the ensemble.

I made that mistake once - I had the chance to buy a pair of Turkish zills from a former professional, and naturally, I snapped them up. Trouble was, they had such a loud bell-like ring, I drowned out the cheap zills played by the rest of the troupe! Besides being rude, it was embarrassing - because as a beginner, I wasn't that good at the time, and my mistakes could be heard loud and clear...

Note that if you're a tribal dancer, you will probably need the larger size zills. 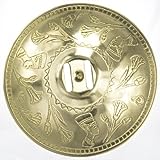 Nefertiti Finger Cymbals/Zills/Zils
These zills by Saroyan are amazingly good value for such a beautifully crafted instrument. I bought them because I loved the Nefertiti engraving, but I still have them, years later, because their sound is SO sweet and pure.
Buy Now

Killer Ziller: Belly Dance Finger Cymbals
I know of two DVD's on how to zill, but this is the one I recommend to beginner students. It's an excellent introduction and contains some great drills to help you master the art. You will need an understanding of basic belly dance rhythms before you start, though.
Buy Now

It's not all bell-like!

We generally associate zills with a bell-like ringing sound, and your belly dance teacher may correct you if you strike the zills face-on, which makes a "clack". In fact, the original instrument (the sagat) didn't ring at all, and Egyptian audiences still prefer the clanging sound (which Western dancers like me find ugly).

The clip below explains the various way to hold your zills and the different sounds they can make. In the next video, you can hear them in action.

The second video also demonstrates how to practise zills - sitting down! Dancing with zills is a bit like patting your head and rubbing your stomach at the same time: it's unrealistic to expect to dance and play at the same time until you've mastered the zills on their own. It does take patience, but taking the time to learn the zills like a musical instrument, without any dance steps, really will pay dividends in the end.