Many of my favorite tv series happen to be British. Fortunately, both BBCAmerica and the SciFi channel (oh, excuse me, SyFy), and occasionally HBO and Showtime wind up airing some of my favorite series.

But if you've missed something, never fear. Many of the best British tv shows are also released on DVD so you can catch each series whenever you feel like.

And yes, I'm totally using the words Favorite and Best as interchangeable here because I'm quite certain my taste in television is awesome! Hopefully you'll agree and check some of these shows out if you're are not watching them already.

Some of my top pics for favorite British tv shows include Merlin, Doctor Who, Torchwood (which is coming back!) and long-running spy favorite, MI-5. The new Doctor Who

The British tv series, Doctor Who, is the longest running SF television show, but it was in hiatus for many years after the 1989 series aired. Relaunched in 2005 with a fresh and hip new look, Doctor Who is currently presided over by television producer and writer Russell T Davies.

For those unfamiliar with the series, Doctor Who's cast changes for the actor playing the Doctor himself are covered within the story by a process called regeneration, i.e. the character regenerates his physical body whenever he is close to death, but this process completely changes his appearance and personality.

At any rate, Doctor Who is a fun and occasionally cheesy romp through time and the show is oftentimes very moving. 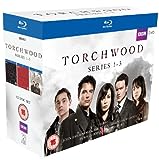 Torchwood [Blu-ray]
All three seasons of Torchwood are now available on Blu-Ray. This box set includes seasons 1-3, but does not include Miracle Day or Children of Earth.
Buy Now

Torchwood is a spin-off of Doctor Who, featuring a character introduced during its first series, Captain Jack Harkness, played by the incredibly popular (and handsome) John Barrowman. While Doctor Who is a family show, Torchwood very much isn't. In fact, the first series of Torchwood could be criticized for trying a little too hard at being edgy, but it quickly settled into itself during season 2 and of the two related shows, I actually prefer Torchwood to Doctor Who.

The reason for my preference is Jack Harkness. Due to an event that occurred in the first series of Doctor Who, Captain Jack is for all intents and purposes, immortal. He is, as far as we know, a time traveller from the 51st century, but the rest of his background is pretty mysterious and only bits and pieces of it get revealed as the series unfolds.

What we do know is that he's bisexual, incredibly charming and a man of action. For all his lighthearted banter and flirtatiousness there is also something quite tragic about his circumstances and his history which gives the character some gravity and Barrowman balances these aspects perfectly. His team is intensely devoted to him and so is the audience. I seriously love this show!

Here, watch my favorite clip from the series. Jack teaches Gwen how to shoot in the 3rd episode of Torchwood. Merlin! Arthur! I love this show to pieces. BBC's Merlin series is so much better than it has any right to be. I think I was expecting something along the lines of Xena and Hercules, but in fact the show is quite excellent.Colin

It's a fresh new look at the legend of King Arthur and everyone is just a little bit different than expected.Merlin is working as Arthur's manservant and Gwen is one of Morgana's maids.

Merlin, Arthur, Morgana and Guinevere (Gwen) are all ridiculously attractive teens verging on adulthood. There's no round table yet, and Merlin is just starting to understand and explore his powers. Arthur is something of a prat, but the greatness is there, just waiting to be developed.

The show is a complete delight and has already been renewed for a second series by the BBC. It will begin airing on NBC in the States in June 2009.

Life on Mars ran for two series during 2006 and 2007. The recent US series, Life on Mars, was based on its UK precursor, using mostly the same scripts. It wasn't a bad remake at all, but it had a very short life on US television. But though it wasn't bad, it certainly wasn't as goo as the British series.

Set in Manchester, Life on Mars is about Detective Chief Inspector Sam Tyler who gets hit by a car and wakes up in the year 1973. He's still a cop, but now just a DI, and being a cop in the 70s is nothing like being one in 2006. There's all sorts of interesting ways that the case Tyler was pursuing in 2006 weaves itself into the past he finds himself now living in and Sam spends much of the series questioning his reality. Played by the always excellent John Simm, you will be right there with him as he tries to figure out what the hell is going on.

Occasionally, Life on Mars airs on BBCAmerica, but you can also pick it up on DVD. I've written quite a bit more about the series in my Life on Mars UK hub.

MI-5 or Spooks as it is known in the UK is one of those shows that just keeps on keeping on. The first series aired in 2002. Spooks is now in its 8th series and since season 1 has undergone a remarkable cast change. Nearly all of the main characters from season one are now gone and now some of their replacements are gone as well *g*

MI-5 refers to Britain's Security Service, a counter-intelligence agency primarily concerned with internal security in the UK. The TV series portrays the a group of MI-5 Intelligence Officers as they go about their work. There's also a strong sudsy angle due to a focus on their personal lives and interpersonal relationships.

It frequently airs on BBCAmerica and you can also pick up several of the DVD sets as well. I'd start with Volume I, as I think Tom Quinn (played by Matthew MacFadyen) is still the most interesting MI-5 protagonist.