There are hundreds of recordings of Mozart's Requiem. The following are four of the best Mozart Requiem recordings available, in my opinion. I've chosen them based upon their individuality as well as the critical acclaim that each has received. For new listeners the first two are probably the best introduction to this phenomenal work, while the last two are two highly original performances for those looking for unique interpretations. I have titled each selection according to the conductor. Also included are links to purchase the CD's or MP3's from Amazon. iTunes is another great resource as well as MP3 Panda, where you can find entire albums for around $1 and individual tracks for about .15 cents. 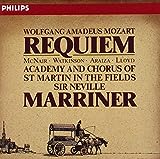 This recording of the standard Sussmayr version is regarded as one of the most interpretively faithful and satisfying recordings. Marriner, who contributed greatly to the soundtrack of the film Amadeus, delivers Mozart's Requiem in a manner both masterful and mature. There is no deliberate showiness or desire to provide a unique interpretation here. Instead, Marriner lets the music itself deliver its own powerful and moving message. For an initial introduction to Mozart's Requiem this is probably the best all around choice. Even those listeners who have ventured beyond the Sussmayr version still highly regard Marriner's recording of it. 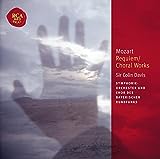 Sir Colin Davis' reading of Mozart's Requiem is full of operatic grandeur and is highly recommended to those who enjoy a big chorus, big orchestra, and big sound. It is forceful in the climatic sections while remaining warm and expressive in the softer passages. Of particular note is the wonderful solo quartet from the "Recordare" part - it seems to have come right out of an opera. This recording is another great choice for those new to the Requiem, primarily because it is a great example of the "middle way". It is neither interpretively bold nor pedantically lifeless, instead it pleases on all accounts.  This recording also features a few other choral gems by Mozart. 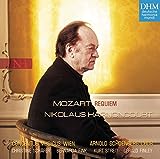 In brilliant and true SACD sound this second recording by Harnoncourt of Mozart's Requiem is highly original. You won't find that "flowing wall of sound" that many other performances give though. There is plenty of big sound, but not in the usual romantically overblown way. Instead, it's punchy lines and striking contrasts are delivered for maximum emotional impact. From the eerie terror of the Dies Irae and the casual elegance of the Kyrie, through to the restless and anxious Lacrimosa, the listener finds a strikingly new intrepretation of Mozart's conversation with death.

Harnoncourt assembled young and vibrant soloists for the chorus which, though small, has a highly focused and sharp impact. The conductor's very own period instrument ensemble, the Concentus Musicus of Vienna, likewise provides the needed urgency and strength for such an edgy interpretation.

You'll find no romantic sentimentalism here, but rather an enigmatic rendering of the vulnerable and uneasy emotions which the idea of death evokes in us all - something that a Requiem Mass is meant to convey. Whatever your preferences, the sonic clarity of this SACD by itself is reason enough to try it. 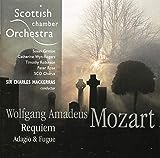 Sir Charles Mackerras' 2003 recording of the Requiem has been universally acclaimed by critics. He uses the Robert Levin score, who amended the Sussmayr completion of the Requiem, in order to rectify some obvious discrepancies. Here, you'll find a slightly altered Lacrimosa, Sanctus, and Benedictus. Two of the primary changes are with the Hosanna fugue and the Amen fugue (it doesn't modulate like the Sussmayr version), which are more in keeping with the Mozartean church fugue style.

However, Levin didn't seek to discard or destroy Sussmayr's version outright, but simply sought to critically evaluate it. What we end up with is a Requiem that truly sounds as if it was entirely completed by Mozart. If you are at all familiar with Mozart's Mass in C-minor or even his symphonies then you'll surely recognize the decidedly Mozartean feel that this version of the Requiem has throughout. As an added bonus this recording comes with Mozart's Adagio and Fugue in C minor. It's also available in the amazingly clear SACD format.

You'll certainly find more great recordings, but in the interest of brevity I limited my picks for the best Mozart Requiem recordings to four. Happy listening!