“In my lifetime, we've gone from Eisenhower to George W. Bush. We've gone from John F. Kennedy to Al Gore. If this is evolution, I believe that in twelve years, we'll be voting for plants.”

The biography posted on Lewis Black's website cites the fact that he was, “colicky as a baby” and that, “it seems he was destined to be angry and easily irritated.” Whatever the impetus for Black's sarcastically caustic comedy was, it is welcome relief from the vanilla pablum offered up by those who fear offending someone. Black's first love is the theater, wherein he oversaw the production of over 1,000 plays, and it is also where he honed his first stand-up routines, performing as an emcee before the performances. Black became nationally known through his Back in Black segments on The Daily Show with Jon Stewart, moving on to cross country tours, television and movie appearances, voice over work and even penning a few books along the way. His delivery, which is more like a sustained primal scream, is an angst laden cathartic release for the audience as well as himself.

During a recent telephone interview from his New York home, I asked Black whether he thought that political satire helped people form their outlook about certain issues.

“I think it plays a very minor role only in the sense that it might catch somebody's eye and gives them a way to look at something differently.” Black went on by saying, “I think the role it really plays, to be honest, is it allows people to stand back ten feet from what the hell they're yelling about for five minutes and take a look at it...and then they're right back into it. I also think it's a release of frustration.”

Black, known primarily for his social and political commentaries, surprised me with the revelation about his views on politics.

“I'm not so much interested in politics...it's like nauseating. What I find intriguing about it is the way that it effects people and what it really means. Because they (the politicians) puff and they run their mouth, but while they're doing it, there's millions of people who are being screwed by their nonsense. I generally try to go and take a look at what that means.” Returning to the previous question, Black ended his thought by saying, “I think that may be where political satire leads. It allows people to look at it in human terms and not big, broad strokes.”

Black describes his own political standing as being a socialist. We spoke at length about how people trot out the word socialism as if it were synonymous with Marxism and communism and how few people knew the differences.

“Most people don't even know what socialism is. I mean, it's really unbelievable. The US military is the possibly largest socialist entity in the world.” Black went on to say that, “They just throw a label on something. They've beaten the dead horse of liberalism and now they've gotten to socialism and that really irritated me because I'm basically and always have been a socialist. Ever since I was a kid. I don't know why people are so afraid of socialists...there's only seven of us in the country. And to label Obama as a socialist is disgusting. I mean, if you look at who he's put around him in terms of the economy...” Black said, sarcastically. “Oh boy! What a group of Marxists!”

Socialism is a word that has been bandied about as of late due in no small part to the ongoing argument over universal health care. In reference to other countries that already have some form of socialized medicine in place, Black said:

“Well, they're ahead of us health wise. The latest stats say we're nineteenth. What else do you need to know?” Black went on a rant, stating, “I don't know how health care becomes a partisan issue. It can't be a partisan issue. If it is a partisan issue, then something is terribly, terribly wrong with us. We're maybe the most ignorant country on planet Earth. Health care is no argument. The job is to figure it the fuck out so that it works the best for everyone. There's no fight about it. You know goddamn well that insurance companies gouge, and they (the government) know it too. If you think that the government can't handle it, then figure out some sort of quasi-institution that can, because really, it's disgusting. This more than anything bothers me, and I've seen a lot of stuff in my life.”

Black ended our discussion about health care with a little epiphany he had concerning our governmental leadership:

“If there's a portion of the leadership that is so good at what they do that they can get the common man out in public, standing up for health insurance companies, then they're...that's unbelievable!” Black said. “All I kept thinking was, 'Wow! If you actually used that power for good...' Boy, wouldn't that be something?” 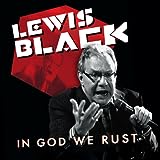 In God We Rust
Buy Now