The author of these hubs offers guitar lessons worldwide via SKYPE.

To purchase the PDF copy, please follow this link: 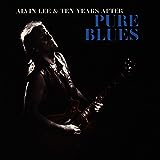 If You Are Reading This You Must Have Been Guided Here By A Blues Deity And You Should Thank Your Lucky Stars--5 Of Them. This Cd Is A Compilation Of Alvin Lee's Best Blues/Rock Numbers Over The Past 28 Years And Demonstartes Alvin Lee's Musical Talents And Versatility. On Various Tracks Mr. Lee Sings And Plays Bass, Piano, Drums, Guitar And Vox Not To Mention The Fact That All But One Song, "Help Me" Are Alvin Lee Originals. As An Added Bonus, Three Tracks Also Feature George Harrison On The Slide Guitar. Since This Band Ordinarily Plays Rock Music, Blues Fans Would Have To Locate And Buy 8 Of Their Cd's/Albums To Otherwise Hear These Gems And You Would Still Be Missing :Outside My Window" Which Was Previously Unreleased. A Highly Recommended Buy!

Most often, blues is played with barre chords as opposed to open chords. With this progression, try using

Once you have mastered this group, take the progression up the fretboard so it is turned around.

The more positions and voicing you can play these chords in, the better. It breaks up the monotony.

This entire solo in based in Gm Pentatonic Box Pattern #3

The scale begins on the third degree of the Gm Pentatonic scale: C. It is a two octave scale. Before attempting the solo, practice the scale as quarter notes, eighth notes, triplets and sixteenths while maintaining the same tempo.

The bent notes are all full bends (two frets). A great way to test your ear's intonation is to play the target note, that is, the pitch to where you are trying to bend the string to (in this case, B♭ to C), then bend the string up from B♭ and try to match the pitch, C. Great exercise for the ear!

All the phrases resolve on the root of the chord. This is a sure-fire way of creating a good solo. Try to learn the root G, the fourth C and the fifth D, in all box patterns. A good exercise here would be to learn them in this pattern, Box #3, work with them, get them ingrained and move into other patterns. Other strong target notes would be the third, fifth and seventh.