Chordal fills are primarily chord fragments, derived from the full chord shape. Many are based in the Pentatonic Scale. The goal is to have these fills weave seamlessly in and out of the barre chord shapes, as if they are being improvised on the spot.

Although Jimi Hendrix is credited with developing this style of playing, it goes back to earlier Rhythm and Blues players. Curtis Mayfield has long been associated with first employing this concept. Jimi and Stevie Ray Vaughn simply took the whole thing to a higher level. Hendrix's 'Little Wing' and 'Castles Made Of Sand', and Stevie's 'Lenny' are great examples of this technique in action.

The story surrounding Jimi's extensive use is that he got bored playing full chords and strumming while backing up strippers, leading to his ground breaking rhythm work. However it came about, or where it started, this style adds a pile of interest to rhythm guitar parts when employed properly. Like any fills, timing is critical. Picture a drummer coming out of a roll in the wrong spot…..total train wreck!

Fill number one is based around a Root 6 C Major chord. These barres are based on an open E Major chord. The fills are are contained within the chord (except for the note F, which acts as a passing tone). They are also based in C Major-Am Pentatonic, box pattern number two (see The Mighty Pentatonic Scale). The ornaments (hammer ons, slides), really add to the sound and actually make the licks easier to play. Two note chords are called dyads.

Fill number two is based around a Root 5 C Major chord. These barre shapes are based on an open A Major chord. Most of the fills are played off of the third finger barre on the fifth fret. This position is also C Major-Am Pentatonic box pattern number one.

In measure two, the fill moves to the root (C) and third (E) of the open C Major chord. Fill number three is just what it says: a combination of the two positions ending on the Root 6 C Major chord. Since there are no open strings in the chords or fills, all these are moveable.

Band of Gypsys: Live at the Fillmore East

This progression puts the techniques from part one to work. The D Major chord is a Root 5 barre shape with fills being played off of the third finger barre on the seventh fret. They are also based in D Major-Bm Pentatonic. Measure two moves into the C Major shape and the fills are the same as measure one but have been moved to C Major-Am Pentatonic.

When executing these fills, be aware that you are physically changing scales with the chords. This should make the concept easier to understand. Measure three resolves to a Root 6 G Major barre shape. For the most part the fills are in G Major-Em Pentatonic box pattern number two. If you analyze this progression, you will find that you have changed keys (modulated) three times, D Major into C Major into G Major. This is very important to the sound of this rhythm playing.

This progression introduces the Root 5 E minor barre chord. This shape is based on an open A minor.

The fill is played around Em-G Major Pentatonic Box Pattern number four. The remaining measures are similar to the other progressions. If you dissect this progression, you will find it has modulated from E minor to D Major to C Major to G Major. Understanding the theory behind chordal fills will aid in your composition and improvisation.

This is the chord progression from Sweet Surrender by Jeff Beck.

This is the progression for Wonderful Tonight by Eric Clapton. 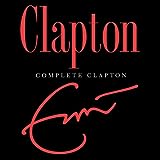 Complete Clapton (2007) is a 2-disc greatest hits collection that was released as a companion to Clapton: The Autobiography (with the same black and red cover). Other than his early days with The Yardbirds and John Mayall & The Bluesbreakers, Complete Clapton spans Eric's entire career, beginning with five songs from Cream and ending with Ride The River from 2006's The Road to Escondido with J.J. Cale.