Thelma Raker Coffone is an award winning writer who enjoys writing on a variety of topics, especially those honoring Veterans.

How Do You Rate this Movie?

Much Acclaimed Book and Movie

The book Bridges of Madison County by Robert James Waller appeared on the New York Times best-seller list in 1992 and spent 3 years on the prestigious list to mixed reviews. It is recognized as one of the best selling books of all time and is the basis of a 1995 movie by the same name.

It stands to reason that a movie based on a book with those credentials would stand on laurels of its own, especially with performers the caliber of Meryl Streep and Clint Eastwood in the starring roles. Eastwood, who not only performed in the movie but also served as Director and Producer, received numerous accolades. Streep was nominated for the 1995 Academy Award for Best Actress in a Leading Role. However, the award went to actress Susan Sarandon for her performance in Dead Man Walking.

The movie was highly successful and grossed over $182 million worldwide.

The story begins with the recent death of Francesca Johnson, an Iowa farmwife and mother of two adult children. Francesca's will includes a strange request of her children. Her final wishes are to have her remains cremated and her ashes scattered over the water under the Roseman covered bridge. Her children are puzzled until they discover a letter, some photos and Francesca's diary. They learn of a long ago love affair between their mother and a National Geographic photographer who spent 4 days in their town in 1965 while photographing the covered bridges of Madison county.

The movie then takes us back in time to the day Francesca's husband, Richard, left home with their two children to attend the Iowa State Fair. As Francesca was settling into her new found solitude, a truck pulled into her farmhouse yard driven by a man asking for directions to the Roseman bridge. This intrusion would forever change the lives of Francesca Johnson and Robert Kincaid.

Robert and Francesca Fall in Love

Over the course of the next few days, Robert and Francesca fall in love. The scenes leading up to the realization that they love each other are memorable. The chemistry between the two is evident in such simple ways such as when they clean vegetables together at the kitchen sink and how she gently straightens the collar of his shirt.

The photographer and the simple housewife dance together in the kitchen to soft jazz music without saying a word. The couple, as well as the audience, feel the anticipation of the passion that is yet to come.

The moments of silence between the two speak volumes. It allows the audience to read into Robert and Francesca's thoughts what they perceive them to be thinking. The woman who has experienced a straightforward and sheltered life on a farm is suddenly involved with a man who has been around the world and known many women.

The unhurried pace of these scenes and the subtle nuances draw the audience in and gives them time to understand the couple's blossoming feelings for each other. In a scene at Roseman bridge, Robert is taking pictures of the bridge, when he suddenly turns the camera and his attention to Francesca. The beautiful soft theme music begins to play and the two of them, as well as the viewers, know at that precise moment they are in love.

A TV Guide film reviewer criticized these romantic scenes by saying, "Little happens here apart from a long, slow buildup to sentimentalized coitus." Obviously, the millions of people who purchased the book and watched the movie did not agree with the critical reviews of the slow build up to a beautiful love story.

At the end of their four days together, it was time for Francesca to make a decision that would affect not only the two of them but her children and husband for the rest of their lives. The audience was hoping for her to hop in Robert's old truck and take off with him to parts unknown. However, she put her own feelings and desires aside and made the choice she felt was best for her family.

It was clear Robert knew her decision and would abide by it. While standing in the rain looking at her, he relayed that thought to Francesca with just a simple, slight nod of his head. They both understood.

As Robert's truck turned the corner to leave her and Madison county behind, it appeared she would run after him. But that was not to be. She let him go and they would never see each other again. However, they would remain in each other's hearts forever.

This kind of certainty comes but just once in a lifetime.

Memorable Moments in the Movie Bridges of Madison County

Do you think Francesca made the right decision to stay with her husband and children?

Tourism has become a major industry in Madison County, Iowa since it gained fame through the book and movie. Tours are available for many of the movie landmarks. Unfortunately, the farmhouse used to film Francesca's home suffered a fire due to arson and has been closed to tours.

Roseman bridge is one of six remaining covered bridges of the original nineteen in Madison county. It was built in 1883 and is rumored to be haunted. Tourists enjoy being photographed by the bridge, just like Meryl Streep and Clint Eastwood.

The bridges aren't the only claim to fame for Madison county. The town of Winterset, located in the county, was the birthplace of the late John Wayne, a popular American actor. More information is available at the birthplace website.

Author of Bridges of Madison County

Waller was an Iowa native who enjoyed photography and was a musician. He always maintained the book and the characters were fictional. However, the true to life settings where the movie was filmed and the similarities between Waller and the character of Robert Kincaid (both photographers and musicians) are obvious. They both shared the first name, Robert, and some have said there is a resemblance in their appearance as shown in the picture here of Waller wearing suspenders like Kincaid's. It makes you wonder if there may have been, in the author's memories, a real Iowa farm wife named Francesca. 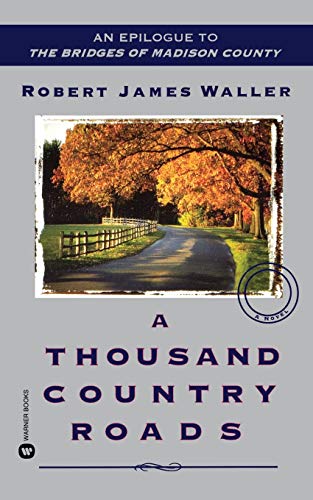 In 2002, Robert James Waller wrote another book called, A Thousand Country Roads. It is an epilogue to Bridges of Madison County and is said to be "the rest of the story".

Newscast on Iowa TV Station about the Filming of the Movie

Have you read the BOOK?

Have you seen the MOVIE?

Please Share Your Comments About the "Bridges of Madison County"