Brutality in Christian Music: An interview with Jake Martin of Taking the Head of Goliath

Taking the Head of Goliath

As the old scribe says, there is nothing new under the sun. The saying applies, especially to music. Twin Cities Brutal death metal band, Taking the Head of Goliath is not breaking new ground with their old school/new school sound, but they are a tremendous force of musical power and faith.

Vocalist Jake Martin took the time to answer some questions about music, faith, family and food. He may perform extreme music, but I found him to be down to earth and fairly normal. Check out the interview and then check out the new record. If you love extreme music, it will blow your mind.

Justin W Price: Can you give my readers a little background on Taking the head of Goliath? How and when did it form?

Jake Martin: We formed in April of 2015. It was just a freak thing really. I had made mention to a former drummer in a previous band I was in a decade earlier that if I ever started another death metal band it would be a band for God’s glory. Matt was down for that vision and recommended Nathan Sherman, the guitarist from a separate former band that he was in and the three of us jammed and Taking The Head Of Goliath was born.

JP: What are some of the various incarnations of the band, both personnel wise and in sound?

JM: Well, we were a three piece for quite some time and wrote the entire debut EP as such except for the cover of Crimson Thorn’s Unearthed. We added Luke Renno on bass when he volunteered to join the band via an online message. This was a true blessing and an addition my wife Anna and I had been praying for since the band started. We have never held auditions of members, we waited for The Lord to provide and God came through in a major way with the addition of Luke. As we were preparing to begin playing out live we brought in Rob Blake for a second guitarist. This is the line up on our Beyond Brutal Live EP and our debut studio album.

JP: What is the current lineup for Taking the head of Goliath?

JM: Shortly after recording the self titled EP we parted ways with Matt and replaced him with former Crimson Thorn drummer Steve Reishus. We also recently parted ways with Rob so the current line up is Nathan on guitars, Luke on bass, Steve on drums and myself on vocals. We feel very strong as a four piece but should God provide us another guitarist we would consider the addition of a second guitarist once again.

JP: How has the new record been received?

JM: It’s been extremely well received! It’s quite humbling to know our music is being enjoyed all around the world. We can’t wait to serve up the next installment of material with a full length follow-up record. We’ve got a few new songs under our belts but realistically the record probably won’t be out until 2020.

Taking the head of Goliath: "The Audacity to Inspire"

JP: Where do you see Taking the head of Goliath over the next decade?

JM: It’s honestly easier for me to imagine Christ returning in the next ten years than what the band will be doing then. Hopefully we’ll be in the presence of The King in the new Heavens and the new Earth.

JP: What are some of your musical and lyrical inspirations?

JM: We just try to write powerful music to bring glory to a powerful God. He is all the inspiration we need.

JP: Does Taking the head of Goliath have a specific message or underlying theme to their lyrics?

JM: Yes. I am the lyricist for the band and I write in a very personal way. I also write in a way I think other can relate to. All our lyrics point to Christ yet they do so in many ways. Some songs are born in struggle, some in praise, some are encouraging and some are lamenting the state of this fallen world.

JP: What is the songwriting process like for Taking the head of Goliath? Is there a primary song writer or is it a collaborative effort?

JM: Typically song start with a riff from Nathan and the guys build from there. Recently we’ve built off of ideas from Luke and drum patterns from Steve as well. So yes it’s an organic collaborative effort for the most part. More often than not we water a riff and watch it grow rather than having someone bring a full song to the table. Once the music has taken shape, I name the song, lock in my vocal delivery and write lyrics.

JP: If you could only mosh to one song for all of eternity, which song would it be and why?

JM: I’m not sure there will be moshing in heaven or not but I can’t wait to sing Holy, Holy, Holy for all of eternity!

JP: Does pineapple belong on pizza?

JM: This may be the most divisive question this world has ever known… In my humble opinion, pineapple on pizza is an abomination and a sign that the end is near indeed.

Taking the head of Goliath, Live at Audiofeed Festival

JP: What’s the meaning/story behind the band name?

JM: David believed God was in control and would keep His promise. The band name is just that, a term of faithfulness. So when we say, “we are Taking The Head Of Goliath”, we are saying, we believe and we are faithful. Bonus death metal points for the decapitation reference must also be noted.

JM: Minnesota has a massive metal scene! There is so much talent in the Twin Cities. We’ve been well received here by secular and Christian fans alike. We’ve had some great local shows including opening for For Today, War Of Ages and most recently Suffocation and Cattle Decapitation on their tour stops in Minneapolis/St. Paul.

JP: What are your desert island movies?

JM: If I was alone on a desert Island I’d want The Office series box set. I know it’s not a movie but it’s my wife and I’s favorite when we chill out to watch something. It would keep me entertained forever but would also be sentimental and remind me of her.

JP: Rich Mullins is one of my favorite Christian thinkers. How do you relate this quote to TTHOG?

JM: True. Jesus wants us to love God with all our hearts, minds and strength. We can’t hold the world to the standard He holds those to who claim Him as their Lord and Savior. We must shine a light into the darkness of this world and love the lost the way Christ would, gently and selflessly. We also must love His followers, our fellow believers the way He would, truthfully and boldly, particularly when addressing unrepentant sin and idols that separate us from a close, intimate and sanctifying relationship with Jesus. We just have to be sure we remove the log from our own eye before doing so.

JP: I hear a lot of old school death metal in your music: Cannibal Corpse, Suffocation, and early Decapitated, early Mortification. Who are your influences?

JM: All of the above. We are a new school old school death metal band if that makes sense. Personally, all my influence took place while I grew up with bands like these but to be completely honest, I don’t listen to secular death metal anymore, it just doesn’t sit right in my soul these days. Now a days I’m just influenced by the amazing musicians God has given me as band mates.

JP: What are some of your favorite spots in the Twin Cities?

JP: If you weren’t in a metal band, what kind of music would you be making?

JM: Just anonymously singing along with the congregation at church.

JP: How often do you guys perform?

JM: We like to play a few Festivals in the summer and a few local openers if some killer bands come through town. So just a handful really. Last month we did do our first little tour with our brothers in A Hill To Die Upon, Death Requisite and Abated Mass Of Flesh. It was just three dates in KC, Little Rock and Dallas. It was a ton of fun though and we hope to get out on something like that once a year or so too. Fact of the matter is faith, family and work comes first for us. The band is like priority #5 for me. That not to say I don’t give it my all, my wife and kids just take precedent.

JP: Do you have any advice to young musicians out there about how to handle yourself in the industry, specifically those playing extreme metal?

JM: Don’t expect anyone to do the work for you. Don’t think you’re entitled to anything. Your listener is more important than you are, treat them as such. Enjoy every moment, if you’re not having fun, find something else to do with your time and your talents. Build relationships and appreciate them whether or not they can do anything for you or your band. Love people. The TTHOG ethos is to make friends not fans and that’s what is all about. This is metal, success is not measured in dollar signs, it’s measured in memories.

JP: What is your favorite food?

JM: My go to meal is a big fat medium rare ribeye steak with sautéed onions, fried potatoes and asparagus. I’ll knock down a few glasses of ice cold milk with that and some cheesecake for dessert and I’m golden.

Taking the head of Goliath, "Oblivious to oblivion" 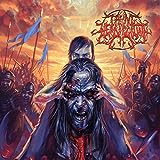 JP: What are your hobbies, outside of music?

JM: My wife and I are big MMA fans and rarely miss a UFC fight. We also enjoy target shooting when we get the chance. We also have two daughters, 13 and 10, so their hobbies are our hobbies too. Artwork and movie nights are big in the Martin household.

JP: There are hundreds of bands around the world. What makes you guys different and special?

JM: Music is so subjective, this is a really tough question to digest… We make music we enjoy and we hope others enjoy it too. If you enjoy the music definitely come out to a show. We’re true to who we are on and off stage and we’re true to the music we create as well. Does that make us different or special, I don’t really know, but I assure you, if you love brutal death metal, you’ll have a good time at our show.

JP: Where can folks purchase your music and keep up to date on upcoming shows and events?

JM: Facebook is the best place to keep up to date and interact with the TTHOG camp. We’re also on most major social media sites and have tunes on most major music streaming services as well. Merch and physical copies of the record can be purchased directly through the band at our online store here.

JP: Is there anything else you would like to add?

JM: On behalf of all the guys I’d just like to say thank you for your support of Taking The Head Of Goliath. God bless!