Bud Powell: The Tragedy of the Legendary Bebop Jazz Pianist

Bud Powell (1924-1966), was one of the innovators of bebop jazz, along with Dizzy Gillespie and Charlie Parker. Recognized as a brilliant genius of the piano, he was highly influential to generations to follow and is still cited to this day as being a main influence on many musicians, including non pianists.

Bud Powell, along with Thelonius Monk is often thought of as the first great innovator of the modern jazz piano styles. Unfortunately, his relatively short life was plagued by mental illness, drug addiction and tuberculosis.

Powell grew up in Harlem as a mathematically as well as musically talented child prodigy. By the time he was seven, local musicians would take him with them so people could hear him play, and, in his teens met jazz pianist/innovator Thelonius Monk who became a friend and mentor.

While still in his late teens Powell got a gig playing with trumpeter Cootie Williams. While in Cootie’s band, at the age of 21, he received a severe beating from a policeman when he tried to stop him from harrasing Monk. This attack was thought to have contributed to his severe mental problems that plagued him for the majority of his career.

It is estimated that the treatments he received in mental institutions, would eventually consume nearly a quarter of his life. Considering he was 42 when he died means that approximately half of his professional career was spent in these institutions. Despite all of all of these problems Powell recorded many astounding performances and played and/or recorded with many of the jazz greats of the day.

In fact, he was the guy to hire (when he wasn’t incarcerated or institutionalized, or on drugs or alcohol) for any type of bebop recording session or gig because of his amazing technical and creative ability.

One thing that made his piano playing unique was the comping style. Similar in the way Count Basie had begun the to lighten up his left hand comping style behind soloists years earlier, Bud Powell had done the same to accompany his own improvisations.

Whereas pianists of previous generations tended towards a heavier left hand style of accompaniment and less syncopated rhythms, Bud developed sparse, syncopated comping patterns beneath his own solo lines with sporadically placed two and three note chords that implied the harmony.

This approach has since then become the standard of bop piano playing. As well, Powell had great speed and agility and was completely at ease playing the complex, angular bop lines that Charlie Parker and Dizzy Gillespie were pioneering in the beginning stages of bebop and probably had a hand in the invention, or at least in the refinement of some of that vocabulary.

He also started using more complex harmony in some of his compositions, probably as a direct result of being influenced by Charlie Parker’s explorations of the upper extensions of chords. It has often been quoted that “Bud Powell did for piano what Charlie Parker did for alto saxophone.”

Powell’s first albums in 1946-47 displayed virtuoso performances that eclipsed any previous modern jazz piano recordings. In 1949 he recorded for Blue Note and Clef at which time he had already spent considerable time institutionalized. His mid-1950s work was uneven, and interrupted by more spells in institutions, as well as problems caused by his intolerance to drugs and alcohol.

After many lengthy stays in various facilities and despite his declining memory, health and abilities due to the treatments he received in these places (which besides heavy doses of powerful drugs also included electroshock therapy), he moved to France. From 1959 to 1964 he resided there and became a Paris legend performing with a trio known as “Le Trois Patrons” (The Three Bosses).

The band consisted of American drummer Kenny Clarke and French bassist Pierre Michelot and was quite popular and successful. He was befriended by Francis Paudras a Frenchman who looked out for Bud for three years in Paris.

Paudras discovered that Powell’s girlfriend was slipping him pills everyday. This pill turned out to be Largactil, a powerful tranquilizer commonly known as Thorazine and also as the “chemical lobotomy” or “chemical straitjacket.” When mixed with alcohol, it causes “dangerous over sedation.” “It can also cause agitation, drowsiness, and tardive dyskinesia, a condition characterized by involuntary movements of the tongue, face, mouth, and chewing movements.”

Despite all of this as well as the tuberculosis that put him in a French hospital for a year, Powell still performed as often as he could and, on a good night according to witnesses, was as brilliant as he ever was. He moved back to the States in 1965 where his health declined rapidly. He died on August 1, 1966 from a combination of liver failure, TB and malnutrition. 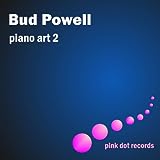