Hard-Hitting Truths in the Music of Casting Crowns

We've all heard the saying, the truth hurts. This can be true even for Christians.

Our Christian lives are not just about attending church on Sundays and throwing up a prayer to God every now and then. It's about much more than that - it's about loving people who are broken. It's about sharing our faith in a dying world. It's about living what we preach. A real Christian's life includes struggles, heartache and sometimes trouble on every side. The Lord told us in His word to not be surprised when we are faced with such trials.

Casting Crowns is a band whose music encompasses all that a Christian life should be. Their music deals with the simple and complex truths of having a relationship with Jesus. Many have testified that this Grammy-award winning band's music has spoken to their hearts on more than one occasion.

Their music really makes its listeners think about their faith. Are we living a life of complacency or are we doing what the Lord is calling us to do? How giving are we, really? How honest? How judgmental? Do we even care about the dying world around us? The lost souls? Do we engage in spiritual warfare against the enemy?

The music of Casting Crowns forces its listeners to ask these kinds of tough questions, to seek the truth, to want to love others just a little bit more. Their music is convicting, though not condemning. Below are some of my favorite songs from this amazing band that deal with the reality we as Christians should be facing everyday.

If We are the Body

This is the song that started it all for Casting Crowns back in 2003 with the release of their first non-independent album, Casting Crowns. The song basically conveys honest truths about what Christians should be doing and aren't.

Some other great songs from this album include:

American Dream - This song conveys the truth about fathers who work too much and don't take time for their family.

Here I Go Again - This song conveys the truth about what a struggle it can be for someone to tell their friend about Jesus.

What if His People Prayed? - This song conveys the truth about what our lives on this earth could really be like if all of us Christians prayed as we are commanded to do. The song is based on the scripture from 2 Chronicles 7:14 which states, "if My people who are called by my name will humble themselves and pray and seek My face, and turn from their wicked ways, then I will hear from heaven, and will forgive their sin and heal their land.

Some of the lyrics: And what would happen if we prayed for those raised up to lead the way, then maybe kids in school could pray and unborn children see the light of day...What if the life that we pursue came from a hunger for the truth, what if the family turned to Jesus instead of asking Oprah what to do...

What if His People Prayed by Casting Crowns

Does Anybody Hear Her?

This song can be found on the band's sophomore album, Lifesong. Casting Crowns won their first Grammy award for work on this album.

Besides the song Praise You in the Storm, another successful release on the album was "Does Anybody Hear Her?" The song conveyed the hard truth about how Christians can be so judgmental and are not willing to talk to those who appear to be less than we are.

Some of the lyrics: She is running a hundred miles an hour in the wrong direction...If judgement looms under every steeple, If lofty glances from lofty people can't see past her scarlet letter and we never even met her.

More songs of truth from the album, "Lifesong"

Stained Glass Masquerade - This song conveys the truth about being in a church where everyone pretends they are living the perfect Christian life and don't have any problems at all.

Set Me Free - This song conveys the truth about the enemy and his demons trying to keep us from living out our faith.

While You were Sleeping - This song conveys the truth about missing Jesus when He was and will be right in front of our eyes.

Some of the lyrics: United States of America looks like another silent night as we're sung to sleep by philosophies that save the trees and kill the children.

Set Me Free by Casting Crowns

On the inside cover of this CD, Casting Crowns writes, "This is where we all live as believers - somewhere between the altar and the door." To me, this means it can be so easy to be caught up in the moment of church and promising God we will be faithful to Him and live a life pleasing to Him. But as soon as we hit the door, everything changes as were are faced with the temptations of the world, bad habits and people who aren't a good influence.

One song in particular from this album that is especially hard-hitting is Slow Fade. It's basically a song warning us to guard our hearts be careful about what we allow ourselves to hear and see.

Some other songs from this album include:

What This World Needs - This song conveys the truth about the need for our Savior, the need for God to change our hearts and the need to be different than the world.

Every Man - This song conveys the truth about the people we could influence and encourage if we simply told them about the love and forgiveness of Jesus Christ. 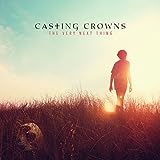 The Very Next Thing
Buy Now

Until the Whole World Hears

If there is one song that sums up the entire career of the band, I would have to say it is this song, "Until the Whole World Hears." The band is passionate about spreading the gospel to all the ends of the earth, even where Christians are persecuted. In 2009 they were one of the only American bands invited to North Korea to attend the April Spring Arts Festival in Pyongyang.

This song gives the truthful message of the gospel and how it should be in all of our hearts as Christians to make sure the whole world hears it.

Some of the lyrics: Lord, let your sleeping giant rise, Catch the demons by surprise
Holy nation sanctified, Let this be our battle cry

More of the band's recent truth-filled songs include:

Glorious Day (Living He Loved Me) - This song conveys the simple truth how Jesus died to save us and forgive our sins and that one day as believers, He will come back for all who are saved.

Courageous - This song conveys the truth about how men need to take a stand and lead the way for their families.

Thrive - This fun song conveys the truth that we can't give up on life because we were made to thrive.

Broken Together - A song that forces married couples to face the truths of how difficult marriage can be, especially because of unmet expectations before getting married.