Classic Cartoons From the 90's: 'Heroes On Hot Wheels'.

That nostalgic feeling of growing up during the 80's and early 90's is something that I think about frequently, even in my adult life. At times, I feel blessed that I grew up during this era - an era when reality television wasn't the norm as it appears to be now. An era when we as kids woke up early on Saturday mornings to watch our favorite cartoons. An era where kids played outside most of the day during the summers, rather than spend the entire day propped at a desk looking at a computer screen like so many kids do today.

There are so many cartoons that I remember watching during my childhood. There were some that were more popular than others, however, many of them captured the then young kids (like myself) back then hearts. Ironically, one of the lesser talked about cartoons from the early 90's was marketed by easily one of the most popular toy lines in American history; Mattel's, 'Hot Wheels'. The cartoon was titled 'Heroes On Hot Wheels', and was a pretty fitting title for the cartoon in my opinion.

I sometimes spend my nights doing research on various interests that I have both now, and back then during my youth. After doing some research on 'Heroes On Hot Wheels' recently, I discovered a few things about this cartoon that I obviously wouldn't know back in my pre- Internet days. Since I'm planning on writing articles on 80's-90's television shows more frequently, I figured now would be a good time to bring some of those findings on Heroes On Hot Wheels to fruition. For those of you who maybe up in another generation and maybe wasn't familiar with 'Heroes On Hot Wheels', I'm hoping that I can bring some new knowledge to your attention. My research on this cartoon surely did that for me.

Synopsis of 'Heroes On Hot Wheels'.

'Heroes On Hot Wheels' was a cartoon that made it's U.S. debut in the year 1990. The show was produced by Jetlag Productions, and aired on the television network 'The Family Channel' - which today is known as the 'ABC Family' network. The show followed the Valiant Racing team, and their travels around the world looking for racing adventures. The show was centered around mainly around is lead character, Michael Valiant.

'The Leader' was the show's main villain. He is the owner of Team Leader, which is a rival racing team that uses advanced and high technology to compete against team Valiant. 'The Leader' recruits dangerous drivers that often resort to illegal and aggressive ways of driving to foil team Valiant from winning. The Leader's sole and only purpose is completely control and dominate the racing industry. Now that I've tried to paint a brief picture of what 'Heroes On Hot Wheels' is about, lets get into the newer things I learned while doing some research on this cartoon.

In 1967, a French broadcast titled 'Les Aventures de Michel Vailliant' made it's television debut. Adapted from the comic book series 'Michel Vaillant', this series was a live action adaption that ran for 13 episodes. Although it was based on the aforementioned comic series, the stories were featured around real life driver Hendri Grandsire, who drove in the World Sportscar Championship. Grandsire drove an Alpine A110 race car, and acted as himself in various interludes on the show.

Later, the animated series titled 'Michel Vaillant' - which would become what 'Heroes On Hot Wheels' is based on, made it's debut in 1988. The cartoon entailed 65 total episodes that ran for 26 minutes. Like it's predecessors, 'Michel Vaillant' was also a French production, and was produced by La Cinq - which was France's first privately owned free television network. The U.S. version that we've come to know as 'Heroes On Hot Wheels' was adapted entirely off the French series. Not only was the title changed to appeal to an American audience, but the lead character Michel Vaillant's name was changed to what we in America know as Michael Valiant. A live action movie based on the series titled 'Michel Vaillant' was released in 2003.

As you can no doubt tell, my research on 'Heroes On Hot Wheels' managed to bring quite a few surprises. What I originally thought to be an American cartoon series from the 90's, was actually a French born series that goes back to the 50's. I also never realized how popular of a character that Michel Vaillant really is. Of course he was likable on the cartoon, but the series itself has been an influence in real life auto racing as well. Several famous drivers have admitted that their passion for auto racing came from reading the Michel Vaillant comic book series.

In June 2012, Swiss driver Alain Menu participated in the World Touring Car Championship of Portugal using a Vaillante theme. Menu even won a race using the name M. Vaillant, and also shaved and dyed his hair to give himself the look of the iconic comic book character. Several real life cars have also been adapted from car designs the series. Vaillante, which is a fictional French company featured in the Michel Vaillant series, has been featured in real life race cars - as well as various car models.

I had no idea how far back, nor how popular this series was. Heroes On Hot Wheels will always remain one of my favorite and most memorable cartoons from the 90's. Since this cartoon came on during the day when I was growing up, I'll admit that I sometimes got myself out of school early in the fourth grade just so I could watch it. Pretty sad huh? However, I loved when the summer came around, because I didn't need any excuses to tune in.

For those of you looking for some of that nostalgia from the early 90's, episodes of 'Heroes On Hot Wheels' can now be seen on Youtube. Or, if you're not familiar with Heroes On Hot Wheels and consider yourself a big kid at heart (obviously like I am), the episodes are there for you to check out.

Did you watch 'Heroes On Hot Wheels' while growing up? 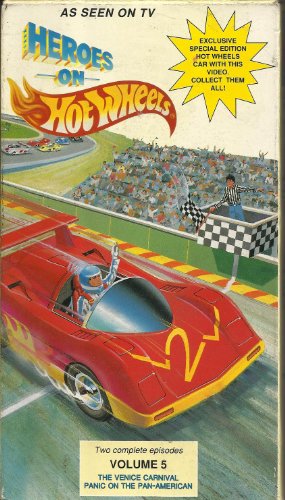 Heroes On Hotwheels: The Venice Carnival / Panic On The Pan-American
Buy Now