Whales became the focus of the endangered animal movement of the 1970s, just after the first Earth Day was declared and books such as The Greening of America (about money, waste, and greed), and other warnings against misusing resources gained momentum in the media.

In 1851, Moby Dick featured a white whale as the object and symbol of a man's obsession with revenge upon his environment. Sometime before 1700, Canadian First Nations and Pacific Northwest Native Americans created masks and totem poles to depict the whale (and other animals) and its related stories in tribal creation myths and their current lives. The whale is a mighty symbol.

Moby Dick, the epic tale of the Great White Whale and Captain Ahab's obsession with it's capture and demise, is not likely a film one can watch every day. It is complex, heavy with symbol and meaning, and can be tiring in any of its remakes. Its themes contain material about politics, racism, religion and belief, and class differences and injustices in society.

One 20th century remake with Patrick Stewart (Picard, Star Trek, The Next Generation) as Ahab is quite good, reminding me of Ahab's final words spit with venom in the dying breath of Kahn Noonien Singh (Ricardo Montalban) in Star Trek: The Wrath of Kahn.

Star Trek® has hired many Shakespearean and classic actors in its 45-year run as of 2011, and it seems some of its stars are connected with whales. The Wrath of Kahn, in which Kahn was Ahab and Captain Kirk was Moby Dick, led soon to The Voyage Home, in which a pair of whales, George and Grace, were transported from the 20th C., where they were endangered, to the 23rd century, where they were extinct.

A powerful, attacking alien society wished to communicate only with whales in order to assure that the planet was worthy of continuance. George and Gracie presumably repopulated the oceans with humpback whales to save the planet long term. The Whale in Symbology

The song of whales sound often like the trumpeting of elephants underwater and both animals have been said to represent wisdom, intelligence, and even kindness in one culture or another.

We now know that elephants and whales both have complex languages and seem to be sentient (see links below). Whales have passed down tunes through their own generations, including tunes heard in the belly of slave ships tightly packed with Africans as they crossed the Atlantic during the earliest days of the slave trade. Perhaps the whales thought the ships were larger whales, singing.

Regardless, in the latter 20th century, scientists discovered humpback whales in the Atlantic singing the tune to a former African song, now used for Amazing Grace. Further study revealed how whales passed song to their young, like aboriginal human oral traditions -- Interestingly, some groups call the whale "a record keeper for eternity."

Scientists now understand how songs are passed from creature to creature over the distance of vast ocean basins and give each of the 11 populations of humpbacks around the world a unique song.

Based on all this, I cannot watch Moby Dick every day, but I can watch The Voyage Home every day. it is Alice in Wonderland with spaceships and whales; and at one point, Kirk calls the whale curator "Alice" after she first experiences the Transporter Effect - rather like passing through the mirror.

The message of "The Voyage Home" is that neglectfully allowing a species of whale to become extinct endangered every living thing on Earth.

Humor and Whales in Science Fiction

To a new viewer, The Voyage Home unexpectedly contains footage of one of the most entertaining comedy skits on film, acted by veteran black-hat western character DeForrest Kelley and Canadian voice and character actor James Doohan. Moreover, the film is full of comedy. Under the direction of Leonard Nimoy, many of the scenes inspire laughter.

Captain Spock's attempts at using 20th century epithets (parodied in the more recent film Paul) grow more hilarious by the dozen, until he final gets it right on the way back to the 23rd century with a cargo of whales. Spock and Kirk's objections to overly loud punk music from a boom box on a San Francisco bus is also funny, but not for the face-pierced grunge that falls under the classic Nerve Pinch. The passengers applaud.

Spock's references to 1980s pulp writers as the giants of current literature is also funny. Chekov's arrest and questioning as a Russian spy in 1986 is hilarious. When Pavel is injured, McCoy and the Enterprise crew take over a hospital wing, growing new organs with pills, criticizing 1980s medicine as barbaric, and creating havoc.

As with many effective comedy actos, Kelley and Doohan mastered comedy later in life and career. Other actors in this category include Leslie Neilson and Lloyd Bridges as well as Darren McGavin. These men began acting in science fiction and adventure films and series like This Planet Earth; Sea Hunt; Riverboat and Kolchak:Night Stalker. They went on to make us laugh in the Naked Gun film series, the Airplane comedy films, and the annual favorite, A Christmas Story.

All of the actors in this paragraph are now deceased and film footage is the only way to visit them again. Kelley and Doohan as professor-engineers from Scotland with advanced technologies no one in the US has seen are sublime. Their opinions of "quaint" pre-Internet computers in 1986 are both disgusted and funny - all the more comic after the public gained wide Internet access in the mid-1990s. Viewing these scenes becomes funnier every year.

The Monterey Bay Aquarium was used as the Cetacean Institute for Star Trek: The Voyage Home. The aquarium has expending their programming since that time and has become a popular tourist and local visitor attraction.

In addition, the organization dedicates a large portion of its efforts to conservation and sustainability with a system of programs called Save the Oceans on their website. One of these is a smart-phone app for choosing ocean-friendly seafood restaurants.

The aquarium promotes official marine protected areas (like national parks under the sea) and sponsors conservation legislation such as the sustainable seafood bill AB 1217, passed and signed into law.

Now, California fisheries can receive help in gaining international certification for seafood sustainability and market their products as sustainable.

Whales Weep Not, Quoted in Star Trek, the Voyage Home 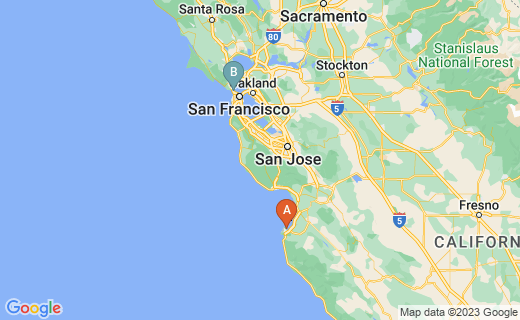