Pamela is a professional musician and private music instructor for over 3 decades. She is constantly researching aspects of music education.

Kuhlau was born on September 11, 1786 in Ulzen, Germany to an average family. Since his grandfather, father, and uncle were all musically talented on the oboe, they recognized his musical talents and scraped together funds in order for him to take lessons on the piano. Little else is known about his youth except that he lost his right eye due to a falling accident on ice at the age of seven.

He lived in Germany until Napoleon's forces took control of Hamburg in 1810. At that time, Friedrich was able to leave the country and move to Copenhagen, Denmark where he performed on piano and composed new works. By 1813, Friedrich became a Danish citizen since he was to live there for most of the rest of his life. Within a few years time he earned the rights to perform and become the choral master at the Royal Theatre. He was awarded a position as a court chamber musician during his stay in Denmark. The position of honorary professor was given him in 1828. During the mid 1820's, his friendship with Ludwig Beethoven allowed him to travel back to Vienna to work with the famed composer. He was responsible for introducing Beethoven's music to the people of Denmark and many times imitated Ludwig's style in his own compositions.

Although Kuhlau composed music for many mediums and forms, his most famous are piano pieces. His sonatas are still frequently used as repertoire for teaching piano. He also composed many works for voice. Although Mr. Kuhlau was not a flutist, he became one of the most noted flute composers of his time period. Some referred to him as "the Beethoven of the flute". (Wikipedia) His flute pieces include flute solos, flute with piano, flute duets, trios, and groups, and chamber ensembles which included flute.

There are over 200 known published works by this gentleman. He had composed many more unpublished pieces that were unfortunately lost in a fire which destroyed his house. It is thought that this fire caused smoke inhalation and illness to Mr. Kuhlau leading to his death on March 12, 1832 in Lyngby, Denmark.

Free Kuhlau Sheet Music for You! 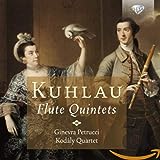 Flute Quintets
Enjoy these three quintets for flute, violin, 2 violas, and cello written by Mr. Kuhlau. Ginevra Petrucci, flutist, performs the quintets with the string players for almost an hour and a half of beautiful music.
Buy Now

Inspired to play some yourself?

Three Grand Duos, Op. 39 (Kalmus Edition)
Three Grand Duos, Opus 39 is one of my most favorite pieces to play perform on flute! My teacher years ago introduced it to me as a study piece since it involves many scales, arpeggios, and other technical aspects. She always said she preferred to give students Kuhlau pieces instead of the typical "etudes" as they require numerous technical skills, but also allow the player to develop their expression abilities. Plus, they are beautiful and fun to play (especially as a duet or chamber ensemble)! Since then, I have assigned many a Kuhlau duet to my students who have enjoyed adding them to their repertoire of most loved pieces. They have performed them and even used them for high level auditions. Some of my other favorites are Opus 87 for two flutes and Opus 119 for two flutes and piano.
Buy Now

So, why would I write a page about Mr. Kuhlau's music? I'm a musician who is interested in many styles of music. I have played and performed many of Kuhlau's flute pieces. They are beautiful to listen to and fun to play. Many of the duets and other forms have "equal" parts for the two flutes meaning both 1st and 2nd parts contain sections of the solo melody and the harmony. From a teaching standpoint, I like them because they contain many scales and arpeggios which I like my students to frequently work on. (It's much more fun working on them via a song though instead of an etude book!) The flute pieces give players the full range of notes of the flutes, dynamics, and articulations. Most of my students have enjoyed playing and performing these awesome pieces of flute music. Sometimes they are a little worried when they play one for the first time. ("Mrs J, there are a lot of notes on that page!"), but they usually ask to play other ones once they master the first one!

I hope you have enjoyed listening to this gorgeous music from the videos, learning a bit about Mr. Kuhlau, and finding free music to play!! Thanks for visiting!