"KEEP BLASTIN', CHEWIE! THOSE THINGS WILL EAT THROUGH THE FALCON FOR DINNER -- AND US FOR DESSERT!"

-- Wow! How could any self respecting nine year old possibly resist the alluring, action packed cover to Marvel's STAR WARS #28, with its image of the heroic Han Solo and the hulking Chewbacca standing side by side, blasting away at an armada of creepy-crawling insects bent on devouring their beloved Millennium Falcon? "CAVERN OF THE CRAWLING DEATH!" screamed the cover blurb, though the title of the actual story inside is "Whatever Happened to Jabba The Hut?" - a unique tale that has served to cause fits amongst Star Wars continuity geeks for more than 30 years.

As issue #28 opens, Han and Chewie are trapped in a cave on a particularly inhospitable planet called Orleon, pinned down by a team of space pirates who work for Jabba the Hut (sic). Star Wars geeks will recall that in the first film, Han owed Jabba a large amount of money, so he and Chewie spent a good amount of time in the early Marvel issues racing around space, barely staying one step ahead of Jabba's crew of bounty hunters while trying to come up with enough cash to repay the debt.

What makes this particular issue interesting is that "Jabba the Hut" (note that it was spelled with only one "t" at the time) makes one of his first appearances in Marvel continuity here, and he bears absolutely no resemblance to the gigantic, slimy, slug-like creature that was introduced in 1983's "Return of the Jedi." Marvel's 1979 model Jabba is a humanoid looking alien with yellow skin, an ape-like face and cool sideburns, and he speaks Galactic Standard (English) rather than the guttural Hutt-ese lingo that moviegoers are now familiar with.

The reason for the Tale of Two Hutts is simple: Jabba was supposed to have a bit part in the original "Star Wars," but the scene in which he appeared ended up on the cutting room floor due to time and budget restraints (it was eventually restored and put into its proper place in the movie when Lucas released his "Special Edition" of the first film in 1997). Jabba also appeared in the novelization of the film, so Marvel used the character in their comics even though nobody at the time knew what he looked like. It remains unclear whether the look of Marvel's "Jabba" was based on materials given to them by LucasFilm, or if they just took a wild guess. (If I had to bet money, I'd go with the latter.) 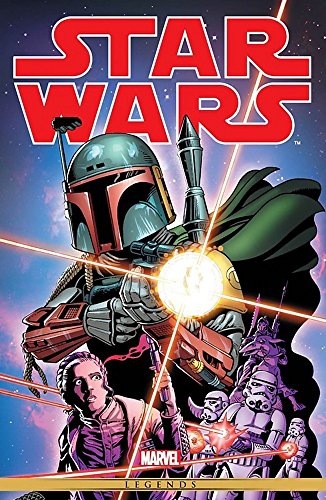 Anyway "Jabba" and his crew have Han and Chewie pinned down on the desolate, stormy planetoid, and the Millennium Falcon needs vital repairs (as usual) before Han and Chewie can make a getaway. As fate would have it, the cave they're hiding out in happens to be infested with "Stone Mites," scorpion-like alien insects (created during the Clone Wars as a biological weapon) that eat rocks -- and metal. So now Han and Chewie have a double conundrum - they need to get the Falcon fixed before Jabba's men make their way into the cave, and also before the Stone Mites swarm onto the ship and eat it out from under them.

Han and Chewie spend much of the intervening pages blasting away at hordes of Stone Mites while Jabba's pirates prepare to mount their final assault. Han and Chewie finally get the Falcon more or less operational and are able to blast their way out of the cave... only to meet up with Jabba's personal ship, the "Voidraker," once they get out into open space. In a twist ending, Jabba ends up pleading over the radio to Solo for help because his ship is now infested with the ravenous Stone Mites, which were inadvertently brought on board by his men in some of their equipment. "I'm the last one left, Han! You've got to take me aboard!" the crime lord pleads, and Solo relents... under the condition, of course, that Jabba cancel the debt that Han owes to him, removes the price from his and Chewie's heads, and includes a "bonus for our time and trouble...y'know, opening the airlocks and the like."

The issue ends with Jabba in a space suit, clinging to the side of the Falcon, where he "mentally calculates an offer, automatically cuts it in half, then decides to wait an hour to make it look good... and begins planning for another day when he'll have the upper hand."

After adapting the first "Star Wars" film in the first six issues of Marvel's monthly comic (which was reprinted in a dizzying array of Super Specials, Giant Size Super Specials, paperbacks, and other deluxe formats), a rotating cast of artists & writers continued the adventures of the film's heroes in all new original stories.

By issue #28, scripter Roy Thomas had left the Star Wars book, citing unreasonable restraints handed down by LucasFilm on what he could and couldn't do with the characters. His replacement was Archie Goodwin, whilst the art chores were being handled by comics legend Carmine Infantino and Bob Wiacek.

Infantino, best known for his work on DC's "Flash" in the 60s, never seemed like the right choice for a Star Wars artist; his semi-cartoony style was fine for super hero work, but his renditions of the nuts-and-bolts Star Wars universe always seemed, shall we say, "odd." (His versions of Chewbacca and Darth Vader in particular are quite goofy looking, and always made me wonder if Carmine had ever seen the movie, or at least glanced at a model sheet.)

Fortunately, Goodwin's stories were usually enjoyable enough to make Infantino's awkward art tolerable, and "Whatever Happened to Jabba the Hut?" is one of the better tales from the early run of Marvel's comic. It was well worth the 40 cent cover price (!) I paid in 1979 and still holds up pretty well today.

Marvel's Star Wars comics series was the most successful licensed title in the history of the company, publishing 107 issues (and several Annuals) between 1977 and 1986. Many credit the title for saving Marvel's financial hindquarters in the late '70s, when the company was on the verge of bankruptcy.

I will leave it up to the hardcore Star Wars geeks to decide if the "Jabba" in this story was an impersonator, a clone, an android, or whether this story can be considered "canon" in any way. All I know is that it's a fun read and that a back issue copy in decent condition will set you back approximately twenty bucks today. Happy hunting.