This Movie Review is the Brain Child of so many different personalities!!!

Those of you who have just gotten out of Stuber and can't gouge your eyes out fast enough, Taylor Swift says you need to calm down because Crawl is playing in a theater right next to Stuber, and you don’t even need to call an Uber to get to it.

Crawl is, by far, the best movie opening this weekend. It’s not even close. You can only see Far From Home so many times.

Crawl is the latest horror movie by French director Alexandre Aja (Mirrors, The Hills Have Eyes), a founding member of the Splat Pack. Because of his Piranha 3D from 2010, I no longer have trouble spelling “piranha” because throughout my life I always confused where the ‘h’ and the ‘n’ should go. It has cost me many a job interview.

In 2003, he directed the girls-with-chainsaws High Tension, which remains one of my all-time favorite horror movies despite the ending making no logical sense.

As you’ve just read, I like Aja because when I watch one of his movies, I’m not just watching entertainment, I’m learning something as well.

What did I learn from Crawl?

Without spoiling anything, I learned exactly what to do if a gator or pair of gators or even a group of gators were to attack. Had I known these techniques before, my nephew Mortimer would still be alive today.

Alligators attack a young woman and her father during a hurricane.

What? That’s not enough for you? You’ve seen the trailer. Crawl is not a high-concept movie with an overly complicated plot. I mean, there are alligators in the movie. Do you even give a croc about plot?

Well, there is a word count I technically have to adhere to.

Let’s do this again since I just know a padded, I mean, detailed plot synopsis is really what you need to decide if you’re going to see the killer alligator movie. Maybe after the movie you’ll go to a French restaurant with Alexandre Aja and order French food because you’re so condescending like my nephew Mortimer. Maybe that’s why I fed him to the alligators.

Crawl opens in the state of Florida, so you already know it’s a horror movie.

We meet our heroine Haley (Kaya Scoledario, not related to your sister’s friend Jenna Scoledario although they do look alike if you put their pictures side by side). She’s at swim practice at her local college. It looks like she’s finished in second or third place. We’re not sure where she placed but what we are sure of is that Haley is not good at swimming. We hope it’s not because of some deep-seeded psychological reason. We’re glad this will not come into play later if she has to swim in inclement weather. So far, the forecast is clear and cloudless on this wonderful Florida day.

It’s all over the news but Haley has been too preoccupied with swim practice to notice: There’s a Category 5 hurricane about to hit the area where Haley’s dad lives.

Haley still doesn’t know this but thank goodness her sister Beth has been trying to call and text her. Haley finds out from Beth that there’s a Category 5 hurricane about to hit the area where Haley’s dad Dave lives.

For those of you not meteorologists, a Category 5 is a pretty big hurricane. Bigger than a Category 4.

You see, Beth and Haley’s parents have just gotten divorced. Daddy Dave’s been tooling around a big and lonely house ever since mom left to go to Paris. Beth has been calling dad to see if he’s evacuated the house, but there’s been no answer.

Beth asks Haley to look in on dad.

Haley drives into the burgeoning storm to look for their wayward, newly divorced father. How could he not know there’s a Category 5 hurricane on the way? It’s been all over the news. A Category 5 is so much worse than a Category 3. Everyone knows this.

Haley ignores this warning and drives toward the house. Ex-boyfriend cop pulls out his gun and shoots at Haley, accidentally killing another motorist who was just trying to lawfully evacuate.

Haley arrives at the family home and doesn’t find dad. She does find the family dog Sugar (Tilda Swinton). Sugar (Natalie Portman) is a sweet old girl and wouldn’t hurt anybody.

We would like to wish Sugar (Don Cheadle) RIP at this time. You were a very loved dog.

Haley is now officially worried as to where her father is.

What is it girl? Is it dad?

Haley goes down the basement. Her father (Barry Pepper) is there, but he’s unconscious.

Of all the darn luck. This is the worst time to be unconscious in basement that’s about to be flooded because of the (say it with me) Category 5 hurricane. It’s not as bad as a Category 14, though.

Also, there is a huge alligator in the basement. I’m sorry, did I say a single alligator? I meant 2.

Nope. There’s more than that. A lot more. I feel bad for anybody who recently didn’t place first in any local swim meets.

Also, the local florist has a discount on any wreaths or flower arrangements you’d like to get for Sugar (Greta Gerwig) since she’s just waiting for death in this alligator-infested Category 5 hurricane. While supplies last or until the building gets flooded.

What Works With Crawl

What Doesn't Work With Crawl

Drive, not crawl, to see Crawl. The best killer alligator movie of the year. Even better than Poms.

What’s Your Favorite Way to Avoid Being Eaten by a Killer Alligator? 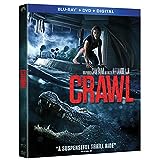