Cast iron skillets have become kind of iconic. In this era of Teflon-coated cookware and molded nylon spatulas and other stuff made of chemicals that end in on, the cast iron skillet evokes a simpler time, when you could cook bacon, eggs, and beans for breakfast in the same darn pan, and eat 'em in peace without some well-meaning busybody warning you about the dangers of cholesterol. I use cast iron to cook with all the time, and find it better than all those fancy newfangled so-called nonstick surfaces any day of the week. But maybe you’re not into fried foods, or perhaps you have a hard time picking up the darn things (they are pretty heavy, especially when they’re full of delicious sausage gravy). You can keep your cast iron cookware around, and not just for decoration on the kitchen wall to create "that country atmosphere." For some reason, "that country atmosphere" also seems to require more gingham plaid than I can stomach in one sitting, as well as cutesy relief carvings of farm animals doing human things, and hand-painted signs that say stuff like “bless this mess.” Ew.

No, what you’ll find here is a list of completely utilitarian ways that you can justify keeping that cast iron skillet in your home.

Plop a 9” (or larger) skillet down on the floor in front of an open door, and I guarantee you that door will stay open. For extra security, you can stick little rubber feet on the bottom. That way it won’t slide on your hardwood or laminate floor and scratch it all up. You do have a wood floor in the room you’re putting the skillet in, right? I mean, a skillet for a doorstop on a Berber carpet would look out of place.

National Artcraft Clear Polyurethane Bumper Pads with Adhesive Back Protect and Cushion Surfaces (Pkg/250)
Stick these on the bottom of your skillet to use it as a doorstop.
Buy Now

Back in the day, people used to put coals from the fire into these brass holding devices, and stick the brass containers into the bed to warm it up. Supposedly it kept your toes nice and toasty. Well, you can do the same with a cast iron skillet. Sure, it’s less fancy, but it’ll work just the same. Set the skillet next to the fireplace until it becomes warm to the touch, but not warm enough to scorch your sheets. Then stick it in the bed. You’ll want to make sure that you have de-seasoned this pan first, or it will leave greasy stains behind.

You saw Fellowship of the Ring, right? You saw how the cast iron skillet served the mighty Samwise Gamgee. The guy had no training, and no proper weapon, but he picked up his trusty skillet and waded right in to defend his friends. Be careful when fighting with a skillet as your primary weapon, though. They’re not very well-balanced, and will need substantial recovery time. Also, consider a lanyard, in case you lose your grip.

This can be a dual application with the doorstop or the bed warmer. When you hear that mysterious noise downstairs, the weight of a skillet in your hand can be very comforting when you go to investigate.

They make other stuff besides skillets out of cast iron.

Food (not Water!) Dish for Pets

You could put the dogfood in a skillet. Do not put the dog’s water in one: it will rust.

This is more of an outdoor use than one for around the home, but stay with me. Some campgrounds no longer let you build a fire outside of a container of some kind. A larger sized skillet is a very safe place to build a decent campfire, and it will keep the fire from spreading to leaves, dry grass, tree roots, what have you.  You still need to keep an eye on your fire, of course, and you’ll want to clean your skillet before you use it to cook tomorrow’s breakfast. Though it occurs to me that you’ll need it to build the cooking fire in, so, maybe you should bring two skillets when you go camping from now on. I hope you’re not a backpacker. Cast iron skillets weigh a ton.

This is another outdoorsy application. A skillet is really too small to use for anything squirrel-sized or bigger, but propped up on a stick, it’s just the thing with which to trap a chipmunk. Prop the skillet on the stick, tie a line to the stick, put some peanuts or something under the pan, go hide in the bushes, and wait. Sooner or later, a chipmunk will come along to eat the tasty peanuts. When he does, yank the string.

Now you have a chipmunk under a skillet.*

The Single-Action Shooter Society, or S.A.S.S., likes to hang things like cast iron skillets on their ranges. When you squeeze off a round, see the skillet jump, and hear that dull BONNNGGGG, you know you got the job done. You don’t have to wait for the judge to count the score. BONNNGGG! Hit. Loop a bit of rawhide through the hole on a handle. Use a lark’s head knot, or else the pan will tend to spin, or hang sideways, making it a difficult target. Face the bottom of the pan toward the shooter, or you will risk all kinds of crazy ricochets, and hang the target near your backstop to minimize danger.

One caveat: once you use a skillet for this purpose, do not use it to cook with ever again. There will be a thin smear of lead every place a bullet hit it. Lead does vaporize when it gets too hot. You don’t want lead vapor anywhere near your food.

Contest of Strength and Skill

There was a skillet-throwing contest at the County Fair last week. I didn't watch it, since my kids wanted to ride the tilt-a-whirls until they were dangerously close to needing a second lunch, but I imagine that it’s a lot like the hammer throw event at the Olympics. Be careful that nobody is standing downrange when you release your skillets.

Do not rig this system so as to drop the skillet on the intruder’s head. Booby-trap devices designed to cause harm are illegal, even for home defense. Besides, as I’ve mentioned before, cast iron skillets weigh a lot. If they hit someone just right (or just wrong) they can be deadly. When it happens to Daffy Duck, it’s funny. When it happens to your kid sneaking in after curfew, it means a trip to the ER for stitches and possibly treatment for concussion.

You can bang on darn near anything and call it a musical instrument. The fun part about using skillets is that they come in various sizes, so you can line them up and have a sorta-kinda xylophone type set-up. Use Dutch ovens for really low tones. This setup is non-tunable unless you want to spend a lot of time (and probably also money) until you get lucky enough to find skillets that all sound at a particular pitch. I suppose that if you had access to a machine shop you could also tune your skilletophone there, but it seems rather a lot of work.

You probably won’t be able to sell this concept unless you happen to be in a certain kind of band*, for example, a jug one.

*Apparently, there is also a band called Skillet. I had no idea.

This guy's pretty good on the ol' skillets, eh?

What’s a branding iron but a piece of metal that you make really hot by sticking it in the fire? You’ll want to use an oven mitt, and really, unless you work for the Waxing Crescent Ranch, this application is a bit limited for cattle identification. But maybe you’re working on a project with that woodburning kit your Aunt Sally gave you last Christmas, and you need a curved line that happens to be that exact radius. Your skillet will serve you well.

Update: Apparently, there IS a Crescent Ranch! 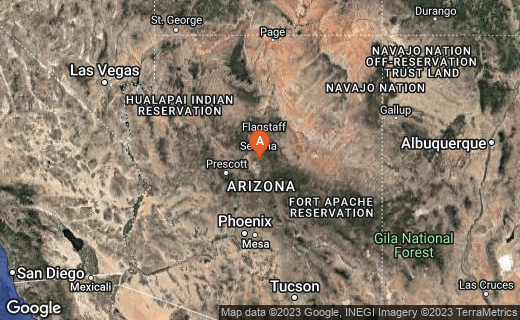 Here it is, smack in the middle of Arizona. Who knew?