David Bowie might be one of the most unlikely blue-eyed (or more accurately, one blue eye and one green eye) soul singers in music history. Born in the bombed-out London neighborhood of Brixton in 1947, the pale, skinny, sometimes emaciated singer became known for his elegant, continental image and eclectic, artsy lyrics on his songs beginning in the late 1960s. But in the early 1970s-- on the high heels of his glam rock success and international stardom-- Bowie became fully enamored by American soul music and R&B culture with a zeal that has influenced his work and his life ever since.

With his 1973 album Aladdin Sane, Bowie began experimenting more freely with Jazz and Soul. Studio musicians were encouraged to add avant guarde jazz musical elements to the mix, virtuoso singers with Soul and R&B bona fides were highlighted, and Bowie soaked up American music influences on his US tour. The result was a seminal album with American influences that started Bowie’s love affair with American Soul and R&B music.

Bowie’s growing interest in American Soul and Rhythm and Blues manifested itself most demonstrably in the “Young Americans” album. Recorded in Philadelphia’s Sigma Sound Studios—where the great Gamble and Huff songs of the mid-1970s were laid out—Bowie booted his regular compliment of studio musicians for an entirely new group that included many future stars. Singer Luther Vandross, saxophonist David Sanborn, guitarist Carlos Alomar, background singer Ava Cherry, and others were introduced to a larger audience by David Bowie’s amazing “Young Americans” album.

Even as Bowie changed and evolved over the years—gravitating periodically toward punk, techno, pop, and alternative rock—many of the musicians contracted for his soul music album “Young Americans” remained as part of his trusted stable of musicians. Others became stars in their own right. Periodically, Bowie has done soul influenced music since, and even wandered into Jazz Vocal territory.

In 2012, David Bowie celebrated his 20th anniversary of marriage to Somali-American model Iman, with whom he has one daughter.

One Saturday morning in late 1975, I was watching “Soul Train” as Don Cornelius introduced a pale, emaciated white British singer with orange-red hair he called “David Boo-ey.” Don was usually up to date on trends and music, but he appeared to know very little about his guest. He mostly let the audience interview the unlikely singer before Bowie launched into a lip-synched version of “Golden Years.”

Mr. “Boo-ey” did a crappy job of lip-synching on the stage by himself, but the Soul Train dancers were digging it. Bowie followed it up with “Fame,” which got some of the most vocal encouragement I’ve ever heard from the Soul Train audience and dancers. The studio recording of “Golden Years” remains an infectious dance song, even three and a half decades later.

It must have been really something special to peel off the cellophane on David Bowie’s 1975 album Young Americans and set the record player arm down on the first cut of the record, the title track. The song starts out funky and soulful enough, with David Sanborn’s saxophone and Bowie’s smoky vocals grooving against the bouncy Philly groove. But 49 seconds into “Young Americans” comes the powerful, blasting, soulful background vocals led by an unknown 23-year old singer named Luther Vandross. And…. Wow!

Most of the Young Americans album was recorded at Sigma Sound Studios—home of some of the classic Gamble and Huff soul songs of the 1970s—and featured a band that included Sanborn, Vandross, Ava Cherry on backing vocals, Willie Weeks on bass, Carlos Alomar on guitar, and Sly and the Family Stone drummer Andy Newmark.

Even more powerful than the music itself is the implicit message in the lyrics of the song—that the African-American experience in America is an essential, often central element of the American experience. In 1975, that was a rarely-held concept that could probably only be observed and properly celebrated by someone looking at America from the outside.

Bowie and his band performed the song live on December 4,1974 on the Dick Cavett Show, nearly three months before its release. The song reached #28 on the Billboard Hot 100, his biggest American hit to date. Rolling Stone magazine ranked "Young Americans" at #481 on their December 2004 list of the 500 Greatest Songs of All Time.

Bowie’s 1974 concept album inspired by George Orwell’s novel 1984 included the title track, which could have been a theme song from a futuristic Blaxploitation film. It had all the necessary elements—a foreboding minor key, funky rhythm section, lyrics depicting a hopeless urban wasteland, prominent strings juxtaposing the elegance of art versus a gritty urban reality, and an evocative vocal (albeit with a hint of a British accent).

It stacks up beautifully against some of the best Blaxploitation film themes of the early 1970s, but with an added futuristic Bowie touch—funky, high-tech, and evocative. Bowie and the “Young Americans” band performed the song live on the Dick Cavett Show on December 4, 1974.

Bowie’s turn to soul music during the mid-1970s was not completely unsurprising. Several songs on his 1973 follow-up to the Rock classic Ziggy Stardust and the Spiders from Mars tipped his hand on an embrace of soul music, especially the haunting final track, “Lady Grinning Soul.”

There were considerable soul influences in “Aladdin,” especially the wailing vocals of Linda Lewis and Juanita “Honey” Franklin on “Panic in Detroit” and free-form jazz piano by Mike Garson on the title track. In fact, elements of Bowie’s affinity for soul and R&B—derived from the electric blues—had been evident on songs from earlier albums such as “It Ain’t Easy” and “Soul Love” on Ziggy Stardust, “Black Country Rock” on The Man Who Sold the World, and “Changes” on Hunky Dory.

The song was said to be inspired by soul music singer Claudia Lennear.

The B-side on Bowie’s #1 American single “Fame,” “Right” is an easy-going groove that makes great effect with the call-and-response and vocal trade-off with his top-notch background vocal group led by a young Luther Vandross. With a funky, understated groove and a smooth, powerful vocal trading off with his background singers, the song also shows Bowie’s ability to let others step forward to be the star as the impeccable background vocalists take the song home.

Although Bowie had retreated to Berlin in 1976 to shake his cocaine addition, his lingering fascination with soul music was obvious on his tech-influenced album. The music journalism Web site Pitchfork proclaimed Bowie’s 1977 album “Low” the #1 album of the 1970s. The most prominent song on Low was the way-ahead-of-its-time song “Sound and Vision,” which served as a template for new and creative instrumentation by soul music bands in the late 1970s.

Funky, danceable, elegant and innovative, “Sound and Vision” was a song that had a deep and lasting footprint on R&B, Disco, Soul, Rock, and Electronic music. Like a lot of the most important songs ever recorded, it was not initially well-received, but gained in stature as it aged.

With fellow Brit Superstar John Lennon as his seemingly unlikely writing partner, Bowie wrote and recorded one of the funkiest, mainstream dance hits of the mid-1970s. Lennon was also a soul music fan, particularly of the early 1960s Soul from Chicago and Motown.

Fame and the cover version of “Across the Universe” were the only two songs from the Young Americans album recorded in New York rather than Philadelphia. But Bowie’s immersion in Philly soul during the recording of “Young Americans” drew Lennon into perhaps his most soul-inspired performance since The Beatles’ remake of “Twist and Shout.”

Initially considered as the title track of the album, the funky writing collaboration between Bowie and Luther Vandross is an underappreciated gem often ignored by the fans of both music giants.

Bowie is maybe at his soulful vocal apex on a song first recorded by his close friend and Punk pioneer Iggy Pop. As polished and professional as the band is on this cut, their antiseptic Caribbean arrangement of the source material drains some of the soulful potential from the song.

A funky, synth-laden dance groove produced by Chic’s Nile Rodgers-- and featuring the soulful blues guitar riffs by Stevie Ray Vaughn. The combination of sounds and influences disguised the song’s import when it first came out, but it has aged well and served as an influential template.

Poignant, plaintive, and sung largely in falsetto, "America" was the theme to the film The Falcon and the Snowman. The music was composed by Jazz musicians Pat Metheny and Lyle Mays, and Bowie was asked to write and record the lyrics.

Written by Bowie and Iggy Pop for Iggy's 1977 album Lust for Life, Bowie gives it a reggae flavor and softens the song's grim message in a duet with Tina Turner. "Tonight" only reached #53 on the UK charts, but it remained a favorite of Turner's.

Bowie's voice goes from low growl to high notes (two and a half octaves?) in 40 seconds.

Bowie's biggest hit and his only song to reach number one in both America and the UK. 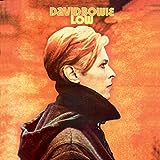