Acting is by far one of the hardest professions to obtain regular work in and harder still to achieve any success, fame or wealth in. The glamour and opulence of celebrity is extremely alluring and the prestige of being branded a great thespian can leave one quite dizzy.

However as with anything desirable it's something that many people want and only a few will have bestowed upon them. To make it as an actor or actress it seems fairly logical that one should know how to act, there are many different acting techniques that you can apply to your craft, here are some of the most popular and effective.

Shakespeare has a body of work that is so prolific and has been so influential it has yet to be rivalled by any other writer to date. However it is by far one of the most difficult acting styles to pull off successfully, performing in a production of one of his plays is also one of the most sort after acting opportunities there are and is a serious thespians dream. Attempting to learn 'Olde English' is comparable to learning a foreign language and remembering your lines is terribly difficult, especially lengthy monologues. However there are a few acting techniques for Shakespeare that will help ease the complexity of your role.

Firstly watch the film of the play that you have been cast in and make extensive notes. Practice frequently delivery, pronunciation and projection. Think about just how old the play is, and how different society was in Shakespearean times. Think about the plays content, message and your characters purpose to the play and the feelings your character would be experiencing. Spend some time learning old English, knowing what you are saying will bring with it conviction rather then just reeling of a few memorized words seemingly meaninglessly. Practice in front of a mirror, check your posture, breathing and reaction stance. 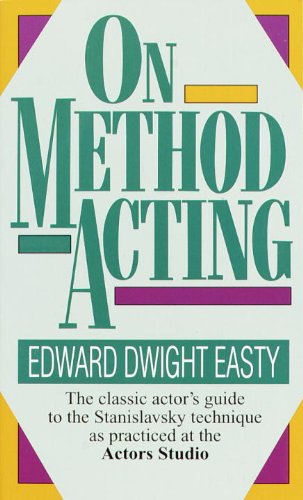 On Method Acting: The Classic Actor's Guide to the Stanislavsky Technique as Practiced at the Actors Studio
Buy Now

Method acting involves adopting the lifestyle, habits or traits that are a reflection of the character you are trying to portray. Immersing yourself heavily into your characters mindset, will enable you to understand their motives or actions and gain a better understanding of how they feel. As a result you portray them with greater accuracy, many successful actors and actresses have adopted this particular method and as a result gained awards and praise for performances using method acting. Based on the theories of Stanislavsky of which I will go into later 'the method' as it is also known is associated mainly with Lee Strasberg.

Constantin Stanislavski influenced the acting world so greatly that most modern acting techniques, stem from Stanislavskian approaches. Stanislavski acting involves analysing the script and segmenting it. Looking at what method a character resorts to, to over come obstacles and reach their objectives. Which of the three path's of action would they pursue, would they give up when faced with an obstacle, find a way to solve their problem or carry on regardless of their plight? His emphasis was on realism and accurate reflection of reality by using exercises like the 'magic if' what would you do if this happened to you and why do you think your character would act in this way.

The Brechtian approach includes acting formats such as stereotypes, using placards, ensemble and montage. Bertolt Brecht was the father of epic theatre, his goal was to influence the audience into thinking about society and encouraging change within it. He placed great emphasis on gesture for the demonstration of emotion. He believed message was superior to character, the story and situation itself to be more important then the personal challenges within the situation. Brechtian theatre demonstrates and allows for various acting styles to co-exist.

Artaud thought very differently to Brecht, his thinking placed heavy emphasis on invoking deep routed feelings through acting. He believed the theatre was about action and the element of surprise. His theatre of cruelty approach, of which he is better associated with, takes acting to the subconscious level. Using painful memories and strong feelings to invoke strong emotion. Antonin Artaud thought less of words and more of profound impact. Whereas Brecht wanted the audience to go out and change society Artaud wanted them shaken to their soul and to look within and make Changes within themselves.

Sanford meisner's technique is predominantly placed on self, circumstances and affect on and reaction to others. Repetitive dialog is used as an exercise, this enable actors to play on action and reaction, depending on how the line is delivered at that moment. It's about considering the characters objective, reading tone and body language. Meisner's cause and effect type teaching helps the actor to attune themselves to the community of the performance, who is friend and who is foe. What is the catalyst of change and how as a character you deal with change and the chain reaction that follows it.