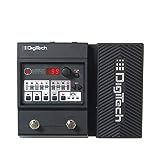 Review of the Digitech RP255

With the RP series of guitar multi-effects units, Digitech have created a rich palette of quality sounds, coupled with genuinely useful creative tools such as the 20 second looper and drum machine.

One of the reasons that the new Digitech multi-effects units sound so good is that they are armed with the new AudioDNA2 chip. Rather than using general purpose digital signal processing chips, Digitech have created a powerful processor specifically designed by cutting edge engineers to provide impressively accurate sound modeling with dynamic interaction in each tone. This extra power is noticed immediately, for example in the responsiveness to changes in volume using the guitar, thereby cleaning up or thickening distortion.

Features of the RP255

The RP255 falls somewhere in the middle of the RP series and is equipped with an excellent variety of features which represent amazing value for money. Features include:

The RP 255 simulates the sound of over 20 popular amp models, many very convincingly, especially if used in conjunction with an actual amp of decent quality. After toying with the amp models offered, standouts are the ’57 Fender Tweed Champ, and ’65 Fender Blackface Twin Reverb, offering sparkling cleans, the ’68 Marshall 100 Watt Super Lead (plexi)and the ’93 Marshall JCM900 for high gain, fat tones. The ’96 Matchless has lovely, powerful, warm tube tone too. Other fun simulations include a Dreadnought acoustic, Messa Boogie Mark II and Rectifier, ’62 Vox AC 15 and AC30 Top Boost and Soldano SLO-100.

Amp models can be matched with a variety of cabinets including famed Fender and Marshall cabs. Matching amps and cabinets can produce major tonal variations. Again, the potential of the RP’s ability to deliver quality tones is very much dependant on the amp that the signal is going into. I was using a Fender Pro Junior and a bit of tinkering was required to find tones that pleased my ears, but they were there to be discovered. It’s also possible to choose a direct setting without amp modeling.

Being a fan of analog stomp boxes I’m always wary of multi-effects units sounding too lifeless and digital but this unit really can deliver great delay, reverb, chorus, and even surprisingly thick distortion that doesn’t lose the high end or kill the personality of your guitar. Set aside a big bank of hours to get lost in the plethora of possibilities – it’s a gas to play around with combinations of effects that you never had in stomp box form. If you were to buy stomp boxes for all the effects offered you would be looking at a bucket load of dollars.

Here’s a quick rundown of what you get:

Pickup simulator: fatten single coil tones by setting to humbuckers or the other way around. I play both a SG and a Strat and this simulator is praiseworthy.

Wah: I actually prefer the wah on the RP255 to my Dunlop Crybaby, no kidding. By pressing down on the expression pedal you can engage the wah in any setting.

Compressor: based on a Boss CS2 and Digitech

Distortion: big surprise here; I normally despise the thin distortion of multi-effects nits but the Tubescreamer simulations are outstanding as is the MXR distortion and Big Muff Pi. 13 popular pedal sims to choose from here.

Chorus: based on a Boss CE2 and Digitech models; would have liked a small clone as well.

Delay: great variety delay options including analog, digital, modulated, pong and tape with up to 5 seconds delay time. Messing around with the repeat and level settings can produce some exotic sounds

Reverb: spoilt for choice here also with Lexicon reverbs including ambience, studio, room, and hall, all with wide parameters for liveliness and decay. The Fender Twin reverb and EMT240 are good also.

Flanger: the MXR is excellent

Other effects include Vibrato, Rotary Speaker, ViboPan, Tremelo, Panner, Envelope Filter, AutoYa, YaYa, Step Filter, Whammy, Pitch Shift, Detune and Harmony Pitch Shifter , EQ and Noise Gate– all of which deliver decent tones with some tweaking. The Digitech Whammy if bought separately costs more than the RP255! The expression pedal can be assigned with any of the parameters for each effect giving a lot of control in performance mode.

Besides providing a huge array of quality effects, the RP255 offers some powerful songwriting tools. A built-in drum machine is loaded which 60 useful patterns that include simple beats, as well as rock, blues, jazz, hiphop, world, hard rock, metal, groove, country and a metronome. The 20 second looper is ideal for riffing over rhythm phrases and experimenting with chord progressions, adding a baseline using the overdub function and then a lead pattern. It’s a shame that the drum machine can’t be engaged while the unit is in looper mode. You can also plug in your MP3 player and jam along; headphones are best here.

To take your creativity a little further the RP255 comes with a USB port so that you can adjust parameter settings using the editing software which can be downloaded from the Digitech website and to use the Cubase LE4 software that come with the pedal.

At around $150 the RP255 is insane value. It won’t replace quality stomp boxes like MXR, EH, Analog Man etc. for the organic tones that $150 a pedal buy you, but 94 amps, cabinets, and effects with a looper, drum machine and Cubase recording software thrown in for $150 is a pretty good deal! I only wish I had had one of these at my disposal 20 years ago when I was jamming alone in the bedroom. If you intend to use one of the RP’s for performing on stage you would be well advised to go for the RP355 or higher so that you have the built in stomp box feature for changing effects on the fly. This is a solidly built unit and bags of fun for messing around with musical ideas in the bedroom.

Here are some other music related articles you might want to check out:

What is your favorite guitar multi-effects pedal maker?