If you've ever wanted to have a body like some of the fittest celebrities then you need to mimic the fitness program that they used in order to see similar results.

When you see the bodies of celebrities like Cam Gigandet, Bruce Lee or Terrell Owens you might be thinking that you could never have a body like theirs.

But by the end of this article you'll know the fitness program that they used to get these results and can mimic what they did to achieve the same kind of ripped body!

If you've seen the movie Never Back Down, you might have noticed that Cam's not afraid to take his shirt off and for good reason; he's ripped! So how did he build such a good looking body? Well first of all, he was working out 5 days a week to prepare for this movie.

He worked his chest on Monday, his back on Tuesday, his shoulders on Wednesday, his arms on Thursday and then did 45 minutes of cardio on Friday.

To help you avoid overtraining you'll want to pick compound exercises and avoid using a bunch of isolation exercises. This will keep your workouts shorter but will also help you stress the highest amount of muscle fibers as possible. And for your cardio you'll want to do intervals to really help fuel your fat burning furnace. You're not going to get your abs to show if you don't melt off that gut first! But there is one key to achieving a fit body that most people ignore and that's their diet.

Cam was on a typical bodybuilder diet that consisted of high protein and low carbohydrates. So if you want to help supercharge your efforts in the gym you need to be eating things like skinless chicken breasts, salmon, tuna, brown rice, yams and tons of vegetables. Don't forget to eat fruit too, but you'll want to keep your fruit intake more toward the beginning of the day or post workout. Steps like these can help you build a body like Cam's but there is another martial artist's physique that will always be talked about.

Bruce Lee sadly passed away in the 70s but is still talked about to this day on an immense scale for many different reasons. He created his own martial arts style, dominated a movie genre and had one of the fittest bodies of all time. Even Arnold and Lou Ferrigno have talked about how Bruce Lee's body influenced them. He was so ahead of his time that he even had special machines constructed because no one had created the workout equipment we all have access to today. No, he wasn't so big that he had to walk sideways to fit through a doorway but his entire body was completely functional and well conditioned. This man was powerful, so powerful that you wouldn't have wanted to take a punch from him no matter how big you are but how did he build such a body?

Bruce Lee trained all the time whether it was doing curls while he watched TV or martial arts training, but you don't have to be that obsessive. Bruce would workout three days a week so that he wasn't sore for martial arts training. He didn't aim to pack on extra weight, because he felt that it slowed him down, so he made sure that his workouts were functional and not so much mass-building.

He did a lot of compound movements along with isometric exercises. He performed exercises like the clean and press, squats, pullovers, bench press and deadlifts to work his muscles in a more natural way. When you're moving around in your daily life, very rarely do you isolate a single muscle so that's why Bruce chose to do these types of compound exercises. And isometrics are exercises where you exert a force against an immovable object for a certain amount of time. You contract your muscle while keeping your joint stationary to help you build up muscle strength at that specific joint angle. This can be a great help to you if you have stall points in some of your lifts. By training often with compound and isometric exercises you can condition your body to be just as functional and powerful as Bruce Lee's but maybe you're more of a sports fan and don't want the body of a martial artist.

If you follow football at all then you've definitely heard of and seen Terrell Owens at some point. Most people might assume, after seeing his body, that he's into pumping iron in the gym like most guys but you might be surprised to find out why he's called "The Rubber Band Man". Yes, TO likes to workout using resistance bands! He uses them so much that he came out with his own workout program to go with the Bodylastics line of products. He set up his program so that people could achieve fast muscle gains in the safest way possible. So what exactly does a Terrell Owens workout look like?

Terrell workouts about 5 days a week in the off season and likes to warm up on his stationary bike for about 7 minutes before breaking out the resistance bands. He uses resistance bands because they do very little damage to your muscles and joints and are great for home workouts. He used them during rehab after an injury and has been hooked ever since. His workouts consist of a variety of different exercises structured through supersets, drop sets and pyramids and he jumps rope for 30 seconds between each set. Instead of resting between sets he chooses to amp up his metabolism by utilizing an active "rest".

But you should never assume at any point that people achieve bodies like this just through a good workout. Terrell eats a very clean diet in order to maintain such a muscular and well-defined physique. A typical breakfast for TO is a bowl of oatmeal and 10 egg whites. Sure, that doesn't sound like it's packed full of flavor but when you want a body like that you make a few sacrifices. And it's not like you can't sprinkle in your favorite seasoning! ;) So there you have it; the basics of what it takes to build a ripped body like some of the fittest celebrities.

The steps these 3 guys have taken are proven to help ANYONE build a body that they can be proud of. When you are consistent with your fitness program, utilize safe, compound and isometric exercises and eat a clean diet then you can expect your own "oohs and ahhs" when you take your shirt off. You can now build a body that even some celebrities would be envious of. 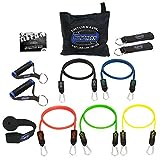 What Fitness Program Do YOU Use & What Are Your Results?