Ah, yes, Duran Duran. Those five impossibly beautiful boys from Birmingham, England, who conquered the world with their music in the early 80s and helped define an era.

Formed by friends Nicholas James Bates (who later changed his name to Nick Rhodes) and Nigel John Taylor (who later went by his middle name because he couldn't think of any famous rock stars who had ever been named "Nigel") in 1978, Duran Duran was born during the "New Romantics" era of British pop but flowered and flourished as their unique brand of part Miami Vice/part pure sexy pop that defined the 1980s.

While every girl has her favorite Duran Duran member, mine has always been John, and it is interesting to look at the evolution of the Brummie's gorgeous self as it changed through the years.

When Duran Duran first began playing gigs, the 'New Romantics' era was in full swing in English clubs. While the precise definition of 'New Romantics' is hard to pin down, it involved wearing lots of makeup, outlandish hair, and playing music that was reminiscent of David Bowie.

John's look - like most other New Romantics bands, including Culture Club and Spandau Ballet - involved colored hair and, in this picture, pirate costumes. Many people would not recognize the Duran Duran they're familiar with from this picture, since Andy Taylor's hair is sort of a poofy white mushroom and Nick's hair is fire-engine red. Only drummer Roger Taylor would make it through Duran Duran's entire career without drastically changing his look.

During this time John's hair wavered between his natural brown color and a reddish tint, as he began to come out of his shell and realize how truly hot he was. Fortunately this trend continued as we entered...

It was during these years that the world began to truly notice Duran Duran. What was a casual glance during their early years turned into a "Holy cow, who ARE these gorgeous British guys?" thanks to a tiny new TV channel called MTV and a modest little music video called "Hungry Like the Wolf".

MTV debuted in 1981, giving musical artists a brand new outlet through which to sell themselves. Suddenly having smashing good looks could get you just as much exposure as being talented, and thanks to their pretty pusses 'Duran Duran' was everywhere. Their lush videos, among them the sultry 'Save a Prayer' and peppy 'Rio', put a high gloss on their natural appeal and girls couldn't get enough of them.

During this time John perfected his blow-dry handsomeness, sporting lightly feathered locks that draped in a sexy way down the back of his neck. He also began to experiment with two-toning his hair, flirting with light-blond bangs to accent his stunning brown eyes. Puppy-dog adorableness was maturing into full-blown Bass God...

By 1984 the entire world knew who Duran Duran was, and the band responded to that adoration with a self-absorption that bordered on solipsism. Everything about them - their music, their look, and their hair - became bolder, bigger, wilder and more ambitious. Gone were the close-clipped locks and simple, unadorned suits - now Duran Duran as all about glamour, and tons of it.

1984 saw the band embarking on a huge, hysterical tour chronicled in the documentary 'Sing Blue Silver'. Everyone they met was starstruck, from preteen girls to Coca-Cola executives, and television cameras were there to capture it all. Crowds of young girls nearly crush their fellow concertgoers in a rush to be the first to get through the arena doors; reporters snap what seems like thousands of pictures while the band just stands there and smiles blandly; the band's manager, Spy Matthews, insists that his boys get Stolichnaya vodka, even though it's almost impossible to get because it's Russian and in the '80s that was very firmly behind the iron curtain.

This was when John's hair, much like John himself, became sexy on overload. The blond bangs nearly took on a life of their own, and his hair grew to a lengh rivalled only by fellow guitarist Andy Taylor. Sometimes it looks tousled, sometimes groomed, but John would keep this look until, like the future of the band, his hair began to take a darker turn...

No discussion of Duran Duran's hair would be complete without a mention of the very brief, very mulleted 'Wild Boys' era.

Born out of the band's - specifically, Simon's - desire to go completely butch, thus shedding their glossy boy band image in favor of something more, you know, 'Mad Max'. Luckily, director Russell Mulcahy, who had worked with them on the 'Rio' video and would later helm 'Highlander', had just read a book called "

The Wild Boys: A Book of the Dead" by William S. Burroughs and was itching to make a feature-length film on the subject, a bleak account of cannibalistic young thugs living in a post-apocalyptic England.

The resulting video, "Wild Boys", was the most expensive video ever made up to that point, costing more than $1 million, and marks something of a high point of Duran Duran's look - or low point, depending on your taste for leather and mullets. Things explode, blue-skinned dancers cavort, and Simon gets strapped to a windmill, making this video more about the dangers of Dutch architecture than anything else.

Every single member, except Roger, sports hair past their shoulders and teased to within an inch of its life. Simon's hair has exploded into a full-out blond shag, and even though Andy only appears for a moment you can spot what looks like a big, poofy poodle growing out of his head, with a long shaggy tail.

John, fortunately, keeps a fairly reasonable wavy 'do, and keeps that pretty look even when he's tied to a car and, um, being tortured, or, something. Fortunately, the entire band survives its ordeal and lives to ride in a car at the end of the video. Watch for Simon having a gigantic piece of confetti land square on his eyeball...

By 1985 Duran Duran was exhausted. Four years of a brilliant ascent left all five band members burned-out and frazzled. Each responded in his own way, but the most common yearning seemed to be to do something that was NOT related to Duran Duran. To wit: forming other bands.

They all insisted Duran Duran was NOT breaking up, of course. John and Andy, who wanted to experiment with a more rock-oriented sound, formed The Power Station with singer Robert Palmer, drummer Tony Thompson and producer Bernard Edwards.

Simon, Nick and Roger, meanwhile, all decided to try their own hand at alternative music and simultaneously formed Arcadia and dyed all of their own locks jet black. The look was interesting, to say the least, especially on the previously oh-so-blond Nick. Of course, after "Wild Boys", it's arguable whether the band's hair was dyed black, or simply went black out of mortification.

John, by now tired of the two-tone bangs, elected to let his hair grow VERY long, and go his own shade of very dark. Thus began the era known as "vampire John", and arguably his sexiest look ever. He would keep his luxurious locks for a while, through the 'Power Station' years, Duran Duran's 'Notorious' album and his single "I Do What I Do", and not shear them off until about 1988, when Duran Duran, now minus Andy and Roger, recorded 'Big Thing'. A nation mourned.

Fast forward to many, many years later, where does the band hair stand? Or, flop?

It's hard to say; everyone has a different opinion. Suffice to say that we've all gotten older, and the mullets and gloriously rainbow hues of yesteryear are but a fond peroxided memory.

But luckily, Duran Duran is still stylin' (minus Andy at the moment) and since the band is still very much around, may even bring their hair and talent to a venue near you. They released a new album in 2007 titled '

Red Carpet Massacre' and have as of February 2009 just entered the studio to work on a new album.

John's hair has its moods as well but the Bass God is still gorgeous, as evidenced by the above picture taken in 2006. My guess is he'll still be stunning when we're all octogenarians, but I am a bit biased. :-) 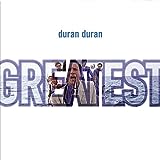