Chord Chart For The Songs

Try to keep your thumb planted in the middle of your hand at the back of the neck (between your middle and ring fingers). Stay up on the tips of your fingers, do not let them collapse down across the other strings. If one finger is ahead of another (for example, in the first chord, G no.2, the second finger on the sixth string is ahead of the first finger on the fifth string), bring your first finger up close to the second finger to free up the open fourth string. The first finger should be tucked in behind the second up against the sixth string. Any part of a finger touching these open strings will cause an unwanted buzz or a complete mute. This is a common problem with beginning players.

I have always called this shape of the G chord G no.2. You may see it named differently by someone else. It is just a G Major chord. The only note added from the normal shape is the D on the second string. This note is the fifth interval of the G Major triad and is already contained in the open chord an octave lower on the open fourth string.

Wish You Were Here

This is a strumming chart for Pink Floyd's masterpiece 'Wish You Were Here'. The strumming pattern is comprised of eighth and sixteenth note rhythm slashes. This usually means a slow tempo.

I have notated the pattern in the first measure. Treat the eighths as downstrokes and the sixteenth note combinations as down-up. If the note durations were doubled (eighths become quarters, sixteenth become eighths), the strum direction would be the same. The third and fourth fingers are held on the same notes throughout the intro and refrain. When changing these chords, do not move these fingers. 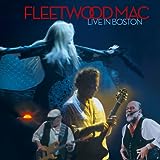 Fleetwood Mac - Live in Boston (2 DVD + 1 CD)
This special 2 DVD/1 CD package is Fleetwood Mac's first U.S. live album in 24 years! The package includes many of their greatest hits as well as songs from their most recent album. A 60 minute version of this concert will be airing on PBS' Soundstage.
Buy Now

This is quite simple as far as chord progressions go. Basically two chords throughout the song. The Am only shows up in the second line of the solo.

The strumming pattern is quarter and eight note rhythm slashes. There is a tie on the 'and' of the second beat to the 'three' of the third beat. This creates a quarter note in the middle of the pattern. Let your strumming hand go by without hitting the strings on the first half of the third beat so that the second half of that beat (the 'and') starts on an upstroke. This is a very common rhythm pattern.

The G6 is a G Major chord without the G fretted on the first string. This adds an E to the chord (open first string), the sixth interval of the G Major scale.

Every Rose Has It's Thorn

This chart is similar to Wish You Were Here. The tempo is slow, the pattern is all eighths and sixteenth note rhythm slashes.

Whenever there is two chords per measure, I have notated the second half of the full pattern (two eights and four sixteenths). You could use the first half or the full pattern. As long as there is four beats to each measure any pattern would do. All of these transcriptions differ from the actual recording in this manner. Rarely would a rhythm guitar player stick to one pattern for the entire piece. In the same manner as Wish You Were Here, the third and fourth finger stay in the same position for most of the song. In fact the third finger should remain in place when making the transition into and out of the D Major chord. In this respect the third finger does not leave the fretboard until the Em chord in measure forty one. This will probably take some practice to master.

Hasn't Hit Me Yet

This is the most difficult piece of the lesson. The tempo is quite fast, the slashes are all quarters and eighths, but the strumming pattern in the intro and other sections of the song is quite difficult. There is a lot of syncopation in these sections (accenting the 'and' instead of the number). Your strumming hand is still maintaining a strict eighth note down-up pattern, but there is quite a few missed strums. For example in measure one and two, the 'and' of the first and second beat are missed on the upstroke, but played on the fourth beat, while the number is missed. There is also three different forms of a D chord in this section, as there is on the A chord between the first and second verse.

Work this pattern up very slowly, making sure all the stroke directions are correct. This progression has been used in many tunes and sounds great when executed properly.

The main pattern of down, down, down-up down is much easier to execute. Try to hit the bass notes of the chord on the first beat, then accent the second beat. This is a common country rhythm guitar sound.

To play with the song, capo on the 2nd fret