Why Elvis Presley is the King of Rock and Roll

Elvis was loaded with talent and charisma, but he never claimed to be a great musician.  He was instead an incredible performer and entertainer, and rose to fame at a time that singer/songwriters were more of a rarity than the norm.  He didn’t perform his own creations, but rather was a master of interpretation.  He was not only able to find the most gifted songwriters available, but frequently covered songs released by other artists and made them his own.

Most people with any familiarity with rock music know the basics about the King:  Elvis Aaron Presley, born January 8, 1935, in Tupelo, Mississippi.  His twin brother, Jessie Garon, was stillborn, and Elvis was raised as the only child of Vernon and Gladys Presley.  By all accounts, the family led a hard-scrabble existence.  Vernon did jail time for check forgery when Elvis was a toddler, and after his release, he had a hard time keeping a steady job.  After Vernon lost another job in 1948, the family moved to Memphis, where Gladys’ brothers helped him find a job, and the family moved into a public housing project.  Elvis graduated from Humes High School in 1953 and took a job at Parker Machinists Shop.  It wasn’t long before he got a job at the Precision Tool Company, and then drove a truck for Crown Electric Company.  (His trademark pompadour was the then-current truck driver style.)

In the summer of 1953, Elvis made his first visit to Sun Studioes to record a "vanity press" record at his own expense.  On that first trip, he recorded "My Happiness" and "That's When Your Heartaches Begin," accompanying himself on the guitar.  In January 1954 he was back, and paid to record two more songs, "I'll Never Stand in Your Way" and "It Wouldn't Be the Same Without You."   By this time, Sam Phillips had apparently decided that there might be something to this young singer.  Although he hadn't offered much in the way of encouragement, he had jotted down Elvis' address and phone number.

In June 1954, Phillips had Elvis come back into Sun Records to audition for a recording session.   He had begun to feel that Elvis was what he was looking for, "a white man with the Negro sound and the Negro feel."  Phillips arranged for Scotty Moore and Bill Black to back him up, and in July, the trio recorded several songs, including the single that became Elvis' first single - "That's All Right" and "Blue Moon of Kentucky." The rest, as they say, is history. 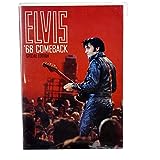 Elvis helped create the rock ‘n’ roll genre, and was one of its first real stars.  Described as “singing blues laced with country and country tinged with gospel,” Presley was able to blend widely differing musical types to create a compelling new sound.  By the time of his death on August 16, 1977, Elvis was an unparalleled legend.  He starred in 33 films, and has sold over a billion albums worldwide, earning gold, platinum or multi-platinum on an astounding 150 different albums and singles.  He also received a wide array of accolades, including 14 Grammy nominations (3 wins) and the Grammy Lifetime Achievement Award.  It’s hard to imagine that anyone will ever equal his accomplishments.

Elvis releases and their original artists: