Wesman Todd Shaw started playing the guitar when he was 12 years old. He loves nothing more than to pick one up and pluck some strings.

Eric Clapton has been a man most anyone who appreciates popular music has long known the name of and known he was special insofar as what he does. He was once even referred to as "god," here and there. His music, to me, is instantly recognizable, and I don't even have to hear him sing to identify it, I can just hear a little bit of his guitar playing, and I know who I'm hearing.

I've seen Eric Clapton perform live twice, the first time I was in high school, and my dad took me to see Clapton. It was a very loud heavy blues concert, screaming Stratocaster guitars and all the old hits along with the new songs from his album The Journeyman. The second time I saw Clapton live I was just out of high school, and I went with some friends of mine and we saw him just after the "unplugged" album, and this was just after his son had died. He did a nice and long acoustic guitar set during the show, and so I've absolutely seen Eric Clapton play these Martin guitars made for him.

Eric Clapton does a fine job representing the big three great American guitar manufacturers. When he was with Cream and at his very best as a guitarist, he played Gibson electric guitars, but for most of the time since then, he's been associated with Fender Stratocaster electric guitars. As an acoustic guitarist, when Clapton plays unplugged, he always plays Martin guitars, and why would he not? He's one of the world's most famous and loved guitarists, and so it is only fitting he play Martin acoustic guitars. It's also very fitting that there are more than one Martin model of guitar with Eric's name on it.

Eric Clapton with a Martin 000-28EC with Natural Finish

When the Martin 000-28EC debuted I specifically wanted to own one, and I had a good job and few bills. I went to go purchase one, but wound up leaving with an HD-28vr. Mostly I believe I'd just wanted to purchase a band new Martin, and that's what I did. I'm certainly sold on Martin guitars, and I'm in good company in that way. Eric Clapton agrees with me. Essentially the 000-28EC is going to be a slightly fancier version of the 000-28, and if you can and do spend for the 000-28ECB, you're going to be in possession of one of the finest small body acoustic guitars in the world. Of course all the "B" means in the model description "000-28ECB" is the guitar is the 000-28 Eric Clapton model with Brazilian rosewood. That guitar is going to cost a lot more than the base model with East Indian rosewood purely for the scarcity of Brazil's rosewood. In my experience, there really is a tonal difference between the rosewood of Brazil and the rosewood from East India. It's not like the almost indistinguishable difference, if any, in tone between Madagascar's rosewood and East India's.

Slightly less expensive than the 000-28ECB will be the 000-28ECM. Of course the "M" stands for "Madagascar." So there's all the differences in the final lettering, it's all about the species of rosewood. The guitars that are "just" called 000-28EC are all going to be of East Indian rosewood, a rather under-rated tonewood, in my opinion.

The 000-28 Eric Clapton models, of which there are the three I just hopefully explained above, are hardly the only Eric Clapton model Martin guitars. Eric is big into Martin guitars, and Martin guitars are rightly fond of Eric Clapton. If one wanted to really spend some money, the most decked out and expensive one I know of to date is the 000-42ECB, which is essentially the same guitar as the 000-28ECB but with more abalone inlay on it to make it sparkle and shine a bit more. 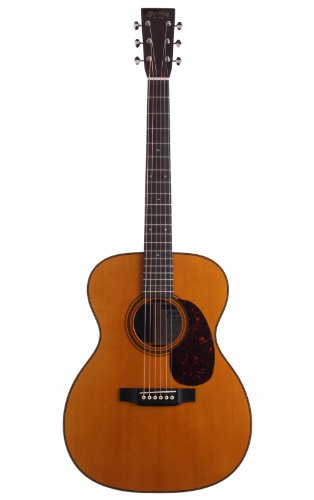 So why the 000 body size? Well, those body sizes have some distinct differences from every other body size of guitar. They're smaller than a dreadnought, and allow you to get your arms around the thing and play it more easily. If you're not comfortable playing a guitar for it's too large size, well, you're not going to be able to play as well as you otherwise would be. Eric Clapton may have other reasons for preferring the 000 size, the tonality of such instruments will be different, they'll not have the at times over-powering bass a dreadnought can have.

You can expect more balance and a stronger mid-range tonality from this body style guitar. You can also expect a tad less volume due to the smaller body. These are all rosewood guitars, and so they'll have a darker tonality, lots of overtones too. You should absolutely play various body style guitars to be certain of which body configuration suits you best before you purchase such a fine and expensive thing. There are so very many sizes and shapes and woods used in building guitars these days there is no doubt in my mind there's one out there which will suit you, and there's no doubt in my mind C.F. Martin & Company makes one perfect for your needs.

A Very Nice High Definition Photo Of the Martin 000-28EC

Specifications for the Martin 000-28EC