I work at home as a freelance writer. I enjoy reading, writing, and television.

Family Feud is a game show where 2 families (made up of 5 members each) compete against each other for a chance to win $20,000.

♦One person from each family goes to the buzzer. When asked a question, the first person to give the number one answer on the board (based on a survey of 100 people) wins the round. If the person guesses an answer that is not number one, the other family's team member gets a chance to guess. The person who wins then gets to decide if they want to play the round for themselves, or pass it to the other team.

♦The rest of the family members on the team that's playing now have to make guesses. If their answer is on the board, the next member guesses. If it isn't, they get a strike. 3 strikes mean that family is now done guessing and the other family gets a chance to steal. If they give just one answer that's still remaining on the board, that family steals the points. If they don't get it, the original family gains the points they had originally accumulated.

♦The first family to get to 300 points now gets the chance to send 2 of their members to the Fast Money round. The first person makes their guesses while the other is backstage. Then the first person goes back with the group while the second person takes their guesses. To win the $20,000, together the two must come up with 200 points within the 5 questions they are asked. If the second person's answer is a duplicate to the first person's, they will hear a buzzer which tells them to guess again at that question. The first person in the original show got 15 seconds to answer and the 2nd person got 20 seconds because it was harder. Now they get 20 and 25 seconds.

The very first host of Family Feud was Richard Dawson. He hosted the show from 1976 until 1985 when the show got cancelled. It returned in 1988 with another host. Dawson then returned as host in 1994 for one season until it was cancelled again.

Richard Dawson was also an actor. He is best known for his role of Corporal Peter Newkirk on the TV series Hogan's Heroes from 1965 to 1971. He passed away in 2012 at the age of 79.

The second host of Family Feud was Ray Combs. He hosted the show from 1988, when it was revived, until 1994, when they replaced him with original host, Richard Dawson.

In 1996, Ray Combs had trouble getting gigs. His home went into foreclosure. His wife left him. At the age of 40, Ray Combs sadly committed suicide.

The third host of Family Feud was Louie Anderson. He hosted the show from 1999 to 2002. He was then replaced with Richard Karn.

Louie Anderson appeared in the film Coming to America, with Eddie Murphy. He also had a tv series called Life With Louie from 1996 to 1998. He is still a working comedian and actor, playing on the FX show, Baskets from 2016-2019. He's got other titles under his belt already or in the works.

Richard Karn is most well known for his role of Al Borland on the television series Home Improvement, where he starred next to Tim Allen. He also hosted the show Bingo America in 2008 and has several other movie and TV roles under his name or in the works.

John O'Hurley is an actor who is most known for his role in Seinfeld from 1995 to 1998. He has appeared in many other shows and movies, including Devious Maids, Malibu Dan the Family Man, and 7 Days to Vegas. He has several projects underway.

The sixth and current host of Family Feud is Steve Harvey. He has hosted the show from 2010 to present. In 2015, he added Celebrity Family Feud to the mix.

Steve Harvey had his own show called, The Steve Harvey Show, from 1996 to 2002. He brought a version of the show back, just titled Steve Harvey, and later only Steve. He has also appeared in several movies including The Fighting Temptations, Love Don't Cost a Thing, You Got Served, Johnson Family Vacation, Racing Stripes, and Madea Goes To Jail. He also hosted Little Big Shots.

Who Is Your Favorite Family Feud Host? 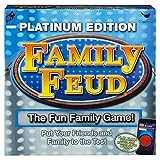